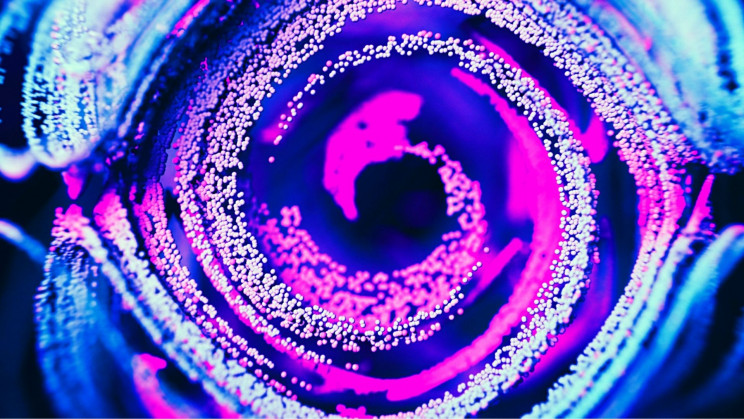 A 3D-rendered image of nanoparticles.koto_feja / iStock

New drugs are created all the time.

And many are extremely dangerous.

This is why researchers trained computers to predict what designer drugs will emerge onto the scene before they hit the market, according to a recent study published in the journal Nature Machine Intelligence.

With highly-addictive drugs flooding regions throughout the U.S., this program could save countless lives. But it could also unlock an entire “dark matter” world of unknown psychoactive possibilities.

Controlling synthetic opioids, bath salts, and other drugs is a primary goal for law enforcement agencies, even while unaccredited chemists continue to create and distribute new molecules that can trigger the same psychoactive effects as conventional drugs, abusive and recreational. But the process of evaluating and pinning down these “legal highs” within seized pills or powders can take months, or more, while thousands of people are already trying new designer drugs for the first time. This is why new research has set out to help law enforcement agencies globally lower the timeframe for identifying new designer drugs from months to days in the race to regulate emerging ever-newer versions of potentially dangerous drugs.

“The vast majority of these designer drugs have never been tested in humans and are completely unregulated,” said Michael Skinnider, a UBC medical student who has finished his doctoral research at the UBC’s Michael Smith Laboratories, in a press release. “They are a major public health concern to emergency departments across the world.” Skinnider and his colleagues employed a database of psychoactive substances already given to forensic laboratories worldwide to train an artificial intelligence (AI) algorithm, so it could come to know the structures of each drug’s molecular makeup. The algorithms involved a deep neural network, which takes its cue from the operations and structure of the human brain.

A new ‘dark matter’ world of synthetic drugs at our fingertips

Using this training, the model then provided the structure of roughly 8.9 million possible designer drugs. Okay, that’s a lot of drugs. But it went even further: each of these molecules was then juxtaposed with 196 new designer drugs that showed up on the black marketplace after the model completed its training. And more than 90% of the real-world drugs were already accounted for in the AI’s generated collection of new designer drugs. Impressive. “The fact that we can predict what designer drugs are likely to emerge on the market before they actually appear is a bit like the 2002 sci-fi movie, ‘Minority Report’, where foreknowledge about criminal activities about to take place helped significantly reduce crime in a future world,” said David Wishart, the senior author of the study who is also a professor of computing science at the University of Alberta, in the release.

“Essentially, our software gives law enforcement agencies and public health programs a head start on the clandestine chemists, and lets them know what to be on the lookout for,” added Wishart. The model also revealed which specific molecules were more likely to show up on the black market, and which probably wouldn’t appear. “We wondered whether we could use this probability to determine what an unknown drug is — based solely on its mass — which is easy for a chemist to measure for any pill or powder using mass spectrometry,” said Professor Leonard Foster of the UBC’s biochemistry department, who’s also internationally recognized in his expertise with and on mass spectrometry, in the release. But in addition to helping save lives affected by novel and dangerous synthetic drugs, this could unlock an entire “dark matter” world of new drugs, both helpful and harmful, all discerned with neural network AI.