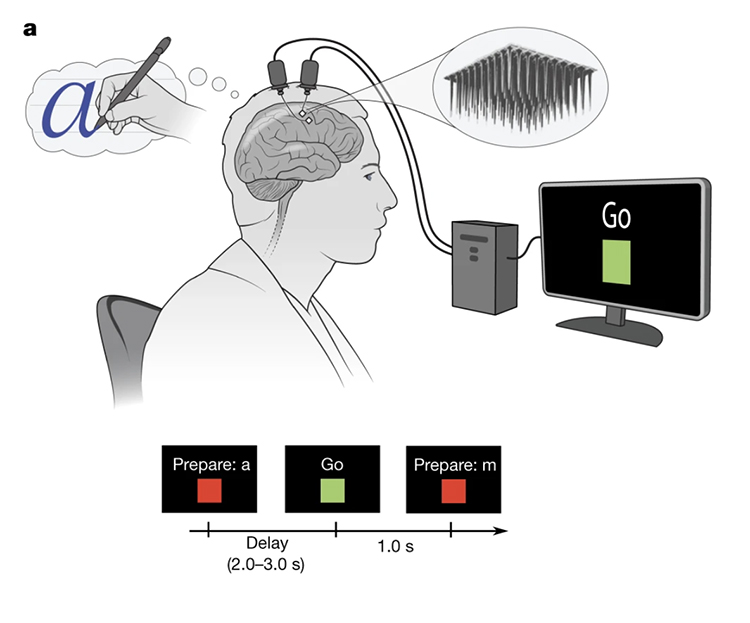 Reading minds may seem like the stuff of science fiction, but cutting-edge technologies which interpret brain activity are real and getting better every year. This technology has a lot of potential to assist those living with paralysis who have lost the ability to speak aloud. In the spring of 2021, a team of Stanford scientists published news of a resounding success in Nature. In an impressive breakthrough, the team developed a brain-computer interface (BCI) which can translate “brain writing” into texts.

Professors Jaimie Henderson and Krishna Shenoy joined with lead author Frank Willett to publish the impressive success of a study conducted with one subject. A 65-year-old man—called T5 for anonymity—was paralyzed in 2007 and lost the use of his limbs. The man had previously participated in a study with the Stanford team where he spelled out words with his thoughts. In the earlier experiment, sensors read brain signals to interpret which keys of a keyboard he wanted to use. The 2021 experiment used a similar setup but a different conceptual approach.

Two brain-computer-interface chips were implanted in T5’s brain in order to monitor the motor cortex, the part of the brain responsible for hand movement. Electrodes in the chip monitor the brain’s activity, reporting the information to a computer. T5 was asked to train the computer using his thoughts. He imagined writing each letter of the alphabet many times over to train the algorithm. Eventually, the artificial intelligence learned his brain signals for each letter and was able to interpret the letters as T5 visualized. These letters turned into text. “We’ve learned that the brain retains its ability to prescribe fine movements a full decade after the body has lost its ability to execute those movements,” Willet noted.

Once the algorithm was trained, the researchers asked T5 to copy sentences on a screen and then to write freeform. In answering the questions, T5 was able to write 90 characters or about 18 words per minute. The team found an error rate of about one mistake per 18 or 19 words. While the mistake ratio was slightly higher in the free-form text, an autocorrect function solved most of the issues. Both rates are dramatically faster than the previous “typing” method in the team’s past study. Ninety characters per minute is comparable to the hand-typing rate of men similarly aged to T5, which is about 115 characters or 23 words per minute.

This BCI is a great stride forward for the technology. However, it is only approved for research uses at present. Shenoy noted, “While handwriting can approach 20 words per minute, we tend to speak around 125 words per minute, and this is another exciting direction that complements handwriting. If combined, these systems could together offer even more options for patients to communicate effectively.” The recent study is part of a larger project known as BrainGate2, a consortium of researchers trying to “turn thought into action” so that everyone can communicate.

A team of researchers at Stanford University have developed a brain-computer interface that can translate imaginary writing into text. 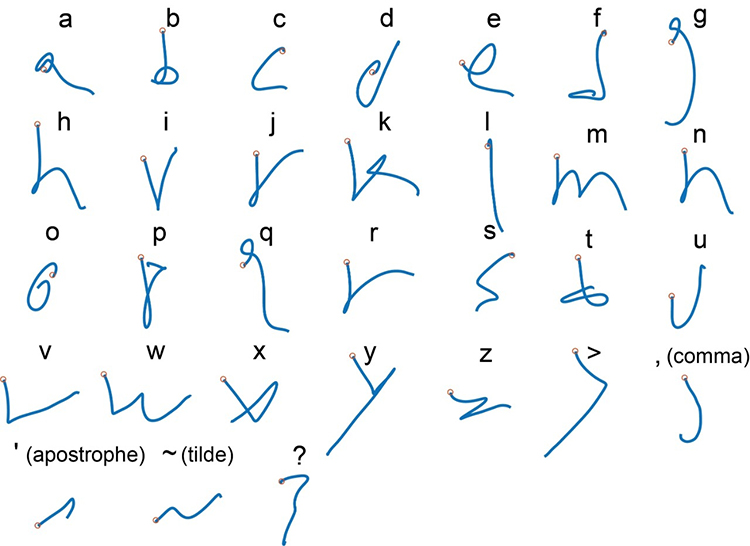