Does cheese really give you vivid dreams?Share using EmailShare on TwitterShare on FacebookShare on Linkedin(Image credit: Bloomberg Creative/Getty Images)

By Jessica Brown17th November 2021Eating a pungent blue or mature camembert before bed is reputed to lead to outlandish dreams, or even nightmares. But can a dairy-laden snack really influence what happens in our sleep?O

Our relationship with cheese is a strange one. It often ranks among people’s favourite foods – there are entire festivals dedicated to cheese, where it is eaten or even rolled down hills. Tasting cheese and pairing it with wines, chutneys and biscuits has been turned into an art form. We also know it is packed with saturated fat and eating too much can be bad for us.

But according to some claims, cheese has an even more surprising darker side – it can affect our brains as we sleep.

Eating cheese late at night, the rumour goes, will give you strange dreams. As far back as 1964, a researcher noted that a patient stopped having nightmares when he dropped his habit of eating one or two ounces of cheddar cheese every evening.

More recently, the now-defunct British Cheese Board, who funded a study in 2005 and concluded that eating blue cheese causes vivid dreams, while cheddar makes people dream about celebrities. The study wasn’t exactly scientifically robust or published in a peer-reviewed journal, but the findings helped to perpetuate the belief that cheese can affect the content of our dreams.

There’s no robust evidence that cheese causes nightmares – or, in fact, much that proves the theory wrong, either. But just the prevalence of this rumour could be enough to make it true, says Tore Nielson, professor of psychiatry at the University of Montreal and director of its dream and nightmare laboratory.

“Just knowing that cheese affects nightmares could induce dreams, because people are suggestible,” he says. 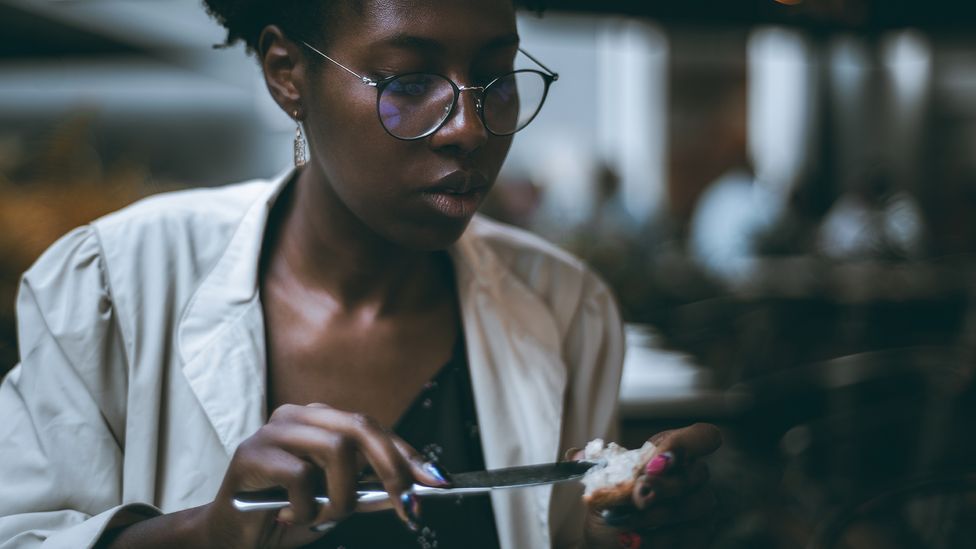 There are a number of theories for how eating cheese late at night could induce vivid and sometimes terrifying dreams (Credit: Getty Images)

Another indirect explanation is cheese’s high lactose content. A study that Nielson conducted in 2015 found that only 17% of people said their dreams seemed to be influenced by what they ate, but he says dairy products were the foods most frequently reported as causing disturbing dreams.

“It’s entirely possible that these effects were due to people having lactose intolerances,” he says. “It’s likely an indirect effect in that lactose produces symptoms like gas, bloating and diarrhoea and influences dreams, as dreams draw on somatic sources like this. And if you have certain kinds of intolerances, you still may be likely to eat those foods sometimes.”

However, there’s no evidence to back up the theory that dairy products influence dreams in the general population. It also contradicts findings that cow’s milk, also high in lactose, has quite the opposite reputation of helping us sleep. A recent review of 14 studies and randomised control trials conducted between 1974 and 2019 suggested that as part of a well-balanced diet milk and dairy could improve sleep quality.

Cheese’s reputation for inducing wild dreams could also be explained, at least in Europe, by the tradition of eating cheese with the last course of an evening meal. Eating any food late at night could affect the quality of our sleep, and perhaps cheese often takes the blame.

“To get a good night’s sleep, you need to drop one degree of body temperature,” says independent sleep expert Neil Stanley. “We usually have no problem with that, but if you eat too much fat or sugar late at night, you’ll need to burn the calories off, which creates heat. During the day, you’ll burn off those calories. But at night, your body doesn’t want to do the work.” 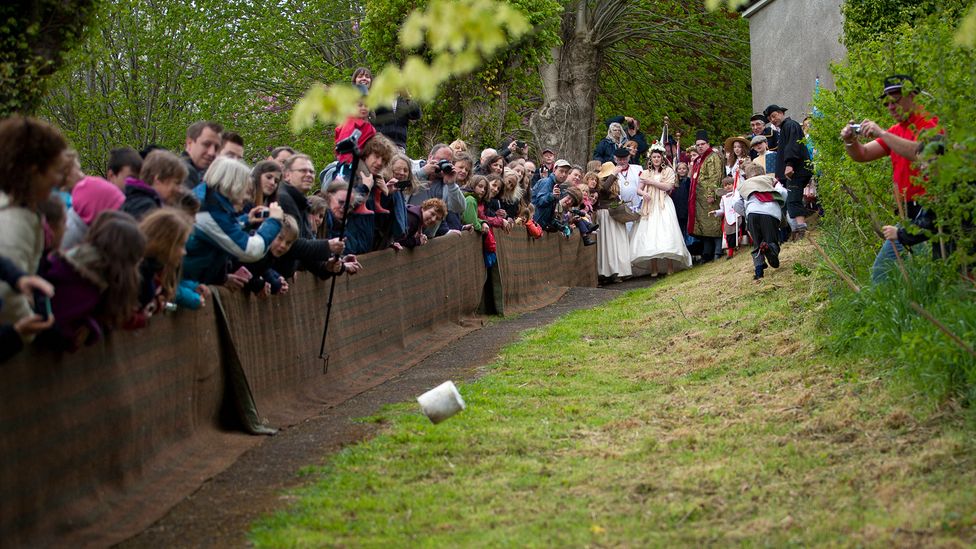 Our relationship with cheese can be quite odd at times, including festivals that roll wheels of it down hills (Credit: Paul Gapper/Alamy)

One review of evidence concludes that the frequency of nightmares are partly linked to sleep disturbance, while evidence also suggests that people who have poorer quality sleep are more affected by their nightmares

“One reason cheese and nightmares come about is that eating later before bed is more likely to disrupt sleep, and cheese can be hard to digest,” says Charlotte Gupta, a research fellow at the Central Queensland University in Australia, who recently published a review on the relationship between our diets and sleep.

But there is some research that suggests that while eating higher-energy evening meals can raise our night-time body temperature, this doesn’t necessarily translate into a poorer night’s sleep. Increased body temperature, however, is known to affect our dreams in other ways though. Fevers have long been associated with vivid dreams and hallucinations. Studies of fever dreams have suggested that they tend to be more bizarre than other dreams.

Whether cheese is capable of inducing enough of a body temperature increase to trigger fever-like dreams, however, is something that needs to be investigated.

But the good news is that some foods may help us get better quality sleep, and perhaps, in turn, make us less prone to remembering nightmares. Studies have found that eating kiwifruit may be linked to a less disturbed night’s sleep, as it’s a good source of serotonin, while a small study found the same effects from cherry juice.

Consuming a diet higher in plant food and fibre, and lower in saturated fat and sugar, seems to be associated with better sleep – Marie-Pierre St-Onge

In one study, Gupta found that those who ate diets most closely resembling the Mediterranean diet, which is high in fruit, vegetables, legumes and nuts, got the best quality shut-eye.

“The mechanism behind this is likely due to the make-up of these foods, many contain melatonin which is sleep-promoting hormone,” she says.

Marie-Pierre St-Onge, associate professor of nutritional medicine at Columbia University Irving Medical Center in New York has found that people who ate a healthy diet which met nutritional recommendations took half as long to fall asleep as they did when eating their own diet, which contained more saturated fat and sugar, and less fibre.

“Consuming a diet higher in plant food and fibre, and lower in saturated fat and sugar, seems to be associated with better sleep,” says St-Onge.

Cheese is low in fibre and high in saturated fat, but no more so than many other foods in our diets, including processed foods.

There isn’t much research looking at the mechanisms behind diet quality and sleep, but it could be down to tryptophan, a nutrient involved in synthesising the hormone melatonin in our bodies, which is released at night and involved in sleep. It’s found in protein-rich foods including cheese, as well as meat – especially turkey – as well as fish, buckwheat, oats and tofu.

Anecdotally, some of the most enduring horror stories could owe their origins to this. Bram Stoker, for example, was apparently inspired to write Dracula after a vivid dream brought on by eating dressed crab while the story of Mr Jekyll and Dr Hyde may have been first occurred to Robert Louis Stevenson in a dream following a copious late night snack.

And there’s no evidence whatsoever looking at the best time of day to eat trytophan-rich foods, says St-Onge. Some research finds that late-night eating is bad for our sleep, possibly because having a full stomach when going to sleep can cause discomfort, researchers say, or that higher blood sugar from eating late at night may affect sleep patterns. 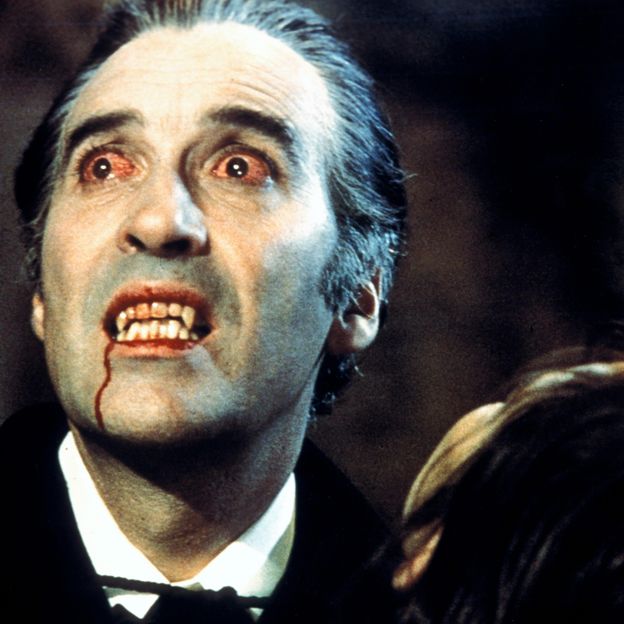 Gothic horror novels such as Dracula may owe their existence to dreams brought on by heavy meals or late night snacking (Credit: Allstar Picture Library/Alamy)

But eating the right foods closer to bedtime might actually be conducive to a good night’s kip.

“Eating closer to bed isn’t something we’d encourage, but if you do, it’s better to eat things that we know are more likely to improve sleep,” says Gupta.

These foods could include tryptophan-rich foods, she says, such as meat, fish and tofu.

Our sleep quality could also be affected by how we eat cheese – and other foods – rather than just the content of our diets. Gupta has found in her research, for example, that not having a normal eating schedule can also lower sleep quality.

Going to bed hungry and thirsty could also cause more vivid dreams, according to Nielson’s research.

“Subjects who reported more often going for long times between eating had more vivid dreams, and we know that fasting is historically associated with incubating vivid dreams,” he says. This, however, is based on spiritual beliefs, rather than scientific evidence.

When held up for scrutiny, the link between nightmares and cheese seems to be as filled with as many holes as a chunk of Emmental

Nielson also found other possible ways our eating behaviours influences our dreams, including being on a diet, binge-eating, and emotional eating – but says the data is limited. Intuitive eaters, whose food consumption was driven by hunger, rather than emotion, seemed to have more positive dreams in Tore’s research, too.

To test this, there needs to be laboratory studies where people are given specific foods before they go to sleep, Nielson says – but this would be tricky research to do.

When held up for scrutiny, the link between nightmares and cheese seems to be as filled with as many holes as a chunk of Emmental. But there is evidence suggesting how and what we eat more generally could be the difference between a good, or terrifying, night’s sleep.

The important take-away is that we can try to improve our sleep by changing our diet, St-Onge says.

“People should be paying attention to what they eat during day and how they feel and sleep, and make changes if they need to.”