By STACY LIBERATORE FOR DAILYMAIL.COM

The prescription treatment, called EaseVRx, comes as a VR headset, controller and a ‘Breathing Amplifier’ that directs the user’s breath toward a microphone on the headset for deep breathing exercises.

The headset utilizes cognitive behavioral therapy and other behavioral methods to help with relaxation, attention-shifting and other therapies to alleviate pain.Pause0:00 / 0:00Full-screenAn error has occurred, please try again laterError code 200

The platform, which as developed by AppliedVR,  includes 56 sessions that range from two to 16 minutes long, which are to be done each day for eight weeks – and the treatment can be conducted while at home. 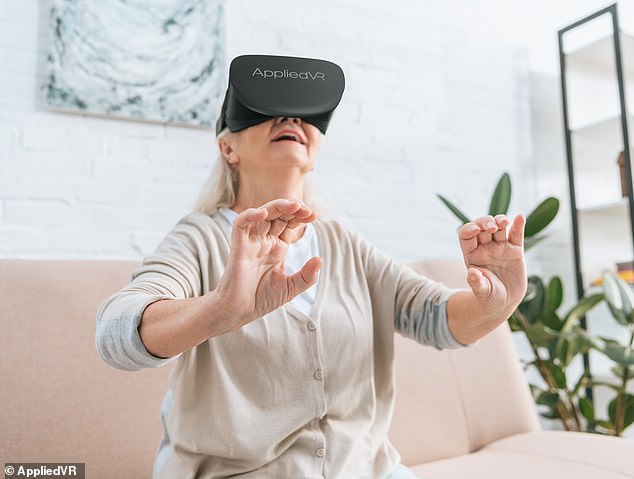 The US Food and Drug Administration authorized a new virtual reality (VR) treatment for chronic lower back pain on Tuesday, which uses breathing exercise to ease suffering. The prescription treatment is called  EaseVRx and was developed by AppliedVR

Christopher M. Loftus, MD, acting director of the Office of Neurological and Physical Medicine Devices in the FDA’s Center for Devices and Radiological Health, said in a statement: ‘Millions of adults in the United States are living with chronic lower back pain that can affect multiple aspects of their daily life.

The FDA approval is based on a trial of 179 patients who have chronic lower back pain.

During the testing, each participant was given either  the EaseVRx immersive 3D program or a control 2D program that did not utilize skills-based cognitive behavioral therapy (CBT) methods of treatment. 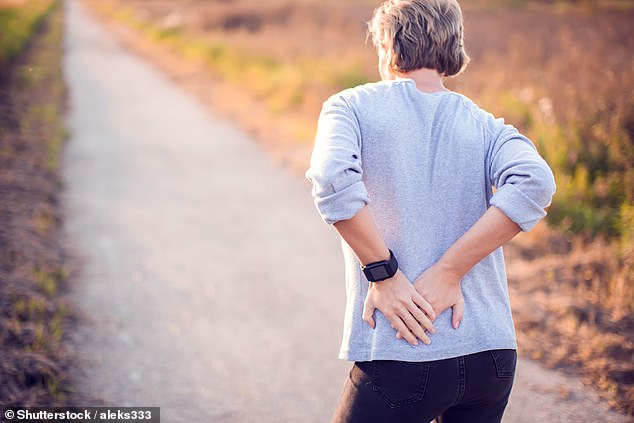 The platform ncludes 56 sessions that range from two to 16 minutes long, which are to be done each day for eight weeks – and the treatment can be conducted while at-home.  46 percent of those using EaseVRx said they found it reduced pain by more than 50 percent

Each participant was asked to use the therapies constantly for eight and a half months and would report back with pain levels.

Being highly active reduces the risk of chronic lower-back pain by 16%.

Regular moderate activity lowers the risk of such discomfort by 14%.

Yet, exercise has no impact on short-term back pain or that which causes hospitalization or disability, the research adds.

Dr Joel Press, physiatrist-in-chief at the Hospital for Special Surgery in New York, said: ‘We were meant to move. We were not meant to be stagnant in any way.

‘Swimming is another low-impact activity that puts less load on your back’.

Dr Press advises back-pain sufferers avoid sports that involve a lot of twisting and turning, such as golf and tennis.

And 46 percent of those using EaseVRx said they found it reduced pain by more than 50 percent compared to 26 percent of control participants.

At the end of the one-month follow-up, the EaseVRx group continued to report a 30 percent reduction in pain, which remained at two and three  months for all measures other than pain intensity.

‘No serious adverse events were observed or reported during the study,’ according to statement from the FDA.

‘Approximately 20.8 percent of participants reported discomfort with the headset and 9.7 percent reported motion sickness and nausea.’

In 2019, researches at the Imperial College London found watching calming virtual reality videos including Arctic scenes helps to relieve ‘intense burning pain’ and could treat chronic pain in the future.

Using a virtual reality headset, researchers played full 360 degree views to people in pain and found it helped to reduce how much they were suffering.

It was found that using the technology helped to not only reduced people’s perceived pain levels but also their sensitivity to painful stimuli.

This adds to the ‘growing evidence’ for the potential of virtual reality technology to help patients with chronic pain, according to the team from Imperial College London.