November 23, 2021 — A team of researchers from Yale University has found that autism affects the microstructure of white matter in the brains of adolescents and young adults over time as indicated on MRI scans, according to research to be presented at the upcoming RSNA 2021 meeting.

Using MRI, study lead author and doctoral candidate Clara Weber and colleagues found that these changes were most dramatic in areas that help the two hemispheres of the brain communicate. Tracking them could help clinicians better recognize autism and monitor response to treatment in kids with autism, Weber said in a statement released by the RSNA.

“One in 68 children in the U.S. is affected by autism spectrum disorder, but high variety in symptom manifestation and severity make it hard to recognize the condition early and monitor treatment response,” she said. “We aim to find neuroimaging biomarkers that can potentially facilitate diagnosis and therapy planning.”

Weber and colleagues assessed diffusion tensor imaging (DTI) MRI brain scans from 583 patients. DTI measures brain connectivity by tracking how water moves along white-matter pathways; the investigators created fractional anisotropy, mean diffusivity, and radial diffusivity maps for each age group, all of which are ways of tracing the movement of water in the brain.

The patient cohort was divided into the following categories: 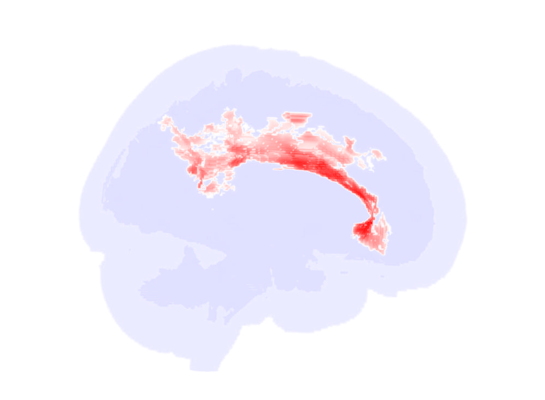 Significant alterations in the brain’s white matter in adolescents with autism spectrum disorder. Image and caption courtesy of the RSNA.

“In adolescents, we saw a significant influence of autism,” Weber said. “In adults, the effect was even more pronounced. Our results support the idea of impaired brain connectivity in autism, especially in tracts that connect both hemispheres.”

The study results could translate to earlier diagnosis of autism spectrum disorder, and they may help to define biomarkers that could help monitor treatment response, the investigators noted.

“We need to find more objective biomarkers for the disorder that can be applied in clinical practice,” Weber concluded.