Thursday, November 25th 2021, 6:16 pm – The rover’s brief ‘stopover’ at Murray Buttes, over five years ago, may have provided NASA scientists with what they need to protect astronauts from radiation on Mars.https://www.theweathernetwork.com/videoplayer/1942203455001/B1CSR9sVf/6283440554001?autoplay=true

When the first humans land on Mars, one of the many dangers they will contend with is the constant bombardment from space radiation. Now, data from NASA’s Curiosity rover has revealed new options for finding shelter from this threat, which could make it easier and less expensive to explore the Red Planet.

Earth is ideal for protecting life from dangerous space radiation. The planet’s geomagnetic field and thick atmosphere combine to provide us with a very effective shield against these hazards. Mars, on the other hand, currently lacks either of those protective measures. Its geomagnetic field collapsed long ago, and the surface has less than 1 percent of Earth’s atmospheric pressure. Thus, there is a constant bombardment from galactic cosmic rays, and the surface is exposed to intense solar radiation, as well as radiation from occasional solar storms that sweep by the planet. 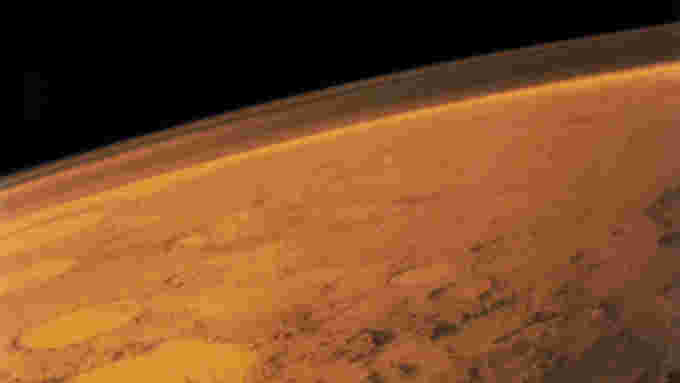 This edge-on view of Mars’s thin atmosphere was captured by NASA’s Viking 1 spacecraft in 1976. Credit: NASA

With our human ambitions for exploration, there’s no doubt that we will visit Mars someday in the future — perhaps even within the next decade or two. Researchers have already used data from the Curiosity rover to show that at least the level of exposure on the surface of Mars isn’t lethal. Still, without any significant leaps in technology, habitats would need to be heavily shielded to keep radiation exposure to a minimum. That shielding will increase the cost and the mass of the habitat, limiting other aspects of the mission.

According to a new study, though, there may be a solution to this problem.

For roughly two weeks in the middle of September 2016, Curiosity parked at the base of a cliff known as Murray Buttes, near the bottom of Mount Sharp. During that time, the rover’s Radiation Assessment Detector, or RAD, was dutifully collecting data to be sent back to Earth. RAD detects galactic cosmic rays and high-energy particles energized by coronal mass ejections (aka solar storms) from the Sun. 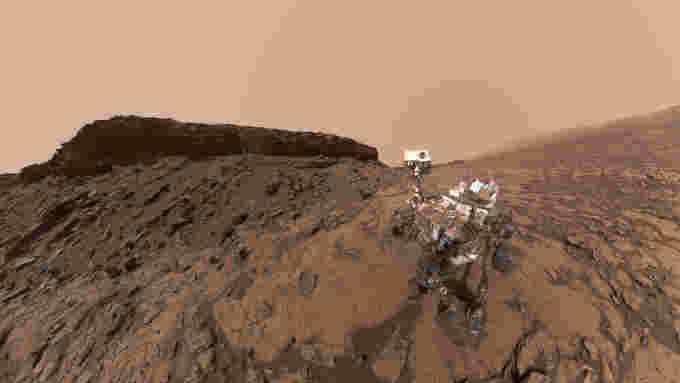 Curiosity captured this panoramic selfie at Murray Buttes on Sept. 17-18, 2016. The complete image is stitched together from multiple smaller pictures taken with the Mars Hand Lens Imager, or MAHLI, located on the end of the rover’s arm. Credit: NASA/JPL-Caltech/MSSS

According to NASA, while the rover was parked next to this cliff, RAD saw a 4 per cent drop in overall radiation compared to when it was out in the open. For ‘neutral particle radiation’, which includes high energy neutrons that are one of the most dangerous forms of radiation to humans, the detector noted a 7.5 per cent decrease.

While radiation levels on Mars’ surface are not constant — they naturally increase and decrease over time — the researchers noted that these changes were too significant to be random. Instead, they must have been due to Curiosity’s proximity to the cliff. The Martian sediment layers in Murray Butte provided a physical barrier to the radiation coming from part of the Martian sky! An image from NASA’s Curiosity rover shows a close-up view of the sediment layers of Murray Buttes. Credit: NASA/JPL-Caltech/MSSS

“We’ve been waiting a long time for the right conditions to get these results, which are critical to ensure the accuracy of our computer models,” study lead Bent Ehresmann of the Southwest Research Institute, said in the NASA JPL press release. “At Murray Buttes, we finally had these conditions and the data to analyze this effect. We’re now looking for other locations where RAD can repeat these kinds of measurements.”

Based on this, future Mars explorers may not need to bring along heavy shielding for their habitats. Instead, they could use lighter habitats and seek out naturally-occurring shielding to keep them safe.

Underground lava tubes are one option that has been discussed in the past. From this study, though, they could establish their base camps next to suitable cliffs, crater walls, or rock overhangs that provide adequate protection. For more extended stays, astronauts could even dig down into the Martian surface to build subterranean habitats. The Radiation Assessment Detector (RAD) is located on the deck of the Curiosity rover. Credit: NASA/JPL-Caltech/MSSS

In addition to providing a perspective on the radiation experienced on the surface of Mars, Curiosity’s RAD instrument is also supplying scientists with a unique perspective on space weather.

Space weather is the activity of the Sun — solar flares, the solar wind, and coronal mass ejections — and the impact of those phenomena on our technologies, both in space and on the ground.

Here on Earth, we have an extensive network of stations, ships, and buoys that keeps us updated on changes in our weather conditions. Additionally, satellites in orbit keep a constant watch from above. Combined, this allows us to track weather systems that could significantly impact our lives. It also gives us the ability to make accurate predictions about the weather in the days ahead.

In contrast, space weather forecasters have far fewer resources. The instruments required to detect and monitor space weather are far more complex than what we use for weather on Earth. In most cases, they need to be launched into space onboard expensive satellites. A handful of spacecraft currently keep a direct ‘eye’ on the Sun for solar flares and coronal mass ejections (CMEs). Two examples are NASA’s Solar Dynamics Observatory (SDO) and the NASA/ESA Solar and Heliospheric Observatory (SOHO). A few others, such as NASA’s Advanced Composition Explorer (ACE) and NOAA’s Deep Space Climate Observatory (DSCOVR), are positioned farther from Earth to monitor the solar wind and approaching CMEs. This graphic presents the spacecraft and satellites that are part of our global ‘heliophysics fleet’, monitoring solar activity and conditions around Earth. Credit: NASA

With its unique position on Mars, Curiosity’s RAD instrument is also helpful for tracking space weather.

“Cosmic rays, solar radiation, solar storms – they are all components of space weather, and RAD is effectively a space weather outpost on the surface of Mars,” Don Hassler, principal investigator of the RAD instrument of the Southwest Research Institute, said in a NASA JPL press release.

When Curiosity arrived on Mars on August 6, 2012, the Sun was at the height of the previous solar cycle. At that time, activity was at its maximum, and the number of flares and CMEs gradually decreased in the years following. However, as of December 2019, we entered solar cycle 25, and activity is once again increasing.

“This is an exciting time for us, because one of the important objectives of RAD is to characterize the extremes of space weather,” Ehresmann said. “Events such as solar flares and storms are one type of space weather that happens most frequently during increased solar activity — the time we are approaching now.”

While we are familiar with the effects of solar flares and solar storms on Earth, we know far less about how they impact Mars. Future observations with RAD may provide new insights into the dangers astronauts might face if a powerful solar flare or solar storm occurs while they explore the Red Planet.