Irving, Texas-based 7-Eleven said Wednesday said the pilot in Mountain View, Calif., will mark the first autonomous commercial delivery in the state. Customers in the service area will be able to place orders through the 7NOW delivery app and have their products delivered by bot-powered vehicles.

The test initially will use Nuro’s self-driving Toyota Prius car, which carries a human operator for supervision, and later include Nuro’s R2 unmanned vehicle, the companies said. Vehicles from Nuro, a Mountain View-based provider of robotics and artificial intelligence technology, are custom-built to transport products and goods without any occupants.

“Our first foray into autonomous delivery was in 2016, when 7-Eleven became the first retailer in the U.S. to make a drone delivery to a customer’s house. Since then, we haven’t stopped looking for ways to redefine convenience for our customers inside and outside the four walls of our stores,” Raghu Mahadevan, chief digital officer at 7-Eleven, said in a statement. “Fast forward to 2021, and we are pushing the boundaries of innovation even further to provide customers with the first commercial autonomous delivery service in California.” 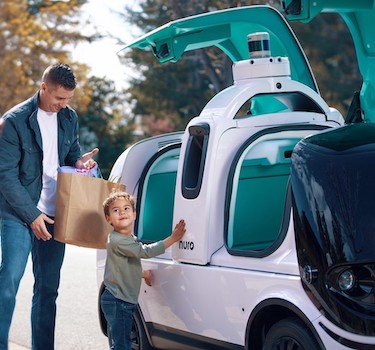 Later on in the pilot, 7-Eleven plans to use Nuro’s R2 unmanned vehicle to make deliveries. (Photo courtesy of Nuro)

To order through the autonomous delivery service, customers download the 7NOW delivery app (available at Google Play, the Apple App Store and 7NOW.com) and begin shopping by adding items to their virtual cart. At checkout, they choose autonomous delivery, and the app will send updates as the order is processed. 7-Eleven said orders arrive in about 30 minutes. Customers retrieve their order by going outside and taking their items from the back of the vehicle.

Products available for autonomous delivery include pizza, chips, beverages and household items, among other offerings. Age-restricted items such as alcohol, tobacco products and lottery tickets aren’t available through the service, which operates 8 a.m. to 9 p.m. and carries no additional charge for customers in Mountain View.

Nuro became the first autonomous vehicle company to receive a deployment permit from California in December, enabling the launch of the pilot with 7-Eleven, the retailer said.

“Residents in the state of California, a major hub of innovation, have never been able to experience the commercial delivery of goods by an autonomous vehicle. Nuro is teaming up with 7-Eleven to change that,” according to Jiajun Zhu, co-founder and CEO of Nuro. “We’ve always wanted to bring Nuro’s autonomous delivery to our local community and to our neighbors. We couldn’t be more excited to do this with an iconic neighborhood store like 7-Eleven in our hometown, Mountain View.”

Overall, 7-Eleven operates, franchises and/or licenses more than 77,000 stores in 19 countries and regions, including nearly 16,000 stores in North America.

Grocery retailers that have piloted Nuro autonomous vehicles for delivery include Walmart and The Kroger Co. Other supermarket chains that have tested autonomous delivery with other technology providers include The Save Mart Cos., H-E-B, Amazon and Stop & Shop. Earlier this year, Albertsons Cos. announced a pilot of a remote-controlled grocery delivery cart in Northern California through its Safeway chain.