How Digital Health Firms Are Innovating Far Beyond Your Wrist 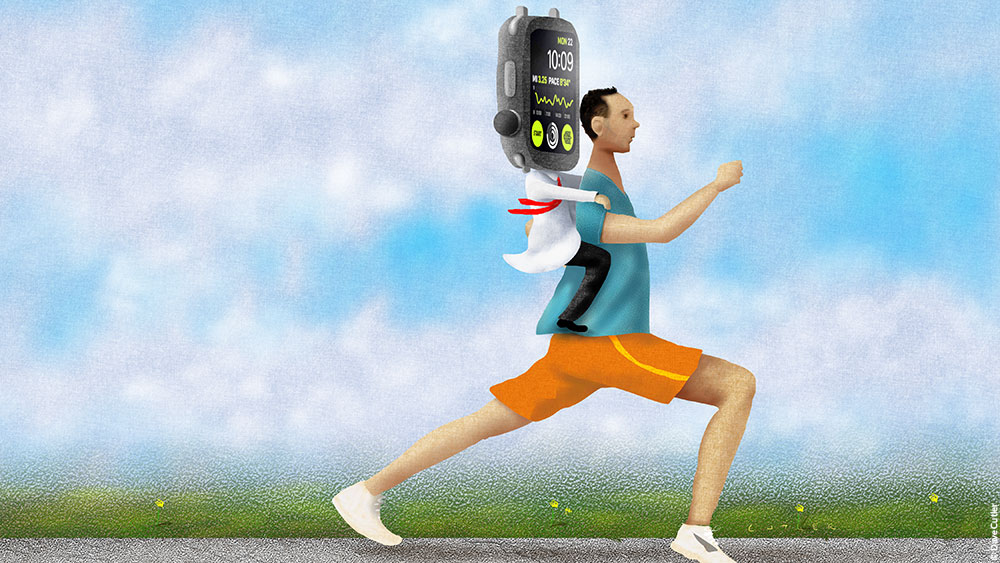 Wearable tech gadgets can observe the human body 24/7 as though it were an industrial machine. (© Dave Cutler)

Fitness trackers such as the Apple Watch have gotten people comfortable with wearing sensors to monitor their body’s functions. Now a number of wearable tech gadgets — on full display at the CES 2022 tech trade show this month — are blazing a path to a digital health future where patients and their doctors can observe the human body 24/7 as though it were an industrial machine.https://imasdk.googleapis.com/js/core/bridge3.494.0_en.html#goog_1362828607Volume 0%01:5001:50

Apple (AAPL) has led the digital health tracking trend with its Apple Watch smartwatches. But a number of other tech companies are chasing the digital health market with their own wearable devices designed to pick up the body’s signals — literally from head to toe. Wearable tech device sales are expected to ring up more than half a billion units for 2021 and jump roughly 50% in just a few years.

Big firms such as Alphabet’s (GOOGL) Fitbit unit, Garmin (GRMN) and Samsung, as well as relative unknowns like Zepp Health (ZEPP) are taking part. Even at-home exercise equipment maker Peloton Interactive (PTON) reportedly is working on a digital heart-rate armband as part of a push into the wearables market.

And wearable health technology was a big part of CES 2022, as more than 100 health companies signed up to exhibit.

“These wearable sensors are wonderful technology and becoming very cost-effective,” said Karen Panetta, a fellow with the Institute of Electrical and Electronics Engineers, better known as IEEE. “I definitely see them playing a huge role in the future.”

The public is showing an increased appetite for wearable tech that monitors their vital signs, says Panetta.

“We’ve evolved from just counting how many steps somebody takes to checking your heart rhythms and dehydration levels,” she said.

At the head of the trail are Apple’s wrist-worn smartwatches. The devices feature sensors that can monitor a user’s heart rate and provide notifications of high or low heart rate.

They also can detect irregular heart rhythm, which can be a sign of atrial fibrillation, or AFib. News articles have cited numerous cases of people with undiagnosed AFib crediting the Apple Watch with saving their lives.

The newest models, the Apple Watch Series 7, have an electrical heart sensor and electrocardiogram app. The Series 7 devices also have a blood oxygen sensor and app. Prices start at $399.

These advanced sensors build on a base of fitness tracking apps that measure and analyze movement to determine activity levels.

What’s Ahead For Digital Health Gadgets?

So, what’s next in wearable devices for tracking digital health? Sensors in the works could monitor blood glucose levels and blood pressure, and even look for signs of Covid or other infections.

She added, “But we need to think beyond the wrist and innovate by exploring how to monitor multiple biomarkers with one easy-to-use passive sensor such as a skin patch — something small and unobtrusive.”

Abbott Laboratories (ABT) promoted devices like its FreeStyle Libre system, a small wearable sensor and smartphone app for diabetes patients to continuously monitor their glucose levels.

In a keynote speech at CES, Abbott Chief Executive Robert Ford announced that his company is developing a new category of consumer “biowearables” called Lingo. The sensor technology will track key signals in the body such as glucose, ketones and lactate.

Other exhibitors at CES 2022 showed off wrist devices, armbands, rings and skin patches that can collect personal health data.

Wrist-Worn Devices Are Just The Beginning

While wrist-worn devices are the most common digital health gadgets in use, others are cropping up. Some wireless earbuds have heart rate and body temperature sensors.

But Owlet ran into an issue that all makers of digital health devices face. That is, at what point do these gadgets become medical devices requiring government approval?

On Oct. 1, Owlet received a warning letter from the U.S. Food and Drug Administration regarding the Owlet Smart Sock. In its letter, the FDA asserted that Owlet’s Smart Sock is a medical device in the U.S.

The agency also maintains that such a device requires FDA premarket clearance and approval. The FDA made the assessment based on Owlet’s marketing and product functionality.

Owlet halted sales of its Smart Sock in the U.S. while it seeks marketing approval from the FDA. It continues to sell the device in international markets. On Jan. 5, Owlet launched another wearable called the Dream Sock, which monitors a baby’s sleep patterns, heart rate and movement. It sells for $299.

Apple sidestepped getting FDA approval for the blood oxygen app in its newest Apple Watch. The company stated it is not intended for medical uses. It added that the app is “only designed for general fitness and wellness purposes.”

But Apple likely will add more health-tracking sensors to the Apple Watch as the device matures.

Media reports indicate that Apple plans to add a body temperature sensor to the Apple Watch Series 8 in 2022. After that, it is developing a blood-sugar sensor, which would help diabetics monitor their glucose levels. A sensor for tracking a wearer’s hydration also is reportedly in the works.

Where wearable tech devices come up short today is on diagnostics, Panetta says. They might be able to flag potential health problems, but consumers need a physician to confirm the issue. And too many false alarms would lower the effectiveness of the devices.

The analysis software tied to the health sensors will improve over time as artificial intelligence sifts through data from the devices of millions of users, Panetta says.

Wearable tech could be a gold mine for health research, says Robert Hirten, a gastroenterologist and wearables expert at the Icahn School of Medicine at Mount Sinai.

Ensuring data privacy will be a key issue for consumers and researchers, Hirten says. Wearable tech also can provide doctors with patient data between office visits, he adds.