A meteorite nearly killed this B.C. woman in her sleep. Scientists say it could be 470 million years old.

The cosmic rock hurtled through space and time and landed in Ruth Hamilton’s bed, just beside her head. It could be worth thousands. 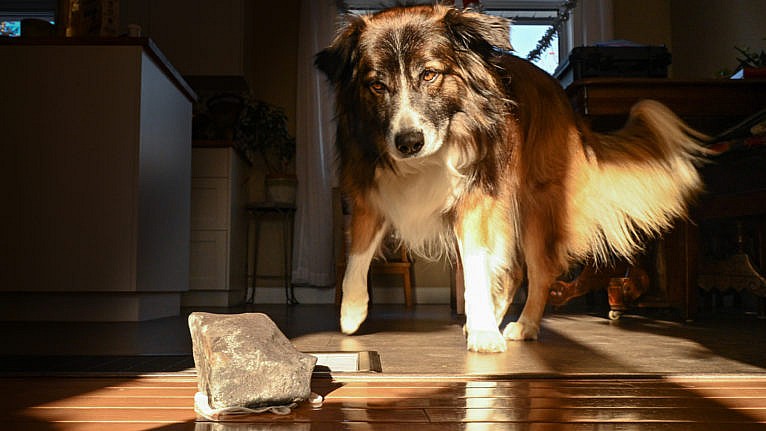 Ruth Hamilton’s dog, Toby, assesses the space rock after it has been returned by the Western University team (Photograph by Amy Barrett)

At 11:35 p.m. on Oct. 3, Ruth Hamilton was rattled awake by her dog’s urgent barking. The 66-year-old had been sound asleep in her home in the mountain town of Golden, B.C., about 260 km west of Calgary. Then: an exploding sound, as Hamilton’s bedroom ceiling broke open and drywall littered her floral bedsheets. There was a gaping football-sized hole in her roof.

With one hand shuffling bed pillows and a 911 operator on the phone in the other, she saw a strange object sitting inches from where her head had been only moments before. It was a charcoal-grey rock about the size of a grapefruit, cool to her touch and weighing a little over a kilogram.

The RCMP officer who responded to Hamilton’s call that night suspected it came from a blast at a highway construction site not far from her home in the Rockies. Only after the officer called the site did the alien origin of the rock become clear. Crews told him they hadn’t done any blasting, but had seen an explosion in the sky and heard a big bang. The Mountie returned minutes later and told Hamilton: “I think you have a meteorite in your bed.”

READ: Space exploration is about more than sending billionaires into orbit

Hamilton, though unscathed, was shocked. The rock could have killed or seriously injured her had she been sleeping a few inches over on her queen-size bed. After a sleepless night punctuated by tea and time watching The Crown, she reported the incident to Western University’s physics and astronomy department in London, Ont., and lent them the rock for analysis. Philip McCausland, director of Western’s paleomagnetic and petrophysical laboratory, and Peter Brown, a physics and astronomy professor, confirmed the rock was indeed a meteorite. “As soon as I opened that email and saw the photos,” says McCausland, “there was no question.”

Space rocks collide with this planet about 41 times a month. But the chance of one striking your house is around one in 100 billion. The blast heard by the construction workers—and Hamilton’s frantic dog Toby—was the rock shattering as it plunged into Earth’s atmosphere, moments before the shard hurtled into her bedroom at 100 to 200 metres per second. As meteors enter the upper atmosphere, the air in front of them compresses and heats up, causing most to incinerate. To enchanted Earth-bound onlookers, they appear as fireballs.

McCausland identified the rock as an ordinary chondrite. Although this type of meteorite makes up 70 to 80 per cent of those that strike the Earth, they fascinate researchers like him: “It came from way back in time,” he says, “when the solar system was just starting.”

Chondrites are chock full of chondrules, which look like glass marbles but are actually condensed, melted dust that floated around the sun 4.5 billion years ago. McCausland’s unproven suspicion: this meteorite came from a collision in the asteroid belt between Jupiter and Mars about 470 million years ago. Meteorites are “intrinsically useful,” he says. “They give us a window on the history of the solar system that we don’t get from the Earth.”

Using video captured by terrestrial observers—including, in this case, footage from a home-security camera in Calgary— researchers can reconstruct the meteor’s orbit prior to its impact. From its path, they discern where in the asteroid belt it came from. Brown and McCausland are working on a paper to present these findings.

MORE: Whitehorse’s historic Martha Black Mayday tree is dying–but its seedlings may help it live on

Weeks later, the hole in Hamilton’s bedroom ceiling was repaired—“Insurance is covering it,” she says—and the meteorite was back from its scientific mission to Western. Hamilton plans to sell it. Under Canada’s Cultural Property Export and Import Act, meteorites belong to the owner of the property on which they land, and cosmic rocks like hers fetch anywhere from five cents to $1,000 per gram. “It’s [worth] what somebody is willing to pay for a stone that has a really, really good backstory,” says Michael Mazur, a Western Ph.D. student in astronomy. Mazur travelled to B.C. to retrieve Hamilton’s meteorite, and personally delivered it back to her in December.

Although Hamilton lived through a near-death experience that may turn out to be lucrative, she is reflective. “Appreciate life and appreciate what you have,” she says. “I was snug in my bed, sound asleep. Had it moved over six inches, I would not be here.”