The Biggest Galaxy Ever Found Has Just Been Discovered, And It Will Break Your Brain

Astronomers have just found an absolute monster of a galaxy.

The discovery highlights our poor understanding of these colossi, and what drives their incredible growth. But it could provide a pathway to better understanding, not just of giant radio galaxies, but the intergalactic medium that drifts in the yawning voids of space.

Giant radio galaxies are yet another mystery in a Universe full of mysteries. They consist of a host galaxy (that’s the cluster of stars orbiting a galactic nucleus containing a supermassive black hole), as well as colossal jets and lobes that erupt forth from the galactic center.

These jets and lobes, interacting with the intergalactic medium, act as a synchrotron to accelerate electrons that produce radio emission.

We are pretty sure we know what produces the jets: an active supermassive black hole at the galactic center. We refer to a black hole as ‘active’ when it’s guzzling down (or ‘accreting’) material from a giant disk of material around it.

Not all the material in the accretion disk swirling into an active black hole inevitably ends up beyond the event horizon. A small fraction of it somehow gets funneled from the inner region of the accretion disk to the poles, where it is blasted into space in the form of jets of ionized plasma, at speeds a significant percentage of the speed of light.

These jets can travel enormous distances before spreading out into giant radio-emitting lobes. 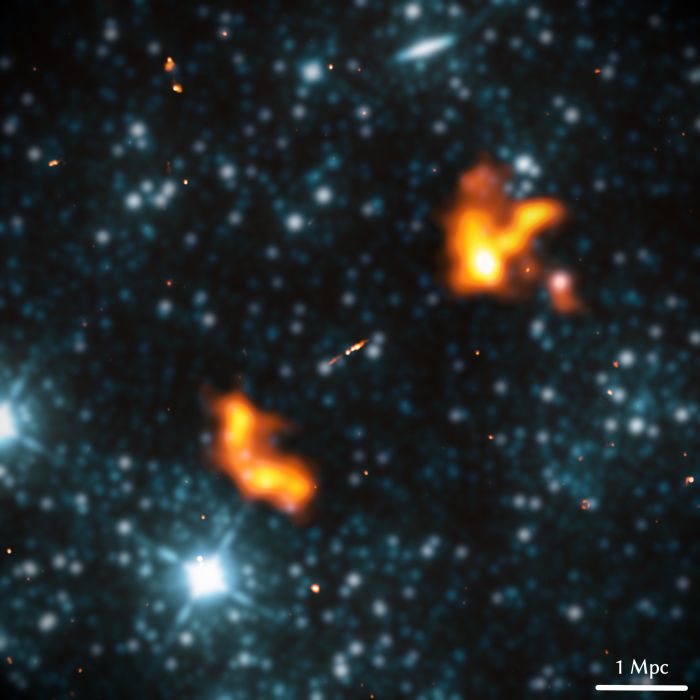 This process is pretty normal. Even the Milky Way has radio lobes. What we don’t really have a good handle on is why, in some galaxies, they grow to absolutely gargantuan sizes, on megaparsec scales. These are called giant radio galaxies, and the most extreme examples could be key to understanding what drives their growth.

“If there exist host galaxy characteristics that are an important cause for giant radio galaxy growth, then the hosts of the largest giant radio galaxies are likely to possess them,” the researchers, led by astronomer Martijn Oei of Leiden Observatory in the Netherlands, explain in their preprint paper, which has been accepted for publication in Astronomy & Astrophysics.

The team went looking for these outliers in data collected by the LOw Frequency ARray (LOFAR) in Europe, an interferometric network consisting of around 20,000 radio antennas, distributed throughout 52 locations across Europe.

They reprocessed the data through a new pipeline, removing compact radio sources that might interfere with detections of diffuse radio lobes, and correcting for optical distortion.

The resulting images, they say, represents the most sensitive search ever conducted for radio galaxy lobes. Then, they used the best pattern recognition tool available for locating their target: their own eyes.

This is how they found Alcyoneus, spewing forth from a galaxy a few billion light-years away.

“We have discovered what is in projection the largest known structure made by a single galaxy – a giant radio galaxy with a projected proper length [of] 4.99 ± 0.04 megaparsecs. The true proper length is at least … 5.04 ± 0.05 megaparsecs,” they write.

Once they had measured the lobes, the researchers used the Sloan Digital Sky Survey to try to understand the host galaxy.

Both of these parameters are actually at the low end for giant radio galaxies, which could provide some clues as to what drives the growth of radio lobes.

“Beyond geometry, Alcyoneus and its host are suspiciously ordinary: the total low-frequency luminosity density, stellar mass and supermassive black hole mass are all lower than, though similar to, those of the medial giant radio galaxies,” the researchers write.

“Thus, very massive galaxies or central black holes are not necessary to grow large giants, and, if the observed state is representative of the source over its lifetime, neither is high radio power.”

It could be that Alcyoneus is sitting in a region of space that is lower density than average, which could enable its expansion – or that interaction with the cosmic web plays a role in the object’s growth.

Whatever is behind it, though, the researchers believe that Alcyoneus is still growing even bigger, far away in the cosmic dark.

The research has been accepted for publication in Astronomy & Astrophysics, and is available on arXiv.