The smart speaker industry is on the upswing. That’s according to a survey of over 1,038 adults conducted by Voicebot.ai and Voicify in the first week of January 2018. They found that the number of smart speaker owners — i.e., owners of AI-imbued devices like Amazon’s Echo, Google Home, and Apple’s HomePod — reached 66.4 million in the U.S. and 133 million globally in 2019. That represents year-over-year growth of 39.8 percent and comes as new smart speaker sales boost ownership to 26.2 percent of U.S. adults, up from 20 percent in 2017.

“The continued upward trend in adoption cannot be overlooked by brands any longer,” Voicify CEO Jeff McMahon said. “The significance of effort and investment by Amazon and Google is supported by user adoption and purchase.  Smart speakers are quickly becoming a dominant tool in everyday life.” 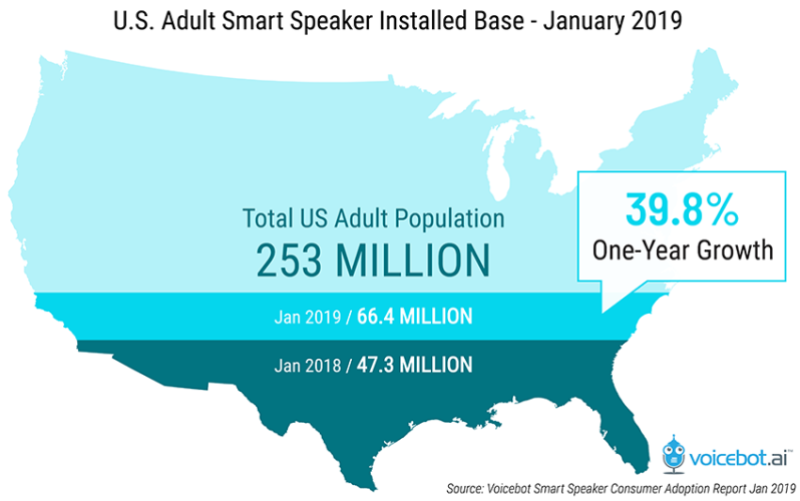 Amazon and Google’s combined share of the market dipped slightly from 90 percent at year-end 2017 to 85 percent a year later, but their lineups still dominate competition like the HomePod and Sonos’ eponymous Sonos One, which has just 15 percent of the market. The HomePod recently notched up 2.7 percent, while the Sonos One reached 2.2 percent.

“HomePod was an important driver of the rise of non-Amazon and non-Google smart speakers,” Voicebot.ai editor Bret Kinsella wrote. “The bigger news is that Amazon maintained a substantial market share advantage over Google and is still capturing new Echo users as the market expands.”

Privacy fears weren’t a strong deterrent for most buyers. About 21.5 percent of survey respondents said they were “not concerned” about having a smart speaker in their home, while only 20.8 percent said they were moderately concerned. Interestingly, ownership appeared somewhat dependent on Gmail and Amazon Prime usage. According to the survey, Prime subscribers are 50 percent more likely to own a smart speaker and much more likely to have an Echo-branded device — Echo products command a 70 percent market share among that group. As for Gmail users, about 31 percent are likely to own a Google home device.

Smart speakers weren’t the only “smart device” category experiencing growth. Voicebot and Voicify report that smart displays — that is, smart speakers with built-in screens — reached 13.2 percent adoption among smart speaker owners, an enormous uptick of 558 percent from 1.3 million to 8.7 million. Amazon leads this segment, too — Alexa-powered speakers had a 67 percent share of the market, nearly double Google Assistant devices’ 33 percent.

Despite the really impressive growth, it’s a bit too early to tell whether smart speakers will have staying power. A separate survey published earlier this year — this one conducted by NPR and Edison Research — found that 69 percent of respondents said they weren’t interested in buying another smart speaker within the next six months, with only 30 percent saying they were “somewhat likely” or “very likely” to buy another device.

Still, analysts at Markets and Markets forecast that the market could be worth $11.79 billion by 2023. Here’s hoping smart speakers are better at answering questions by then.