Big, swappable bed-mounted unit that would probably require a forklift All Things EV interviewed Rivian CEO RJ Scaringe in January. When asked about range anxiety, Scaringe said, “We have some interesting auxiliary batteries that we’re looking at … like a digital jerry can.” A patent application published by the U.S. Patent and Trademark Office lays out one of those “interesting” options. The filing shows a large-ish battery that slots into the front of the bed of the R1T pickup, like a large toolbox or a secondary fuel tank.

The application is titled “Electric Vehicle with Modular Removable Auxiliary Battery with Integrated Cooling,” and describes a system considerably more complex than a jerry can. The filing doesn’t reveal the battery capacity, so we don’t know how much extra range the battery would provide. Since the battery is plug-and-play, it would come inside a module with cooling circuits, a heat exchanger, and dedicated electronics.

There are two module shapes presented in the filing. The one that looks like a toolbox “is configured to have a height and width approximately the same as the height and width of the cargo area, about 15-20 inches deep by about 48-60 inches wide… and a depth in the lengthwise direction of about 12-24 inches.” That describes a shape of five cubic feet at its smallest, 16.7 cubic feet at its largest. On the large side, if the module took up 24 inches, that would leave 31 inches of usable bed length. 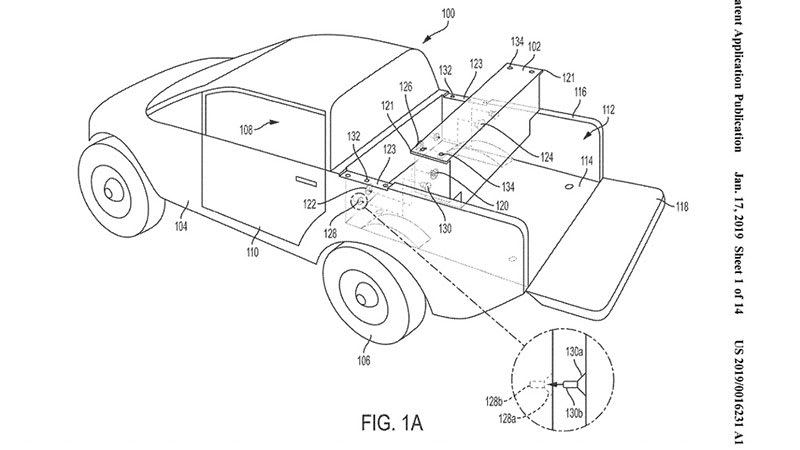 The second module lies flat in the bed, being eight to 12 inches high, with “a width and depth that [is] about the same as the usable width and depth of the cargo area, e.g., about 48-60 inches by about 60-80 inches.” Using the largest dimensions, that renders a module of 33.3 cubic feet, and would leave a larger but shallower area of bed space to work with. No matter the shape, the module isn’t light, needing to be lowered into the bed with either a forklift or winches and cables and then bolted or latched down, according to the text.

The unit would connect to ports at the front of the bed. The pickup would note the connection and change various settings, such as braking performance and suspension damping, to accommodate. The auxiliary battery would hook into the same cooling circuit used by the main battery in the floor.

Rivian plans to offer three onboard battery packs of 105 kWh, 135 kWh and 180 kWh, the latter looking like it will set the bar as the largest pack available in a consumer vehicle. The company predicts around 410 miles of range with the 180 kWh pack. With stated plans to go after the adventure crowd, if the camelback battery can push range beyond 500 miles, that would make a significant impression on overlanding types — depending on cost, of course. The patent application does mention military considerations, a far more likely use-case once the word “forklift” gets involved.

Zero Motorcycles provides a similar, albeit much smaller concept. Called the Power Tank, it replaces the integrated tank bag with a 3.6-kWh battery.

Rivian filed for the patent last year. We might see nothing come of it, but after being published on January 17, the U.S. PTO just marked it as “Pending.”