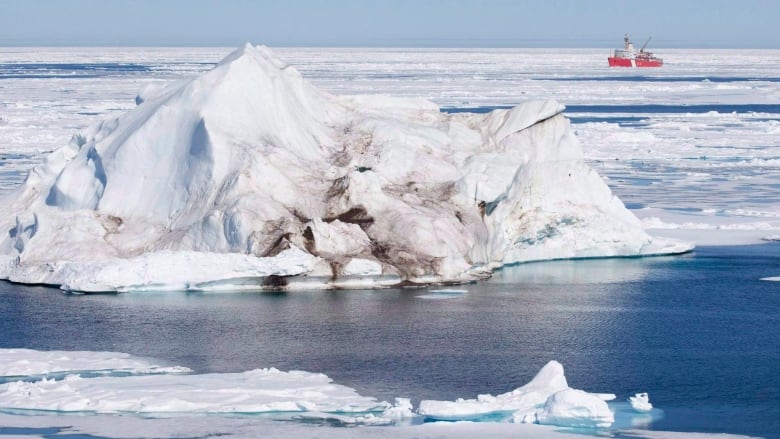 Climate scientists have long been concerned about the rapid warming of the Arctic and the consequences it causes across the globe. (Jonathan Hayward/Canadian Press)

1817 comments
By now, scientists have made it as clear as they possibly can that climate change is real and greenhouse gas emissions are to blame.
But what is perhaps less well known is the natural role the Arctic plays in both accelerating climate change and spreading its often disastrous consequences around the world.
Recent events such as the prolonged rains of hurricanes Harvey and Florence and the persistent drought across the U.S. Midwest are linked to — though not necessarily directly caused by — climate change, climatologists warn.
And while these events may seem disconnected from Canada’s North, the truth is, it’s the Arctic that is helping to fuel them.

As more and more carbon dioxide is pumped into the atmosphere, it warms the planet. And nowhere are the effects more dramatic than in the Arctic.

“In Canada’s Arctic, in the period of more or less the last 40 years, we’ve lost about 40 per cent of ice coverage,” said Blair Feltmate, head of the Intact Centre on Climate Adaptation at the University of Waterloo.

When you have disproportionate warming in the Arctic region going forward, the manifestation of that phenomenon at a global scale is going to be felt effectively all over the planet.– Blair Feltmate , University of Waterloo

“The loss of ice in the Arctic has actually caused a positive feedback system whereby climate change is driving climate change in and of itself, on top of the burning of fossil fuels,” Feltmate said.

According to the U.S. National Snow and Ice Data Center, winter ice cover in the Arctic has decreased by roughly three per cent per decade since 1979. In 2012, there was a record low for minimum ice cover in September, 3.41 million square kilometres — 44 per cent less than the 1981–2010 average. 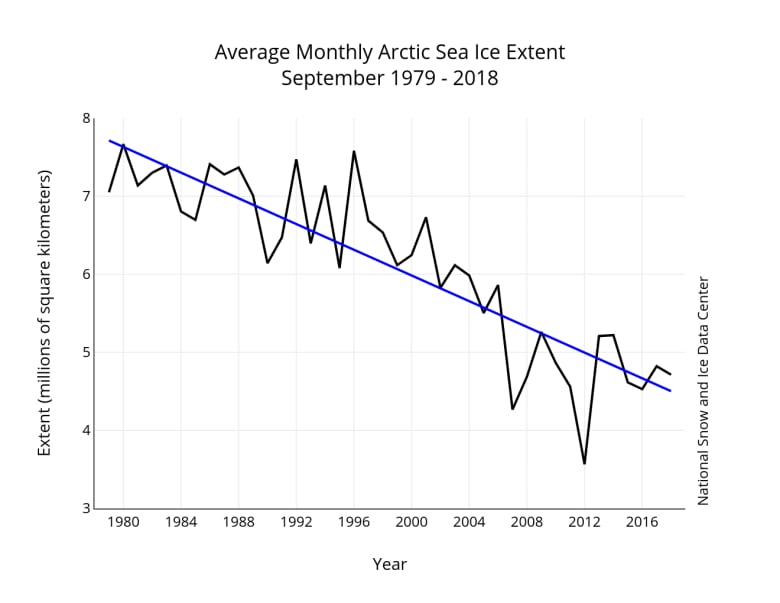 The monthly September sea ice cover for 1979 to 2018 shows a decline of 12.8 per cent per decade. (National Snow and Ice Data Center)

The warmer temperatures in the region also produce thinner ice, which contributes to the feedback loop in its own way.

The thinner ice breaks up much easier and is more mobile, said Jennifer Francis, a research professor at Rutgers University in New Jersey who studies climate change in the Arctic.

The recent report from the Intergovernmental Panel on Climate Change found warming in the Arctic is happening two to three times faster than anywhere else on Earth. And the consequences of this warming will be felt across the globe — because what happens in the Arctic doesn’t stay in the Arctic.

The warming Arctic has its most significant impact on the jet stream, a column of air in the upper atmosphere that helps drive weather systems.

Scientists have noticed that the jet stream, which used to move in a relatively straight line from west to east with few dips, is now more unstable, with much bigger dips. 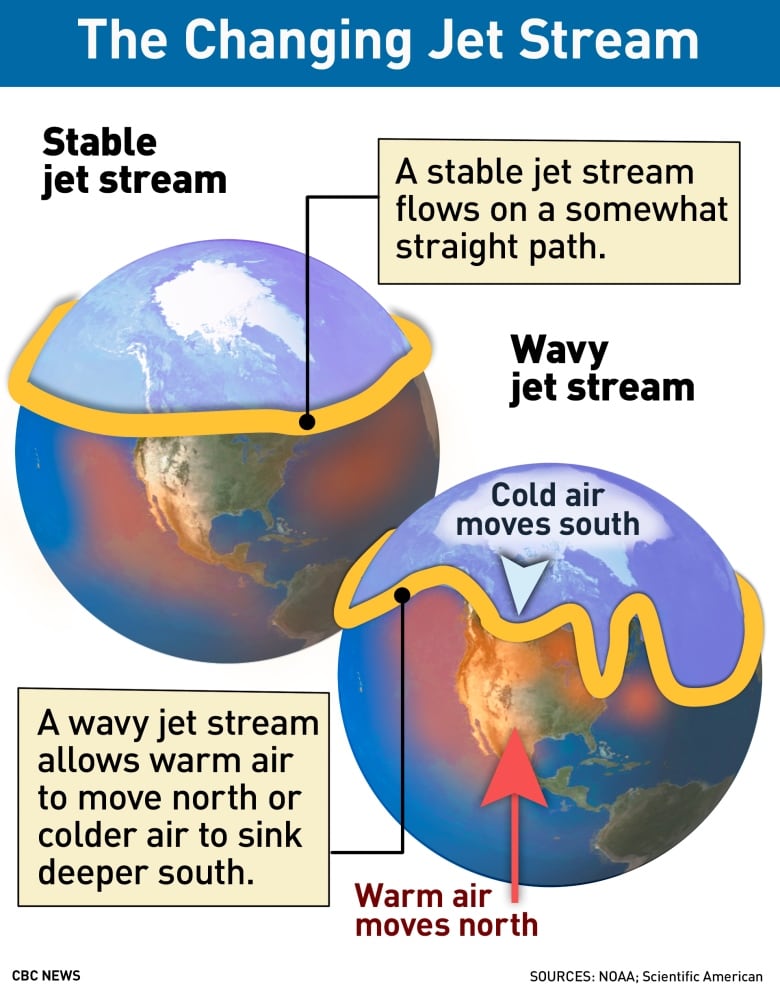 This moves Arctic air farther south — think of the “polar vortex” — and allows warmer air from the south to move farther north.

Just this week, for example, parts of Alberta were battling abnormally low temperatures and snow, while southern Ontario was basking in record summer-like temperatures.

And that includes the weather across the entire Northern Hemisphere. 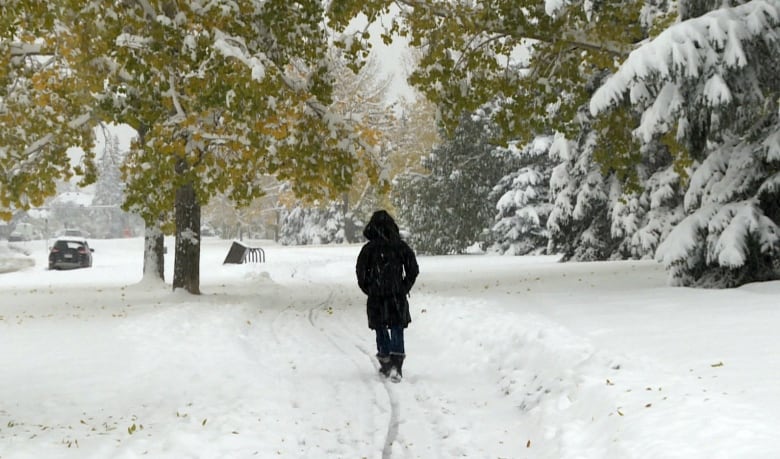 Take, for example, Hurricane Florence that almost came to a standstill over the Carolinas last month. Because the jet stream was so far north, the hurricane was cut off and prevented from moving northeastward on a more typical path. It was similar to what occurred with Hurricane Harvey in 2017 over Texas.

“We’re talking about an integrated system,” Feltmate said. “When you have disproportionate warming in the Arctic region going forward, the manifestation of that phenomenon at a global scale is going to be felt effectively all over the planet.”

“There’s not a whole lot we can do to reverse it. But it doesn’t mean we shouldn’t do everything we can possibly do to slow it down,” Francis said.

“The underlying disease is emissions of greenhouse gases.”