The dark side of mindfulness: It’s supposed to be calming. But there’s growing evidence the fashionable therapy can be harmful

Since the age of 13, crippling anxiety has derailed mealtimes for long-term eating disorder sufferer, Maddy Le Bourdon. Now 27, her condition is something she has had medical treatment for, on and off, for more than a decade.

But 18 months ago, she put her faith in the promise of a relatively new type of psychotherapy: mindfulness. Following her GP’s advice, she downloaded a smartphone app called Headspace, for a ten-minute, daily audio session.

A soothing voice instructed her to focus on her breathing and let noisy thoughts float by without judgment, as if they were passing traffic. But for Maddy, far from leaving her calmer and less worried, it evoked a disturbing reaction.

‘I began obsessing over my bloated stomach and the food I’d eaten. For the first time ever, I felt the need to purge,’ she recalls. Maddy Le Bourdon, 27, had trouble doing mindfulness, finding that it makes her anxious thoughts much worse

Maddy later tried mindful walking, a mindfulness method in which participants focus on the environment and bodily sensations as they walk. ‘I was suddenly overcome with the urge to run,’ she recalls. ‘I ran for miles to silence the nervous thoughts swimming around my head. My anxiety was heightened for weeks.’

Mindfulness – a type of psychotherapy based on meditation – is booming in popularity.

Reconnecting our bodies and minds, the therapy said to increase understanding of how our thoughts influence our emotions and behaviour, and promotes self-esteem.

Dozens of scientific studies have found it to alleviate symptoms of depression and anxiety, and millions say the practise has transformed their lives for the better.

One recent meta-analysis of six trials found individuals who received a mindfulness-based therapy were 43 per cent less likely to experience depressive symptoms than those receiving other therapies.

And you don’t need an appointment with a psychotherapist to do it. There are DIY books, apps, and even spa retreats lasting weeks on end in which guests swap their busy lives for intensive, daily mindfulness activities including meditation and yoga. There is no doubt that mindfulness is a welcome addition to the psychotherapists’ toolbox. Yet, amid the enthusiasm, a growing number of psychological experts are concerned that, far from being a panacea, mindfulness could actually be putting the mental health of thousands of people at risk.

RISK OF BEING ALONE WITH YOUR THOUGHTS

During a typical mindfulness session, individuals sit in silence with their eyes closed for between ten and 60 minutes, focusing on one thing such as the sensations of breathing in and out.

When the mind wanders, patients are advised to bring their attention back to the thing they are focusing on. Sessions can be carried out alone, or with the help of a therapist or ‘guide’.

Studies have shown that mindfulness can improve self-esteem, reduce anxiety and help to manage depression. But leading psychologists warn there could be a dark side, and the therapy can in fact exacerbate or even trigger serious psychiatric illness in some vulnerable individuals.

Dr Miguel Farias, a psychologist and researcher from Coventry University, says: ‘For about five per cent of people, these practices have a paradoxical effect. It makes them much more anxious, induces panic attacks and even psychosis.’ 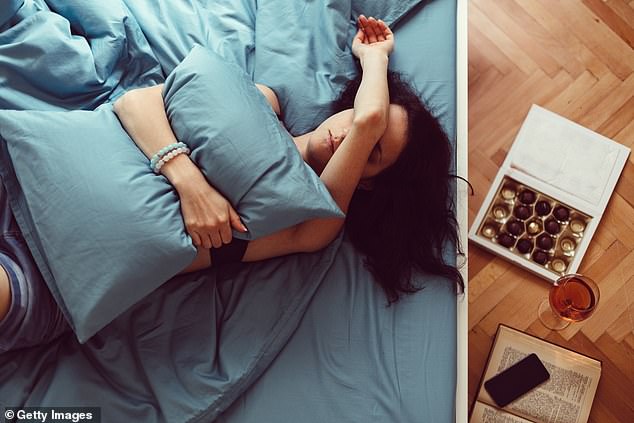 According to Dr Farias, more than 20 studies – involving thousands of participants – over the past two decades have demonstrated the potentially damaging effect of mindfulness meditation.

‘Many people have childhood traumas or underlying mental health problems that may be undiagnosed,’ notes Dr Farias. ‘Being forced to sit alone with their thoughts brings out dark memories which they can’t cope with.’ He believes the adverse effects have been overshadowed by a celebrity-fuelled ‘mindfulness hype’.

A recent study celebrated mindfulness for reducing war veterans’ symptoms of post-traumatic stress disorder – such as flashbacks, intrusive thoughts and night terrors – by 20 per cent.

But two months after the intervention, soldiers’ symptoms returned and were just as debilitating.

A 2014 study by researchers at the University of Pittsburgh found a daily, 25-minute mindfulness exercise – similar to that of a popular phone app – actually increased blood levels of the stress hormone cortisol in anxious office workers.

Yet, in 2015, an all-party parliamentary group advocated the use of mindfulness in British educational, healthcare and criminal justice institutions. And since last year, the Government has funded mindfulness schemes in 200 British primary schools in an effort to combat the crisis in children’s mental health.

Dr Mark Salter, a consultant psychiatrist in East London, has also witnessed the fallout of mindfulness. He says: ‘Most psychiatric illness, whether diagnosed or undiagnosed, is rooted in trauma. People draw on a wide range of distracting coping mechanisms to deal with these day-to-day,’ he explains.

‘Mindfulness involves stopping all these mechanisms at once which can become distressing, often inducing severe panic and anxiety.’

For this reason, the UK’s leading venue, The Oxford Mindfulness Centre, exclude those with suicidal thoughts and psychiatric disorders from treatment.

Dr Farias believes that, by definition, those accessing mindfulness are more mentally fragile than the general population.

‘By engaging in this therapy, they are seeking a solution to uncomfortable feelings,’ he notes.

There is specific, grave concern about the growing popularity of mindfulness retreats: week-long, intensive meditation and ‘switching off’ from the wider world.

One study found that half of individuals attending a mindfulness retreat felt more depressed, anxious and disorientated than before. One experienced delusions, eventually leading to a suicide attempt.

Scientists believe the reason mindfulness has this unwanted effect could lie with the brain’s ‘alarm centre’, the amygdala.

Brain-imaging studies by University of Michigan researchers show mindfulness reduces connectivity between the amygdala and the subgenual anterior cingulate cortex – crucial for emotional processing.This can mean less worry for some, but anxiety and panic for others.

Dr Farias warns: ‘Without a trained psychological professional, it can be seriously harmful. Mindfulness is not for everyone.’

Maddy has since found relief in another type of psychotherapy.

‘I’ve been learning why I need to feed my body properly,’ she says. ‘Trying to stop thinking was never going to help me. Only when I tackled how I saw my body could I fix my relationship with food.’

between IBS and IBD?