Parkinson’s patient, 69, becomes the first in the world to receive transplant of brain cells made from his own skin in breakthrough experimental treatment that has given him the ability to swim and tie his shoes again

Doctors have transplanted brain cells to treat Parkinson’s in a historic first for the medical world, Stat News reported.

Decades after the first failed attempt to implant dopamine cells – neurotransmitters that start dying off in the brains of Parkinson’s sufferers – a California man became the first to undergo the procedure successfully – and as a direct result of his own finances.

Harvard University stem cell biologist Dr Kwang-Soo Kim gained brief notoriety in 2009 when he published a paper about turning patients’ own skin cells into stem cells, then turning those into brain cells that might treat the devastating neurological condition.

But in 2013, he’d lost the vast majority of his funding, and prospects for his future research were looking grim. Then he received an email from a stranger, offering to pay for his work to continue.

George Lopez, the mysterious benefactor, has Parkinson’s and in the absence of a cure or even treatments that do more than dampen the symptoms, he was beginning to deteriorate.

A few email exchanges, $2 million dollars, an FDA Hail-Mary, one surgical tool invention and four years later, Lopez – a former internist-turned-inventor who goes by ‘Doc’ – became the first person to successfully have millions of dopamine cells made from his skin injected into his brain in 2017.

After that first treatment, he was briefly euphoric. After his second, he was swimming again, an activity he’d given up for the past year for fear his tremors would escalate, and he’d drown.

Dr Kim and his team will release a case study on Doc this week and, although the 69-year-old’s laps are a far cry from clinical proof that Parkinson’s can be stopped, the treatment he underwent could be the first glimmer of a breakthrough against the disease. 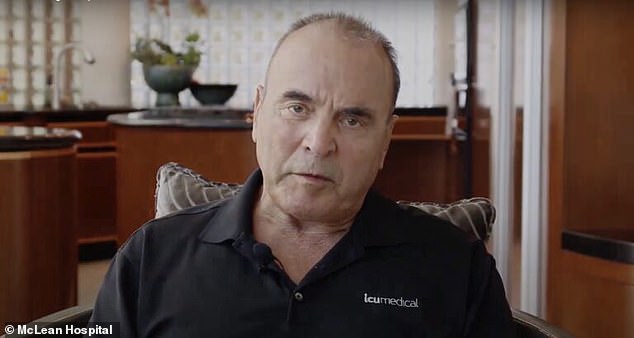 George ‘Doc’ Lopez gave Dr Kim and his team $2 million to work on a Parkinson’s treatment – and ultimately became the first patient to receive a transplant of lab-made dopamine neurons. Eighteen months after the procedure, he’s regained some motor function

Dr Kwang-Soo Kim reverted skin cells take from George Lopez into stem cells (left), and then reprogrammed them to be dopamine neurons (right), which were injected into Lopez’s brain to treat his Parkinson’s disease in a world-first procedure

More than a decade ago, Doc’s hand trembled.

It was unlike any shaking he’d experienced before, and he confessed to his wife, who was dying of breast cancer that he thought he had Parkinson’s.

She was unconvinced, but Doc was diagnosed shortly thereafter, and lost his wife in 2006.

Doc was staring down the same fate: an early death from the incurable disease that was causing his neurological system to deteriorate.

With no clear notion of what causes it, doctors are mostly at a loss for how to stop the progression of Parkinson’s, much less cure it.

Parkinson’s disease affects one in 500 people, including about one million Americans.

It causes muscle stiffness, slowness of movement, tremors, sleep disturbance, chronic fatigue, an impaired quality of life and can lead to severe disability.

It is a progressive neurological condition that destroys cells in the part of the brain that controls movement.

Sufferers are known to have diminished supplies of dopamine because nerve cells that make it have died.

There is currently no cure and no way of stopping the progression of the disease, but hundreds of scientific trials are underway to try and change that.

The disease claimed the life of boxing legend Muhammad Ali in 2016.

Doc started cycling through these drugs, but as the dopamine levels in the brain decline, the drugs – even at higher doses – increasingly pale next to the disease’s effects.

He started to tap back into his experience as a doctor, and asked his neurologist what avenues of research seemed most promising for potential cures.

When his physician replied that stem cells were the best hope, Doc signed up to attend a summit where scientists would present their research on the topic.

There, he saw Dr Kim speak.

Doc was unable to catch him at the conference, but was determined to track the biologist down.

Dr Kim had explained how his lab was taking skin cells from patients, and reverting them back to their embryonic state so that they were malleable enough to be manipulated into whatever kinds of cells they needed.

The kind the Dr Kim’s lab needed were dopamine neurons found in the midbrain.

These are the neurons that seem to peter out in Parkinson’s patients, sending their dopamine levels into an eventual free fall.

Dr Kim’s major accomplishment, at least in his own mind, was developing a way to put cells into this rewind mode using bacteria as the vehicle for ‘reprogramming genes’ into the skin cells, instead of viruses, as previous researchers had done.

Viruses, some scientists worried, could get off target, delivering the gene-changing cells to the wrong cells, potentially turning them cancerous.

But his breakthrough didn’t really go anywhere. As it happened the stem cells Dr Kim was making were well-suited to transform into dopamine neurons.

‘It was a total dead end,’ Dr Kim told Stat.

‘But I couldn’t make it efficient enough. It was a disaster.’

That wasn’t enough to ensure his funding continued. With budget cuts to the NIH, the agency cut Dr Kim’s funding too.

It was about that time that Doc contacted him, effectively asking what amount to write on a blank check.

With the resulting funds, Dr Kim honed his stem cells so that he could produce tens of millions of them – the enormous quantity necessary to replace the gaping shortfall of them seen in Parkinson’s patients – in the lab, and remove the ones that didn’t fully mature into dopamine neurons, which, left to their own devices, might trigger tumor growth. 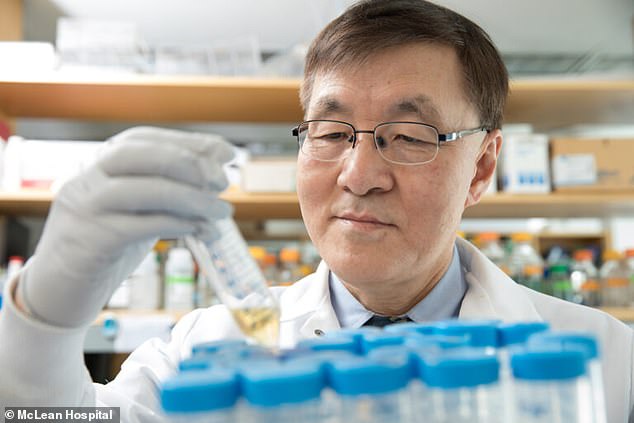 Dr Kim developed a safer method of converting skin cells to stem cells and then to brain cells, allowing them to be injected into the brain to treat Parkinson’s

Still, the unlikely duo would need to find someone to get these new dopamine neurons to their intended target: a highly skilled neurosurgeon.

And that device had to fit in the imaging machines that would guide the surgeons in the process.

But Dr Kim had applied for ‘compassionate use’ of the experimental treatment – and they said yes. 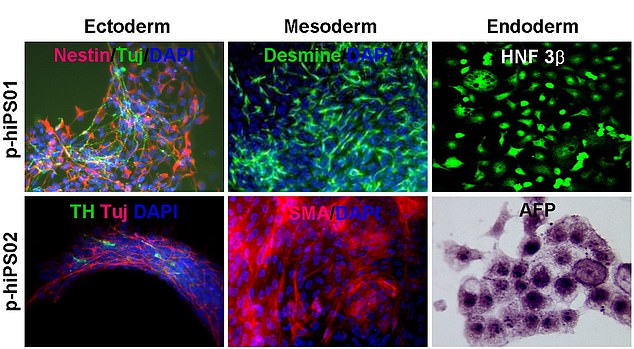 Dr Kim published a paper showing how he could use bacteria to more safely turn skin cells into stem cells (pictured) and ultimately into other cells, like neurons – but the research was a ‘dead end’ and funding was cut, until Lopez found him

Suddenly, Doc was back in the spotlight. The scientists needed a patient to try their untested treatment on, and Doc was ready, willing and fit for surgery.

Because the stem cells still had the potential to go rogue and cause tumors, the FDA said that the neurosurgeons could only inject them into one side of Doc’s brain to begin with.

Immediately after the brain cells were transplanted, Doc was practically high.

He felt as though he had regained motor control and strength.

His doctors cautioned that brain surgery itself can trigger dopamine surges, and that the immediate effects of the stem cells might have little to do with their longer term effects.

They were right about the first part, at least. Doc’s jubilant mobility lasted two days.

But he wasn’t getting worse, and regular checks of his brain showed no signs that the stem cells were triggering tumors or other major side effects.

In 2018, he underwent a second surgery, injecting millions more stem cells into the other side of Doc’s brain.

In the intervening months, rumors started to spread that Japanese scientists had been the first to do such a brain cell transplant, but Dr Kim and the entire team kept quiet, waiting to be sure that Doc’s surgeries had in fact been a success.

Brain scans have continued to show that the neurons seem to be producing dopamine, and Doc is still tumor free.

In fact, he’s much better than that. He’s started buying shoes with laces, which he can tie himself. He can swim again.

‘Doc has demonstrated a number of areas of functional improvement that are hard to argue with,’ said Dr Todd Herrington, one of Doc’s neurologists at Harvard, in a 2018 interview with Stat.

Currently, the tour-de-force behind Doc’s incredible state today has no way to scale their treatment up to a clinical trial – but they hope that that might change with their paper revealing the apparent success of their proof-of-concept experiment.