By JOE PINKSTONE FOR MAILONLINE

Facial recognition technology can determine a person’s personality by analysing an emotionless selfie, a study claims.

Researchers built an artificial neural network that assessed 128 different factors of a person’s face, such as the width of the mouth and the height of the lips or eyes.

It used the data from these readings to categorise a person based on five personality traits: conscientiousness, neuroticism, extraversion, agreeableness, and openness.

When compared to questionnaires filled in by the volunteers, the AI was accurate 58 per cent of the time.

Researchers say pure chance would get this right 50 per cent of the time and humans are less consistent than the facial recognition method.

Scroll down for video 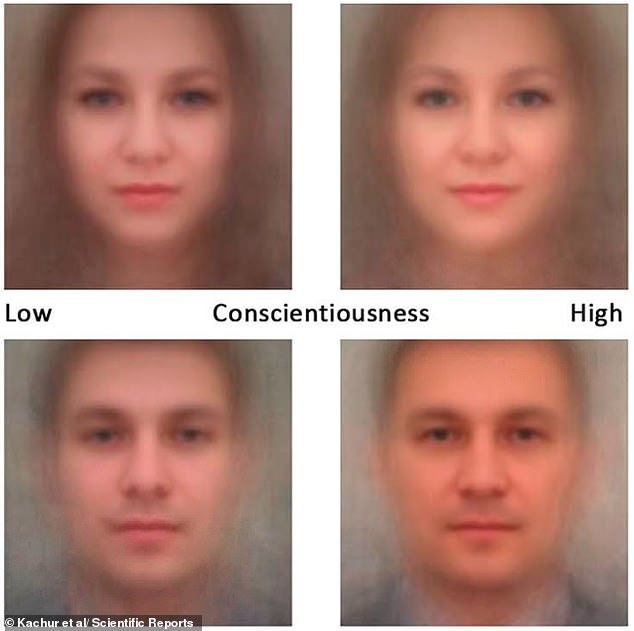 The researchers trained the AI system to determine personality based on selfies. A person was classified as having one of the following traits: conscientiousness, neuroticism, extraversion, agreeableness, and openness. The team then created composite images by averaging the uploaded images with the highest and the lowest test scores on each trait. Pictured, the averaged look at most and least conscientious 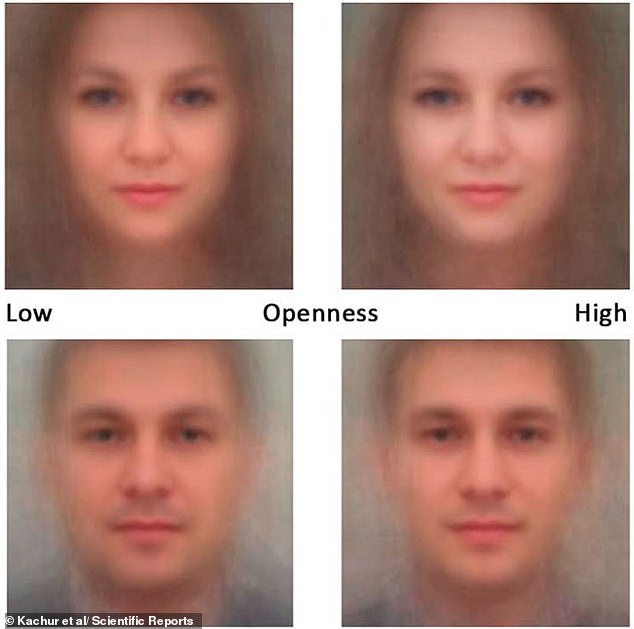 Pictured, a composite image showing the differences between the average low and high levels of openness. Previous research has found open minded people command higher earnings and ‘agreeable’ types are popular and have lots of friends

The system was found to be more accurate on women than on men and was best at recognising conscientiousness.

A total of 12,000 volunteers uploaded 31,000 selfies in total an and these were split into two groups.

One was used to train the AI system and the other group was sued to test the network.

Researches from two Moscow universities, HSE University (Higher School of Economics) and Open University for the Humanities and Economics, say the artificial neural network outperforms an average human who is asked to rate a person’s personality in person but without knowing anything else about the person.

The system could help bosses identify the most suitable job applicant, the researchers claim.

It may also improve selection of the ‘best matches’ for dating websites, customer service or online tutoring.

Co-author Dr Evgeny Osin said faces contain a significant amount of information about the person inside. 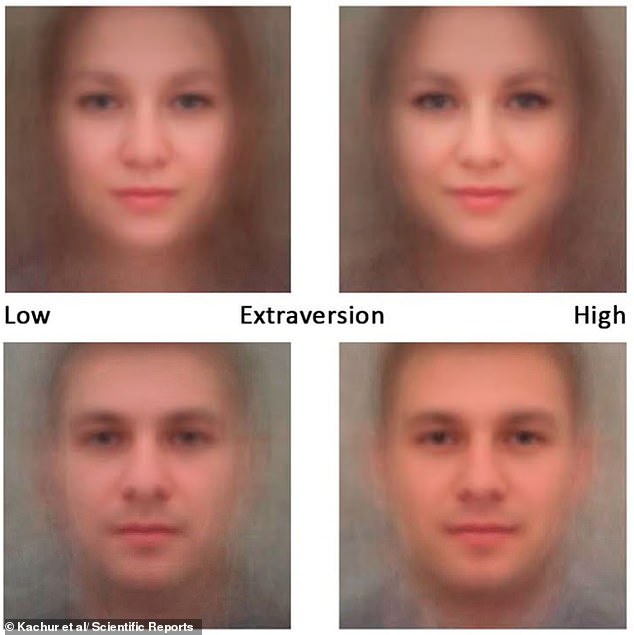 Pictured, the computer generated view of the most and least extroverted face based on the thousands of selfie it analysed. Research shows extroverts are happier – and more likely to have tattoos, for instance. Neurotics experience more mental health problems. 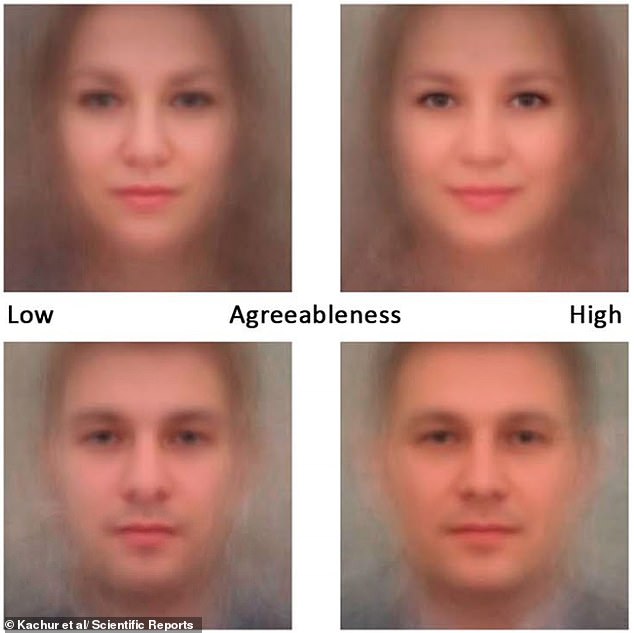 Pictures left, male and female faces which look least agreeable. On the right re images showing the computer-generated faces of people with the highest level of agreeableness 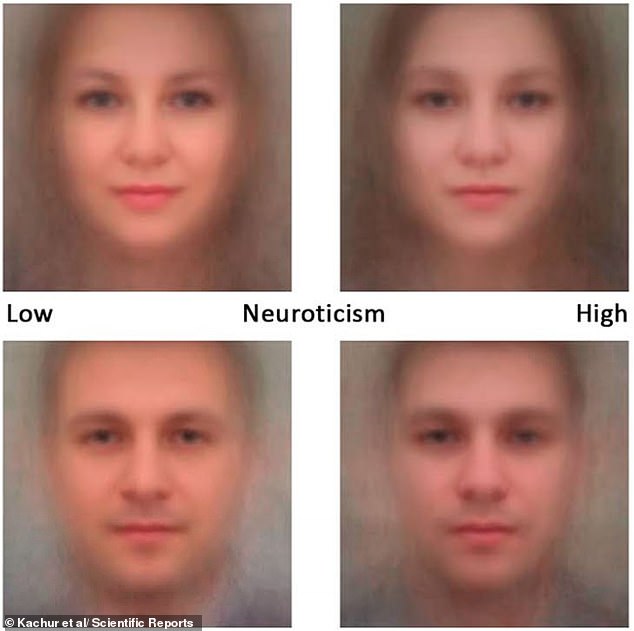 He said: ‘The aid of artificial intelligence in making partner choices could help individuals to achieve more satisfying interaction outcomes.

It’s the strongest evidence to date that ‘physiognomy’ — assessing a person’s character from their face — actually works.

Personality reveals the kind of lives we are likely to lead. A conscientious individual is prone to good physical health and more harmonious relationships.

Open minded people command higher earnings and ‘agreeable’ types are popular and have lots of friends.

‘The advantage of our methodology is it is relatively simple – it does not rely on 3D scanners or 3D facial landmark maps – and can be easily implemented using a desktop computer.’

WHAT ARE THE FIVE PERSONALITY TRAITS?

The Big Five personality framework theory uses these descriptors to outline the broad dimensions of people’s personality and psyche.

Beneath each broad category is a number of correlated and specific factors.

Here are the five main points:

Openness – this is about having an appreciation for emotion, adventure and unusual ideas.

People who are generally open have a higher degree of intellectual curiosity and creativity.

They are also more unpredictable and likely to be involved in risky behaviour such as drug taking.

These people are self-disciplined and act dutifully, preferring planned as opposed to spontaneous behaviour.

They can sometimes be stubborn and obsessive.

Extroversion – these people tend to seek stimulation in the company of others and are energetic, positive and assertive.

They can sometimes be attention-seeking and domineering.

Individuals with lower extroversion are reserved, and can be seen as aloof or self-absorbed.

Agreeableness – these individuals have a tendency to be compassionate and cooperative as opposed to antagonistic towards other people.

Sometimes people who are highly agreeable are seen as naive or submissive.

People who have lower levels of agreeableness are competitive or challenging.

Neuroticisim – People with high levels of neuroticism are prone to psychological stress and get angry, anxious and depressed easily.

More stable people are calmer but can sometimes be seen as uninspiring and unconcerned.