Bose Frames review: These might be smart sunglasses, one day

A couple of important features aren’t yet live.

If a pair of shades had intercourse with a set of headphones, you’d get the Bose Frames. However, they’re more like sunglasses that are pregnant with baby speakers rather than a proper blend of the two. The idea behind the Bose Frames is to offer wireless audio without completely obscuring your ears while providing your eyes some sun protection. Because these days, it’s no longer enough for gadgets to just be one thing, I guess. The Bose Frames are already available for $200, but whether you should drop that money on them depends how badly you need to hear your surroundings and your music at the same time.

Embedding wireless headphones into a pair of sunglasses without bone conduction sounds like a fantastic idea. Too bad the Bose Frames offer basically no bass and are easily overpowered by environmental noise. Upcoming gesture-based interaction and audio AR could make the Frames more helpful, but those features aren’t live yet. For now, you’re better off waiting on an updated model or till the promised features launch. 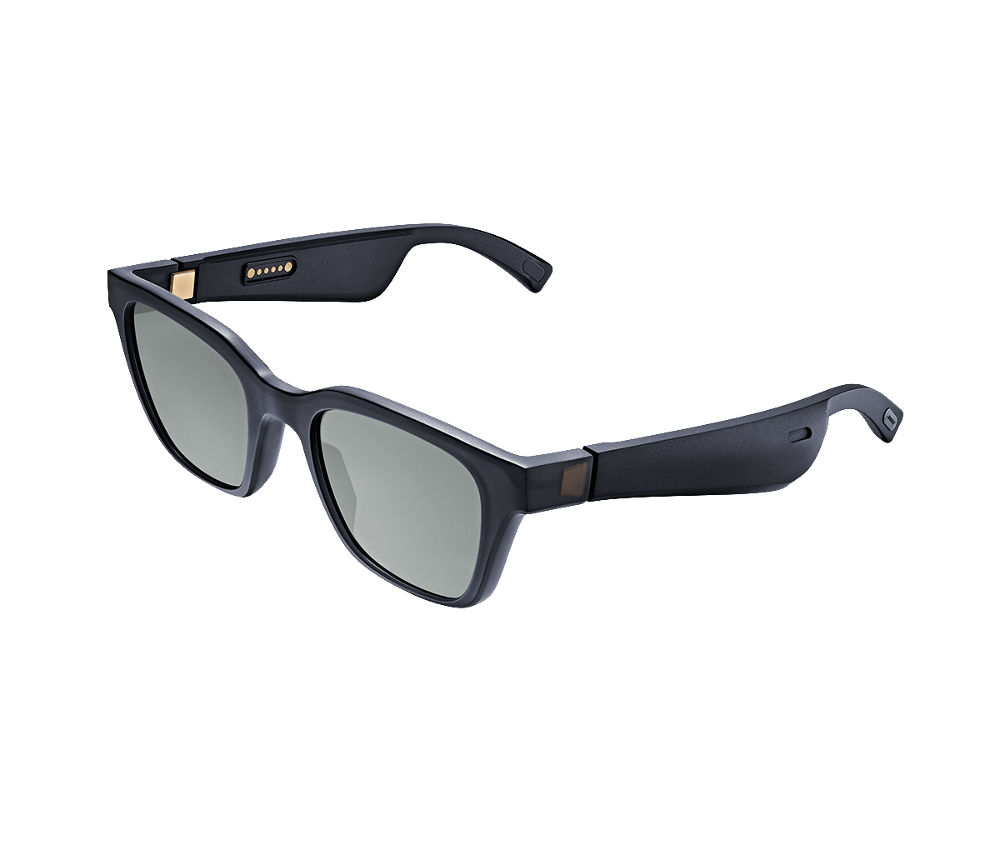 I’m fascinated by the idea of the Bose Frames. We’ve seen companies try to do open-ear headphones before — whether it’s AfterShokz with bone conduction or Sony with its Xperia Ear Duo earbuds. The benefit is that you can hear your music without your ears being blocked and therefore stay aware of surrounding sounds. But no one’s nailed the audio quality nor the design for such devices yet. And Bose is no different. I do think the Frames are a step in the right direction though. Bose has a compelling take on the technology that uses speakers and inverse audio instead of bone conduction.

That’s what makes the Bose Frames intriguing. They’re not only sunglasses but also Bluetooth headphones built into a pair of shades. There’s a speaker on each arm that plays music right at your ear, as well as two along the underside of each arm that push out inverse audio to cancel out what you’re playing and, theoretically at least, prevent you from annoying everyone around you with your 300th Ariana Grande song in a row. There’s also a pair of microphones on board so you can take calls or talk to Siri or Google Assistant. Two models are available right now: the Alto, which is a more traditional Wayfarer style, and the Rondo, featuring a pair of round lenses that make it feel owlish. I prefer the Alto; its classic look is more appealing. However, they feel almost as cheap as the 3D-printed prototype I saw last year. It’s the matte plastic combined with the light weight that rubs me the wrong way, but at least the company promises there are new styles coming soon.

My other minor gripe with the Frames is the slightly strange fit. I have a wide face so Bose provided me with the larger of two available sizes, but it still felt snug around my cheekbones, probably due to the arms that are engorged to house components. If I wore the Frames for longer than an hour they would start to bother me. Otherwise, though, the shades are fairly comfortable.

Since these are sunglasses, you’re presumably going to wear them… you know, in the sun. But should you have them on when it’s raining (like I did) or by a pool, you won’t have to worry too much about getting them wet. The Frames are IPX2 water-resistant, which means they’ll survive a quick splash but aren’t meant for going underwater. Like most sunglasses, the Frames filter out 99 percent of UVA and UVB rays, but they aren’t polarized, so they won’t protect against glare from reflective surfaces like snow or water.

To control your music or digital assistant, there’s a button on the underside of the right arm. Most people I showed the Frames to assumed there was a touch-sensitive panel on the arm. They’re wrong — there’s only the button. It offers basic controls: Press once to play, pause music or answer calls. Press twice to skip tracks and three times to go back, and hold down to trigger the voice assistant. The button feels a little sharp and is quite small so trying to double or triple click was sometimes tricky. I also wish there were volume controls on the device. I hated having to whip out my phone anytime I wanted to turn the volume up or down.

Changing the volume is something I did pretty often, too, given how easily the Frame’s speakers were overpowered by environmental noise. In a car or on New York streets, I usually set the device at 80 percent and can hear my Top 40 hits pretty well. But I have to set it to max on the train, and if we go through a tunnel or I walk past some construction on the streets, I basically can’t hear the music at all.

The good news is that in general I didn’t need to go as loud as 100 percent. The bad news is that when I did, people about an arm’s length away would start being able to hear the embarrassing recordings of my singing lessons that I was playing. This sound leakage doesn’t happen until you push the volume up past about 80 percent, though, and it happens with many other regular headphones too. 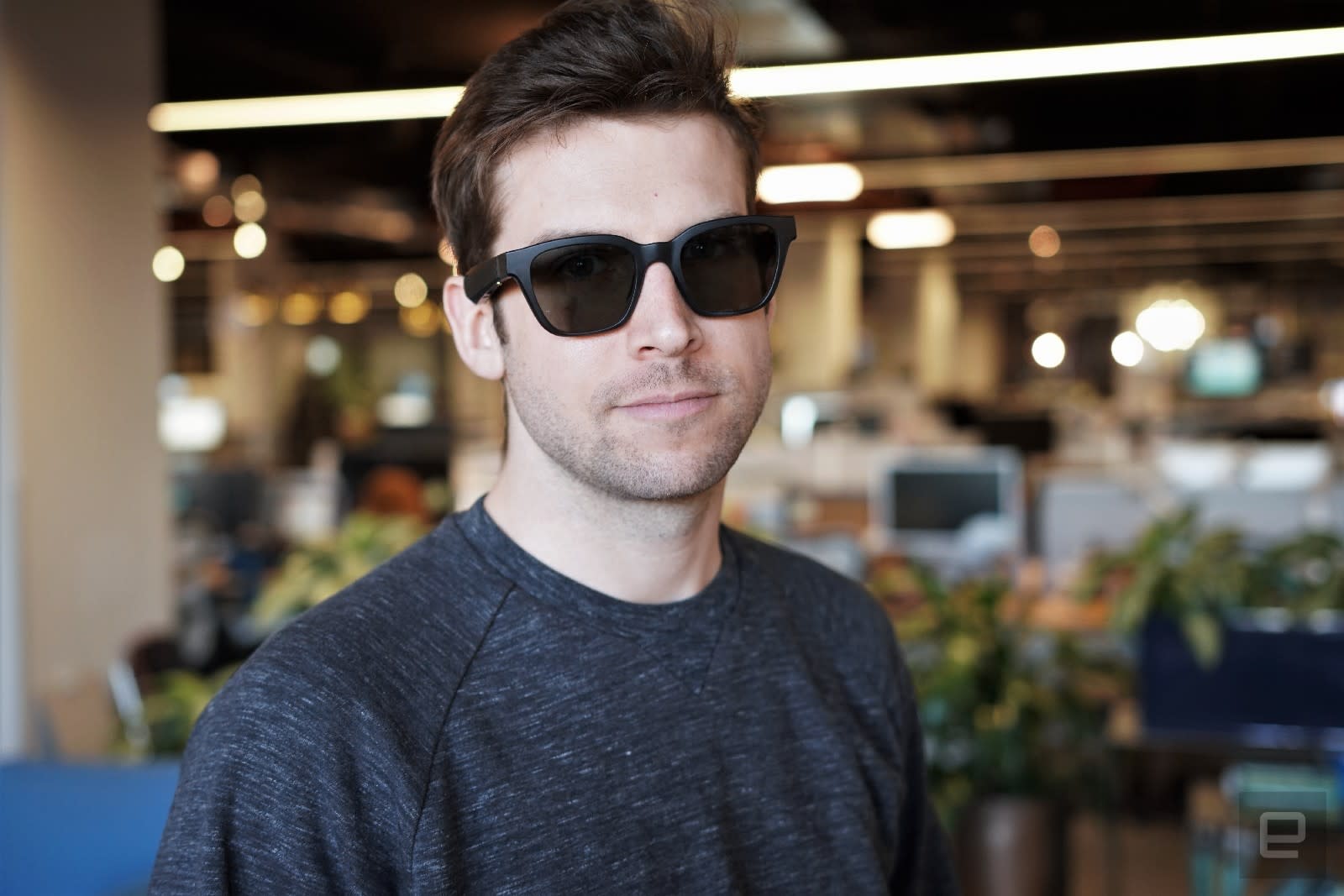 The Frames delivered decent-enough audio. But there was basically no bass, which made songs like Sam Smith’s “Dancing With a Stranger” far less enjoyable than on my earbuds. I found that devices like the AfterShokz Xtrainerz and Optishokz Revvez, which use bone conduction to amplify sound, were much louder and had stronger bass. But I didn’t care for the irritating way they vibrated. I also can’t wear the Xtrainerz properly, since they need to wrap around the back of your skull for a good fit. They’re designed for people who don’t have long, thick hair like I do.

The Bose Frames are especially great for someone like me, who hates earbuds, detests wires and doesn’t like the way over-ear headphones mess up my hair. But let’s be real, that’s a really niche and specific situation.

I also like that you can have hands-free phone conversations via the Frames, and all the people I spoke to with the eyewear said they heard me just fine.

The Frames only offer mediocre battery life though. It’s rated to endure about three hours of nonstop playback or 12 hours of standby. I could get through about two hours of music (with breaks in between) before needing a charge, but I was able to go days on standby without plugging the Frames in. That’s shorter than the four-hour runtime Sony promises for the Xperia and the six hours for the OptiShokz Revvez, but we haven’t had a chance to put those claims to the test yet. Most other true wireless buds last about three to five hours, which puts the Frames on the shorter end of the spectrum. Noise canceling and Bluetooth headphones generally last hours longer though.

Bose wants Frames to be more than just a hybrid headphone-sunglass device. The company is working on making the shades more useful by letting you respond to audio cues with head movements. For example, if Assistant asks whether you want to reply to an incoming message, you can just nod to confirm instead of having to reach up and tap a button. When this system rolls out in a few months, you’ll be able to do things like navigate through an audio menu by turning your head left or right, then selecting a choice by nodding.

Bose also plans to launch its audio-based AR ecosystem to make the Frames much more helpful. For instance, if you’re walking through a new neighborhood, it might alert you to popular restaurants and landmarks. It could also help you navigate to your destination by telling you when to take your next turn.

I checked out an early version of Bose’s audio-enriched world and gesture-based navigation at SXSW last year and was impressed by the promise of sound-based AR. And it had no problems recognizing when I nodded or shook my head.

Those two features could make the Frames more useful than your typical open-ear headphones. And all it’s waiting on is a firmware update. So those of you who’ve already bought them won’t need to spend more money. That’s good news, since these things aren’t cheap. At $200, though, its price is in line with similar headphones. The OptiShokz Revvez comes in at about the same price, for example, while the Sony Xperia Ear Duo costs $280.

As a debut effort, the Bose Frames are more than just a novelty — at least they actually work. But not well enough yet. Plus, you probably shouldn’t be wearing your sunglasses at night or at the gym (unless you’re super thick-skinned), which kind of limits their usefulness. Bose says it intends to make prescription lens or clear options available as well as implement the audio technology into other formats like bike or ski helmets. But for now, you’re better off just waiting for a second-generation model or the promised updates.