A BLACK hole has been spotted spinning so fast it is almost BREAKING the laws of physics.

Indian space agency Tata Institute of Fundamental Research (TIFR) reported a black hole within the Milky Way is spinning so fast it is changing the face of space around it.

The black hole, found in the binary star system called 4U 1630-47, was spotted thanks to the X-rays it was emitting by India’s AstroSat and Nasa’s Chandra X-Ray Observatory.

Albert Einstein theorised in his famous theory of relativity that nothing can move faster than the speed of light – 670 million miles an hour (299,792,458 metres per second).

However, the black hole, which was originally observed in 2016, is close to breaking this universal limit as it spirals at 90 percent of this speed.

The rapid movement of the black hole is causing gas, dust and other celestial debris to be sucked in by the entity at a more rapid pace than usual.

However, this also meant it was spewing more materials out in the form of X-rays which made it easier to observed.

Speaking to the Hindustan Times, Sudip Bhattacharyya of TIFR, and principal investigator of Astrosat’s Soft X-ray Telescope (SXT), said of the results which will be published in next month’s Astrophysical Journal: “As black holes get created, mass and spin rate are two properties that characterise them.

“Mass can be measured more easily as it has a long-range effect because of gravity as the black hole gets created.”

Simulation reveals what a journey into a black hole looks like

Only four black holes have been found to spin at such an extreme pace.

The first was discovered in 2008 using NASA’s Chandra X-ray Observatory.

Lead author Rodrigo Nemmen said at the time: “We think these monster black holes are spinning close to the limit set by Einstein’s theory of relativity, which means that they can drag material around them at close to the speed of light. 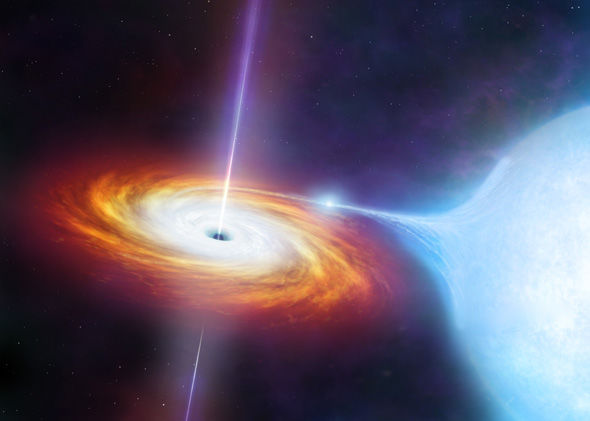 Black holes consumer everything in their wake (Image: GETTY)

“Conditions around a stationary black hole are extreme, but around a rapidly spinning one would be even worse.”

“This might help us explain the source of these incredible jets that we see stretching for enormous distances across space.”