Quantum physics is arguably the greatest intellectual triumph in the history of human civilization, but to most people it seems like it’s too remote and abstract to matter. This is largely a self-inflicted wound on the part of physicists and pop-science writers: when we talk about quantum physics, we usually emphasize the weird and counter-intuitive phenomena: Schrödinger’s cat in a superposition of “alive” and “dead,” Einstein’s objection to God playing dice, the weird long-distance correlations of quantum entanglement. These things are exciting because they’re exotic, but investigating them in the lab requires isolating very simple quantum systems, and it can be hard to see any connection between these phenomena and everyday life.

In fact, though, quantum physics is all around us. The universe as we know it runs on quantum rules, and while the classical physics that emerges when you apply quantum physics to enormously huge numbers of particles seem very different, there are lots of familiar, everyday phenomena that owe their existence to quantum effects. Here are a few examples of things you probably run into in your everyday life without realizing that they’re quantum: 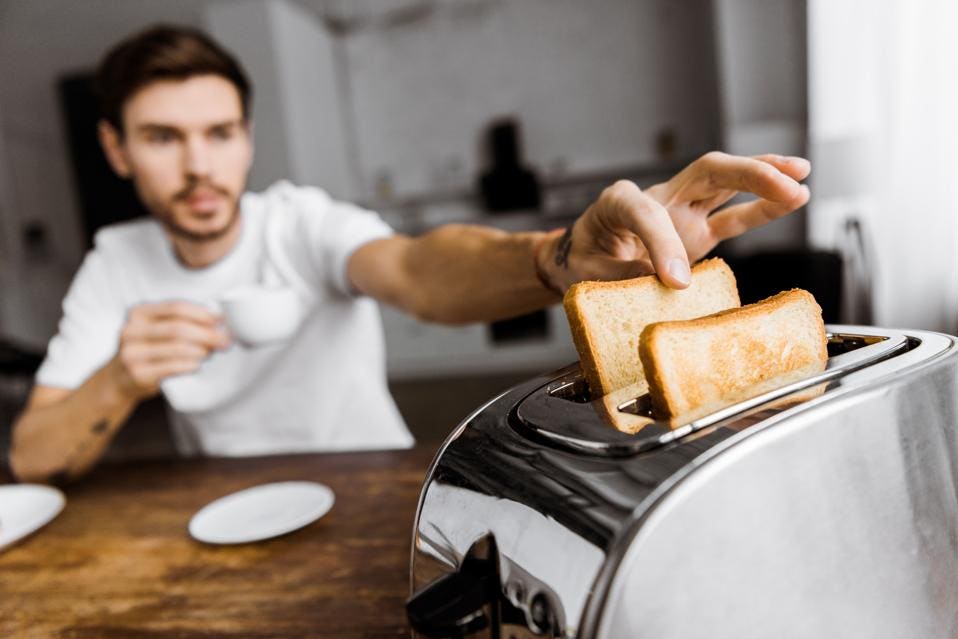 Toasters: The red glow of a heating element as you toast a slice of bread or a bagel is a very familiar sight for most of us. It’s also the place where quantum physics got its start: Explaining why hot objects glow that particular color of red is the problem that quantum physics was invented to solve.

The color of light emitted by a hot object is an example of the sort of simple, universal phenomenon that’s catnip for theoretical physicists: no matter what an object is made of, if it can survive being heated to a given temperature, the spectrum of light it emits is exactly the same as for any other substance. That sort of universal behavior drew in a lot of really bright physicists in the late 1800’s, but none were able to crack the problem.

The fact that the light was independent of the composition suggested a simple universal approach: You tally up all the colors of light that an object might emit, and give each of them an equal share of the heat energy contained in the object. The problem with this is that there are a lot more ways to emit high-frequency light than low-frequency light, which suggests that rather than a pleasant warm res glow, your toaster should be spraying x-rays and gamma rays all over the kitchen. That’s clearly not happening (a good thing!) so something else must be going on.

The solution to this problem was found by Max Planck, who introduced the “quantum hypothesis” (giving the eventual theory its name) that the light could only be emitted in discrete chunks of energy, integer multiples of a small constant times the frequency of the light. For high-frequency light, this energy quantum is larger than the share of heat energy allotted to that frequency, and thus no light is emitted at that frequency. This cuts off the high-frequency light, and leads to a formula that matches the observed spectrum of light from hot objects to great precision.

So, every time you toast bread, you’re looking at the place where quantum physics got its start. 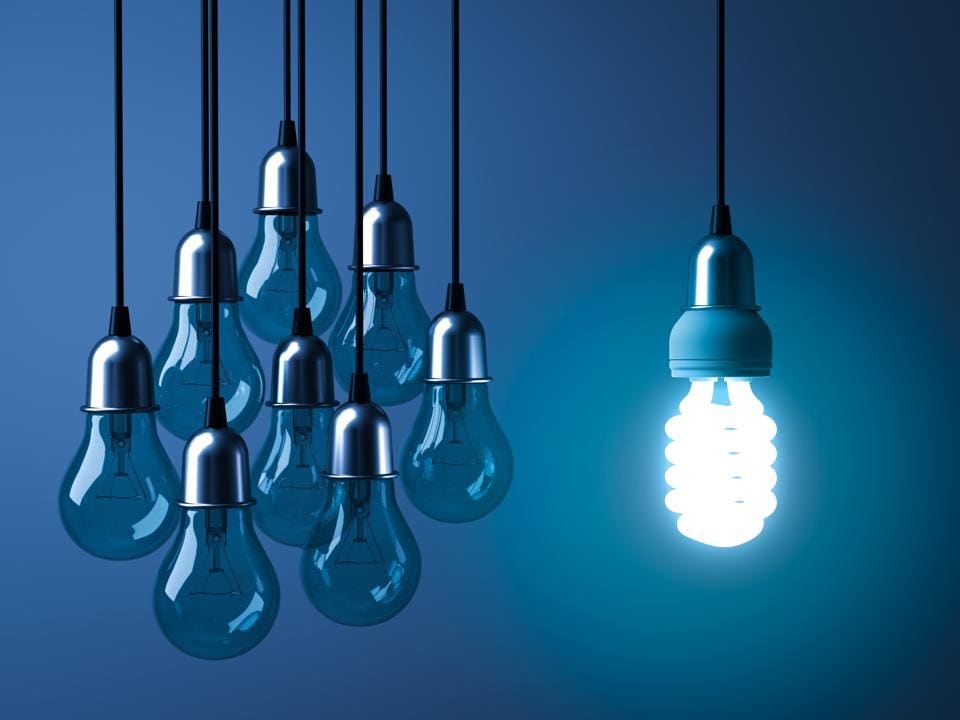 Fluorescent Lights: Old-school incandescent light bulbs make light by getting a piece of wire hot enough to emit a bright white glow, which makes them quantum in the same way that a toaster is. If you have fluorescent bulbs around– either the long tubes or the newer twisty CFL bulbs, you’re getting light from another revolutionary quantum process.

Way back in the early 1800’s, physicists noticed that every element in the periodic table has a unique spectrum: if you get a vapor of atoms hot, they emit light at a smallish number of discrete frequencies, with a different pattern for every element. These “spectral lines” were quickly used to identify the composition of unknown materials, and even to discover the presence of previously unknown elements– helium, for example, was first detected as a previously unknown spectral line in light from the Sun.

While this was undeniably effective, nobody could explain it until 1913 when Niels Bohr picked up on Planck’s quantum idea (which Einstein extended in 1905) and introduced the first quantum model of an atom. Bohr suggested that there are certain special states in which an electron can happily orbit the nucleus of an atom, and that atoms absorb and emit light only as they move between those states. The frequency of the light absorbed or emitted depends on the energy difference between states in the way introduced by Planck, thus giving a set of discrete frequencies for any particular atom.

This was a radical idea, but it worked brilliantly to explain the spectrum of light emitted by hydrogen, and also the x-rays emitted by a wide range of elements, and quantum physics was off to the races. While the modern picture of what’s going on inside an atom is very different than Bohr’s initial model, the core idea is the same: electrons move between the special states inside atoms by absorbing and emitting light of particular frequencies.

This is the core idea behind fluorescent lighting: Inside a fluorescent bulb (either long tube or CFL) there’s a little bit of mercury vapor that’s excited into a plasma. Mercury happens to emit light at frequencies that mostly fall in the visible spectrum in a way that can fool our eyes into thinking the light looks white. If you look at a fluorescent bulb through a cheap diffraction grating like you’ll find in novelty glasses, you’ll see a few distinct colored images of the bulb, where an incandescent bulb gives a continuous rainbow smear.

So, any time you use fluorescent lights to light your home or office, you have quantum physics to thank for it. 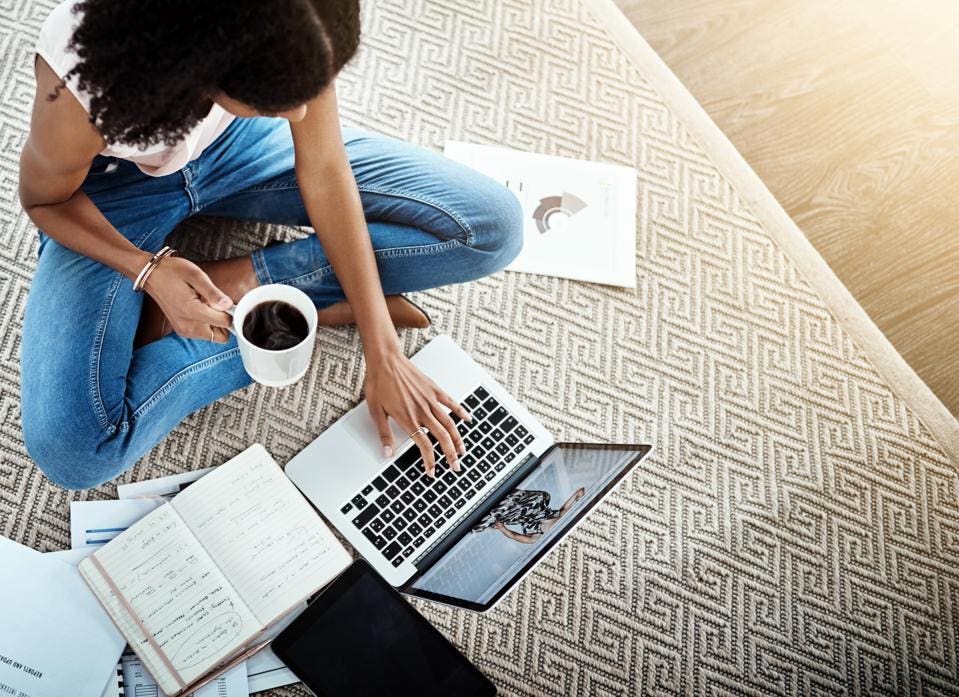 Computers: While Bohr’s quantum model was undeniably useful, it didn’t initially come with a physical reason as to why there should be special states for electrons within atoms. That didn’t come for almost ten years, but once the idea got locked it, it turned out to be the basis for the most transformative technological revolution of the last century.

The radical idea that provided a physical basis for Bohr’s special energy states came from Louis de Broglie, a French Ph.D. student from an aristocratic family. He suggested that just as Planck and Einstein had introduced a particle-like nature for light waves (where a beam of light can be thought of as a stream of “light quanta” each carrying one unit of energy for that frequency), there might be a corresponding wave-like behavior for particles like electrons. If you give electrons a wavelength that depends on their momentum, you find that there are “standing wave” orbits where the electron wave completes an integer number of oscillations as it goes around the nucleus, and these have exactly the right energies to be Bohr’s special states in hydrogen.

This wave behavior is something that can be directly measured, and it quickly was in both the US and UK. Thinking about those waves led Erwin Schrödinger to his wave equation, and thus one of the main approaches to the full modern theory of quantum mechanics.

The wave nature of electrons profoundly changes our understanding of how they move through materials, leading to our modern understanding of energy bands and band gaps within materials. We can use this physics to control the electrical properties of semiconductors, and by sticking together bits of silicon with the exact right admixture of other elements, we can make tiny transistors that form the basic bits used to process digital information.

So, every time you turn on your computer (say, to read a blog post about quantum physics), you’re exploiting the wave nature of electrons, and the unprecedented control of materials that allows. It may not be the sexy kind of quantum computer, but every modern computer needs quantum physics to work properly. 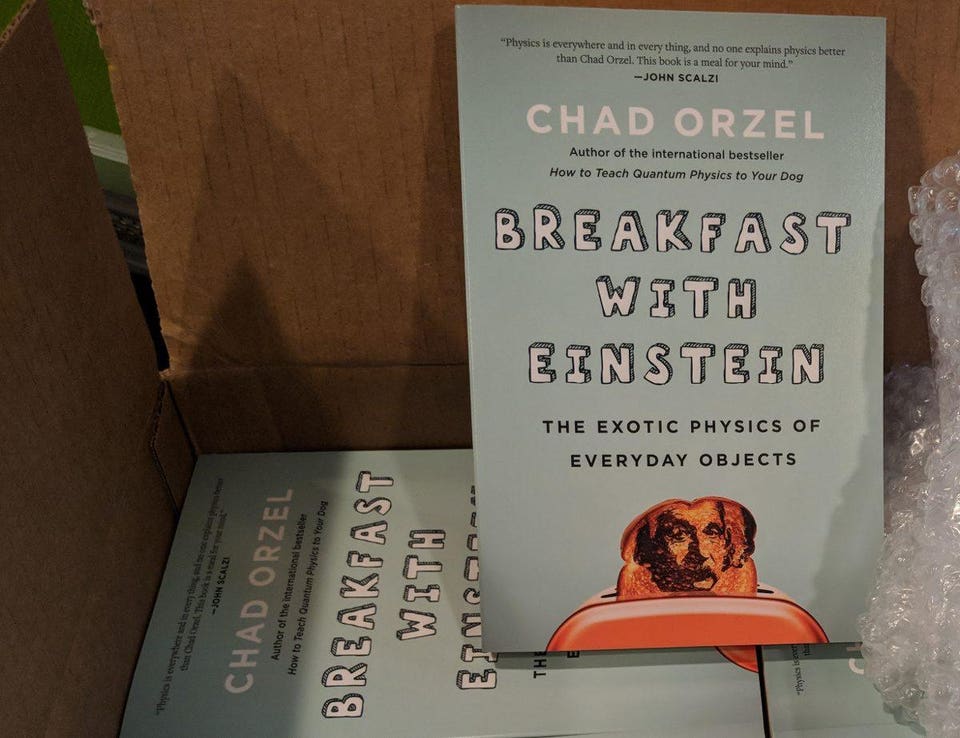 Author copies of the US edition of BREAKFAST WITH EINSTEIN.CHAD ORZEL

These are just a few of the ways that quantum physics shows up in the course of your everyday life. If you’d like to see these discussed in much more detail, along with several other topics that I may return to in later posts, you should check out my new book, Breakfast with Einstein, available now in the UK from Oneworld Publications and next week in the US from BenBella Books. Just in time for all your winter solstice holiday gift-giving needs…

I’m an Associate Professor in the Department of Physics and Astronomy at Union College, and I write books about science for non-scientists. I have a BA in physics from Williams College and a Ph.D. in Chemical Physics from the University of Maryland, College Park (studying la…

Chad Orzel is a physics professor, pop-science author, and blogger. His next book, Breakfast with Einstein: The Exotic Physics of Everyday Objects, will be released in December 2018.