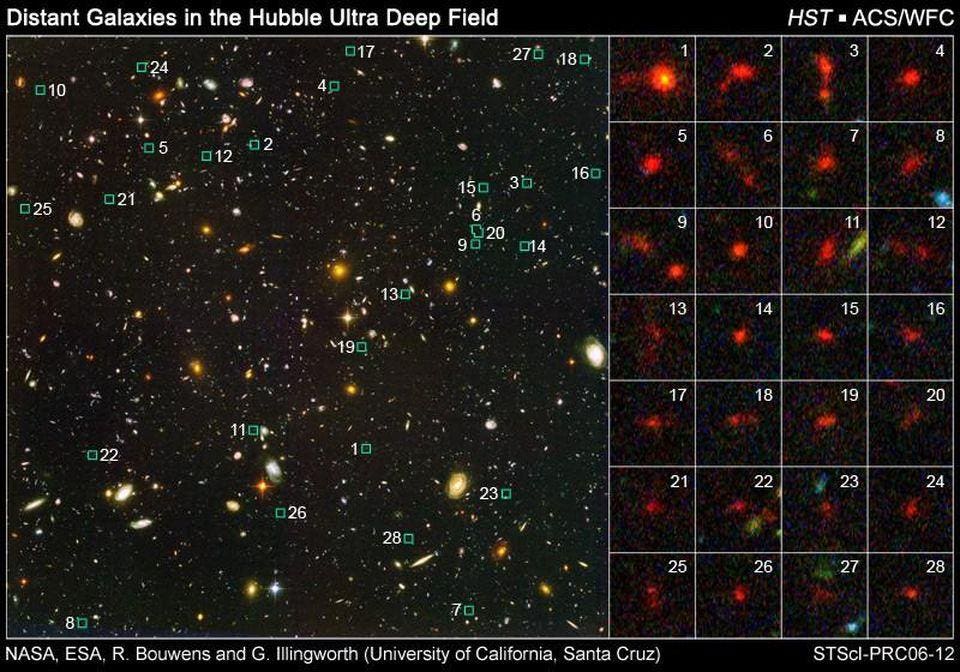 Although there are magnified, ultra-distant, very red and even infrared galaxies in the eXtreme Deep Field, there are galaxies that are even more distant out there than what we’ve discovered in our deepest-to-date views.NASA, ESA, R. BOUWENS AND G. ILLINGWORTH (UC, SANTA CRUZ)

The great cosmic abyss contains more that humanity can ever hope to see, including a slew of record-breaking objects. 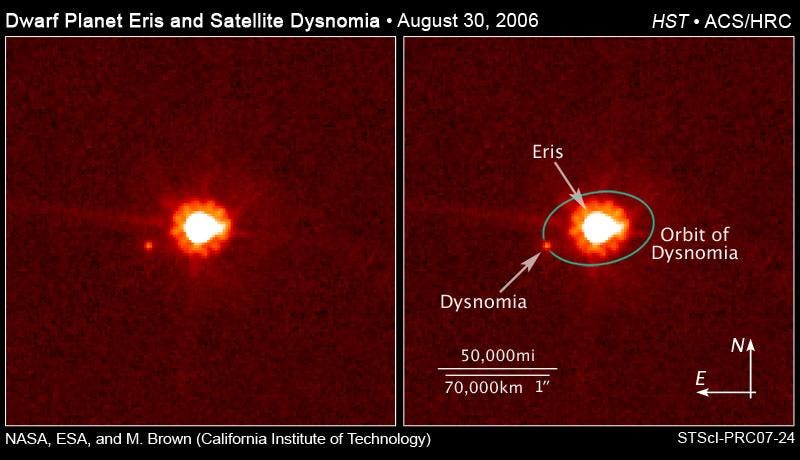 While there are many ultra-distant objects discovered, our Solar System is a supreme challenge to find objects far beyond Neptune. Eris, the most distant confirmed dwarf planet, is approximately three times the distance to Pluto, and just ~1% the brightness.NASA, ESA, AND M. BROWN

In our Solar System, Eris is the most distant known dwarf planet: over 90 AU away. 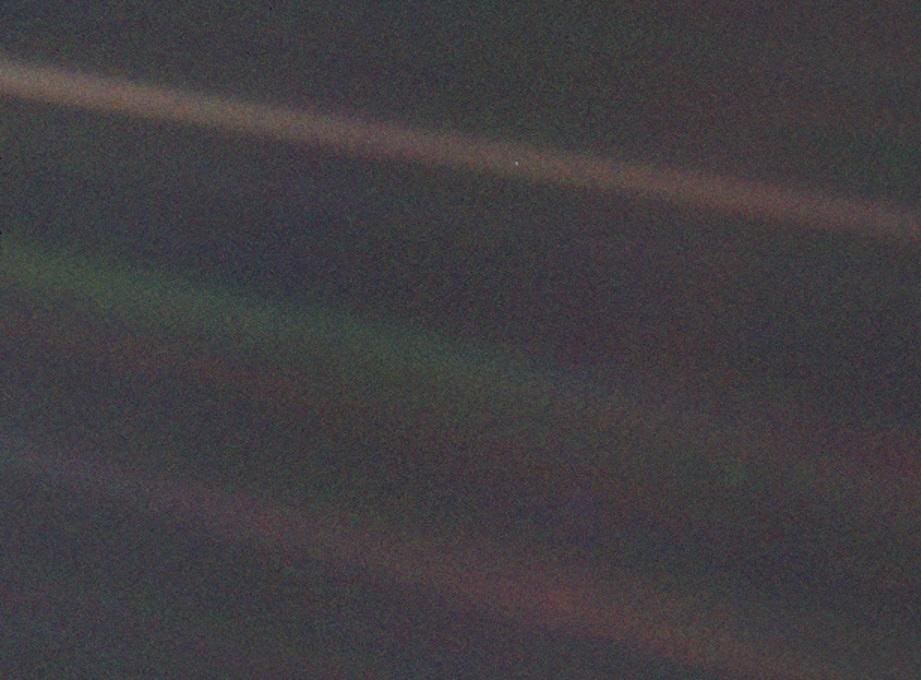 This narrow-angle color image of the Earth, dubbed ‘Pale Blue Dot’, is a part of the first ever ‘portrait’ of the solar system taken by Voyager 1. Although it has left the Sun’s heliosheath, it has not even begun to enter the Oort cloud, or approached the distance of Sedna’s aphelion. Yet at a distance of 143 AU,  Voyager 1 is the farthest human-made object from us.NASA / JPL/CALTECH 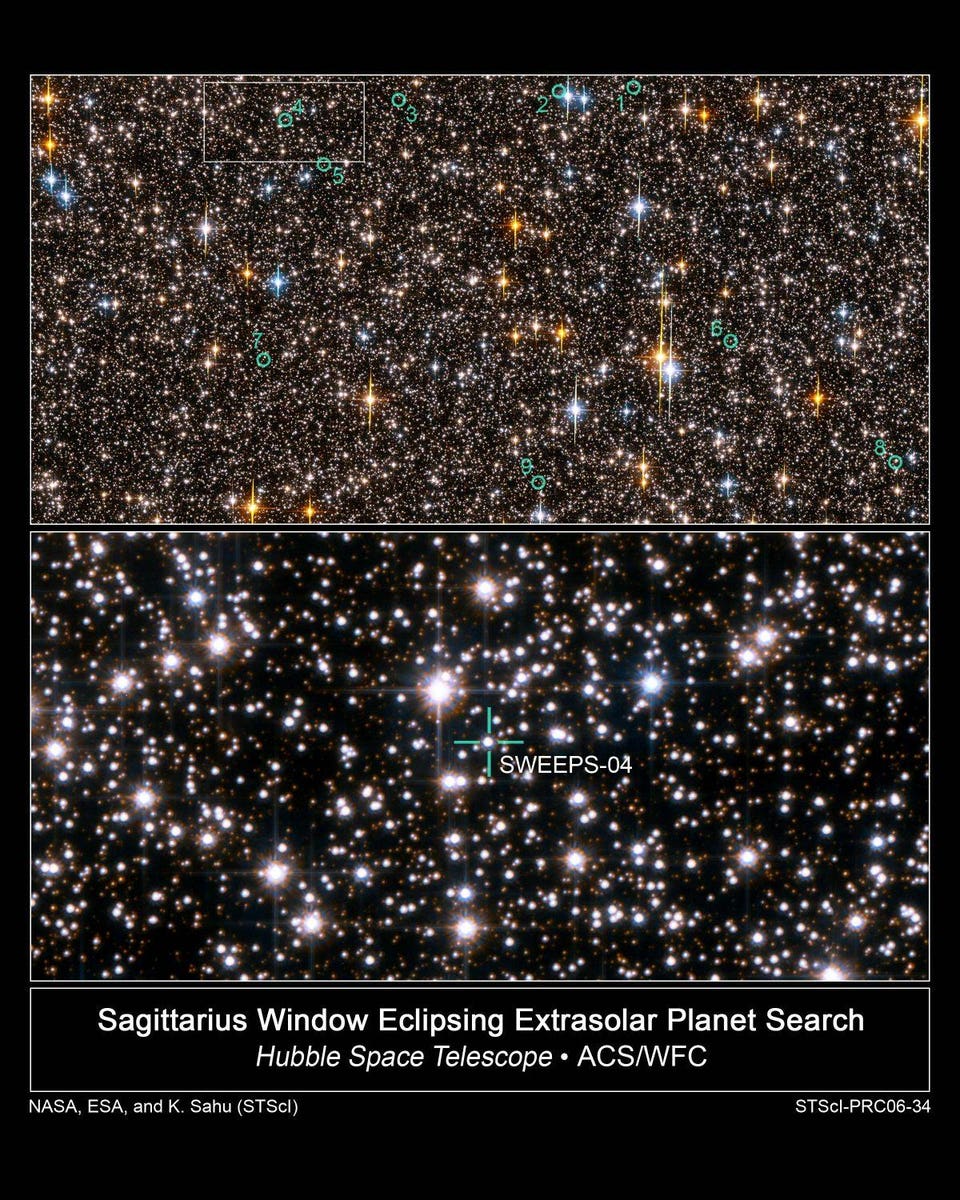 The Sagittarius Window Eclipsing Extrasolar Planet Search (SWEEPS) study, performed by Hubble, found periodic dips in brightness around some of the stars shown here, evidence for transiting planets. SWEEPS-04, whose star is shown here, is one of the most distant exoplanets (a hot Jupiter world) ever discovered.NASA, ESA, K. SAHU (STSCI) AND THE SWEEPS SCIENCE TEAM

SWEEPS-04 and SWEEPS-11 are the most distant confirmed planets, some 27,000 light-years away. 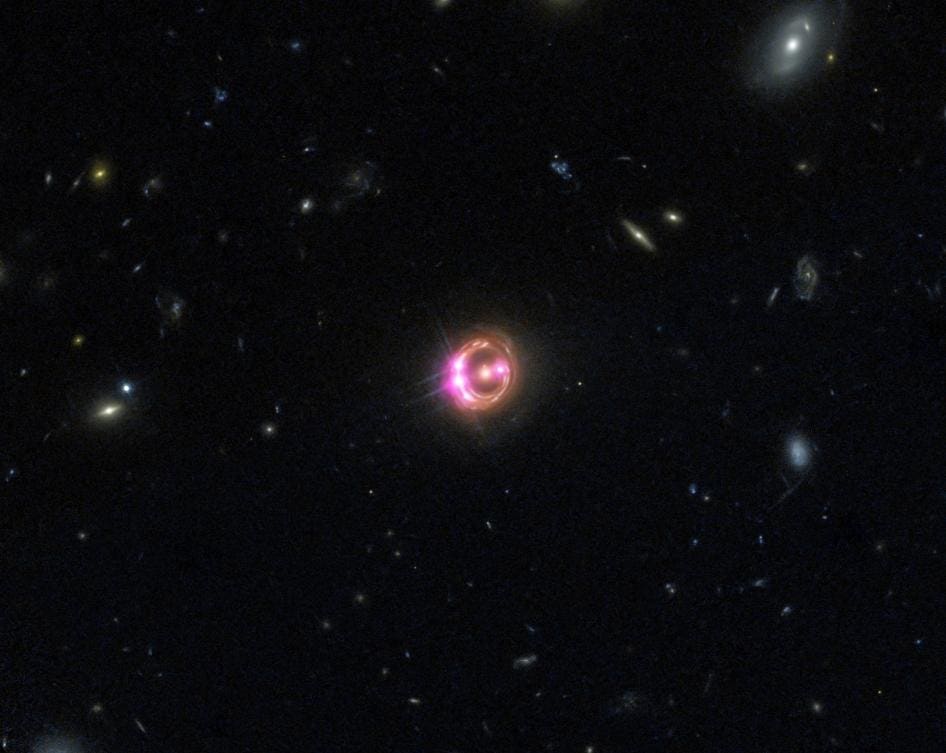 Combination image of quasar RX J1131 (center) taken via NASA’s Chandra X-ray Observatory and the Hubble Space Telescope. Microlensing events associated with this quasar provide evidence for some ~2,000 rogue/orphan planets populating the interstellar space around this quasar’s core, making this the most distant location known that contains planets.NASA/CXC/UNIV OF MICHIGAN/R.C.REIS ET AL

For planets of any type, the quasar RX J1131-1231, lensed by rogue planets, holds the record: 3.9 billion light-years distant. 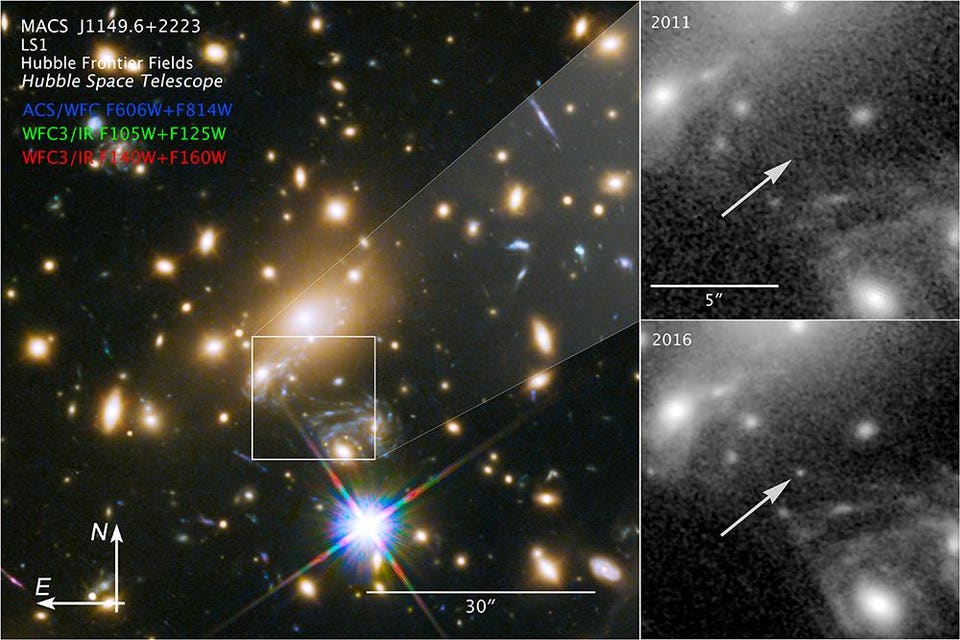 A massive cluster (left) magnified a distant star more than 2,000 times, making it visible from Earth (lower right) even though it is 9 billion light years away, far too distant to be seen individually with current telescopes. It was not visible in 2011 (upper right). The brightening leads us to believe that this was a blue supergiant star, formally named MACS J1149 Lensed Star 1.NASA, ESA, AND P. KELLY (UNIVERSITY OF MINNESOTA)

The most distant normal star is known as Icarus, 9 billion light-years away, lensed and magnified by a massive galaxy cluster. 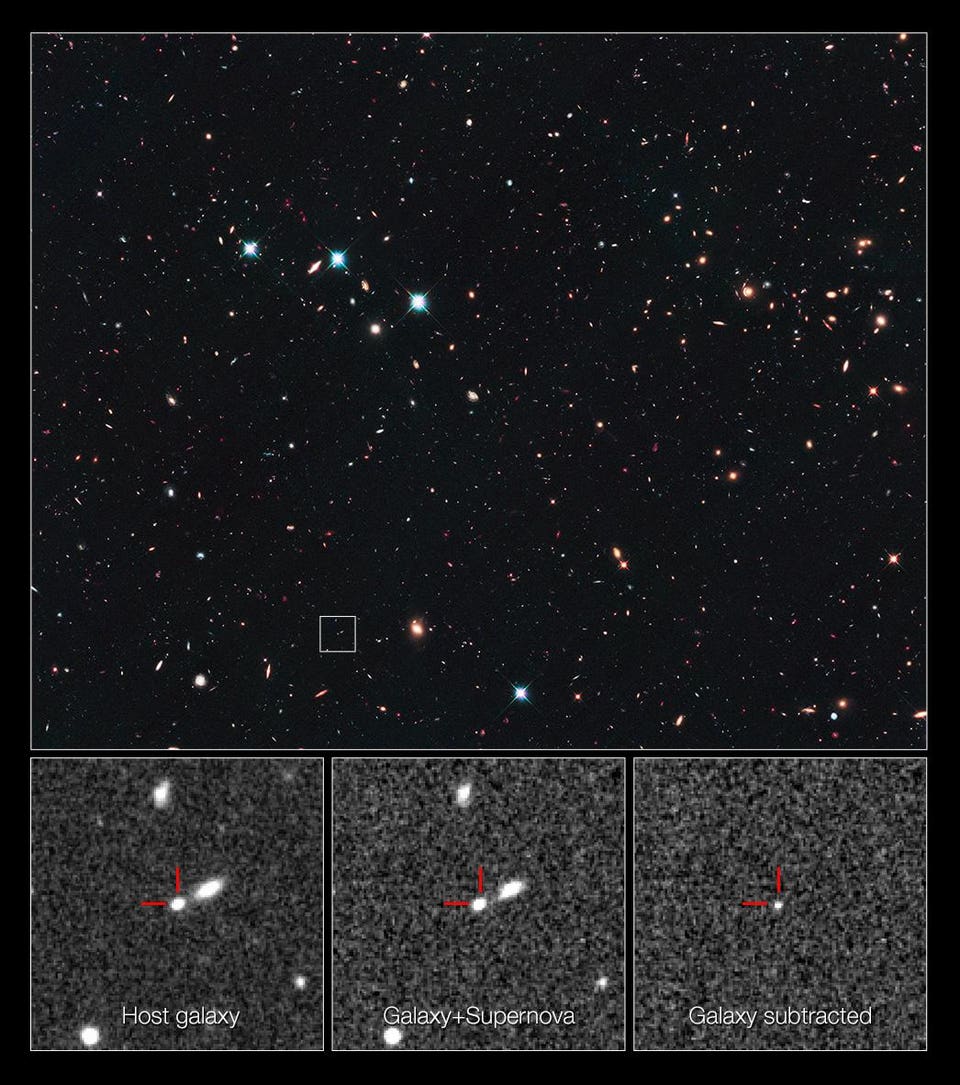 The ultra-distant supernova SN UDS10Wil, shown here, is the farthest type Ia supernova ever discovered, whose light arrives today from a position 17 billion light-years away. Even more distant supernovae of other types have been discovered, such as SN 1000+0216, which is the current record-holder at 23 billion light-years distant.NASA, ESA, A. RIESS (STSCI AND JHU), AND D. JONES AND S. RODNEY (JHU) 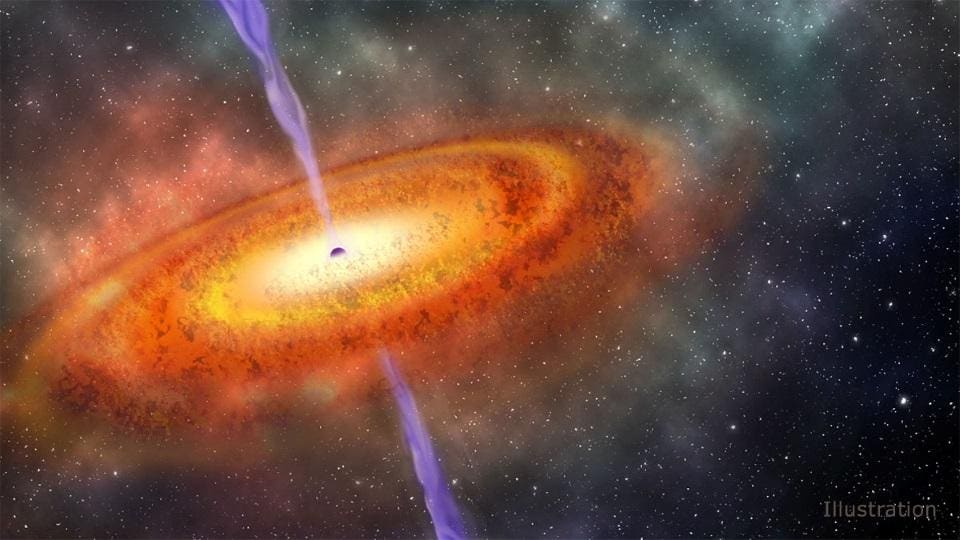 The most distant known quasar (and supermassive black hole) is ULAS J1342+0928, 29 billion light-years away. 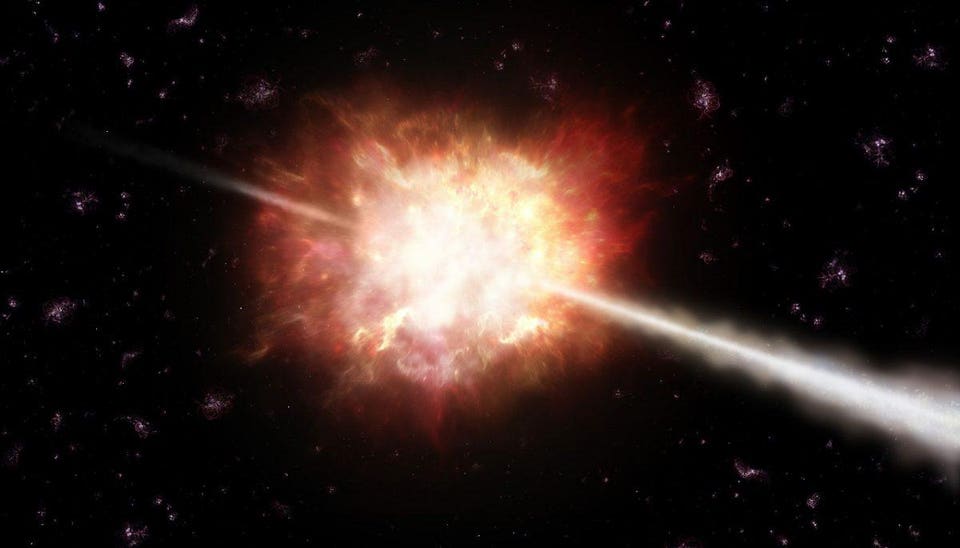 This illustration of the most distant gamma-ray burst ever detected, GRB 090423, is thought to be typical of most fast gamma-ray bursts. When one or two objects violently form a black hole, such as from a neutron star merger, a brief burst of gamma rays followed by an infrared afterglow (when we’re lucky) allows us to learn more about these events. The gamma rays from this event lasted just 10 seconds, but Nial Tanvir and his team found an infrared afterglow using the UKIRT telescope just 20 minutes after the burst.ESO/A. ROQUETTE 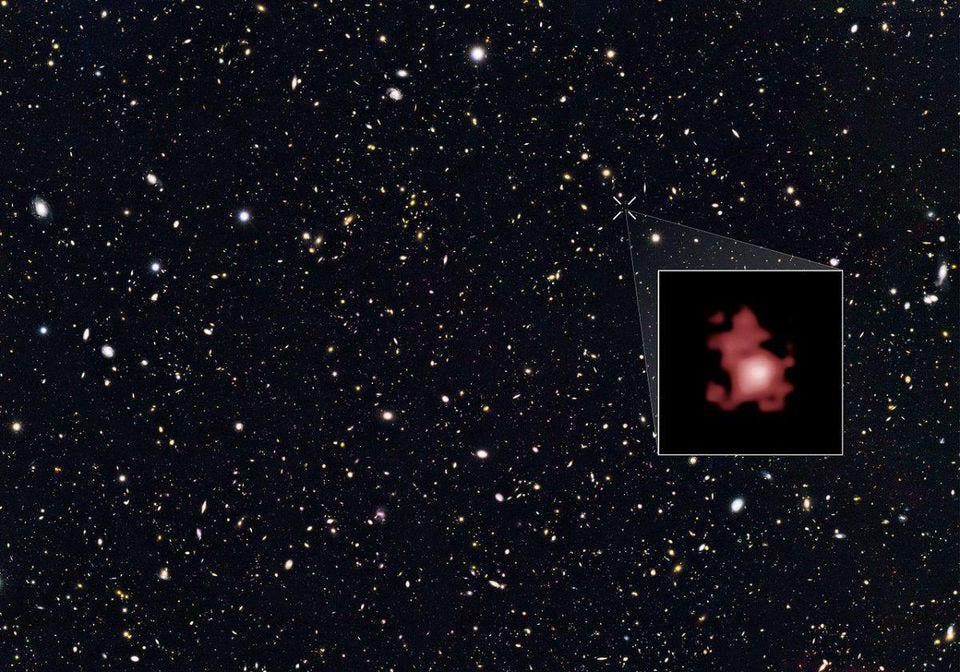 The most distant galaxy ever discovered in the known Universe, GN-z11, has its light come to us from 13.4 billion years ago: when the Universe was only 3% its current age: 407 million years old. But there are even more distant galaxies out there, and we at last have direct evidence for it.NASA, ESA, AND G. BACON (STSCI)

Finally, the most distant galaxy of all is GN-z11, a phenomenal 32 billion light-years away. 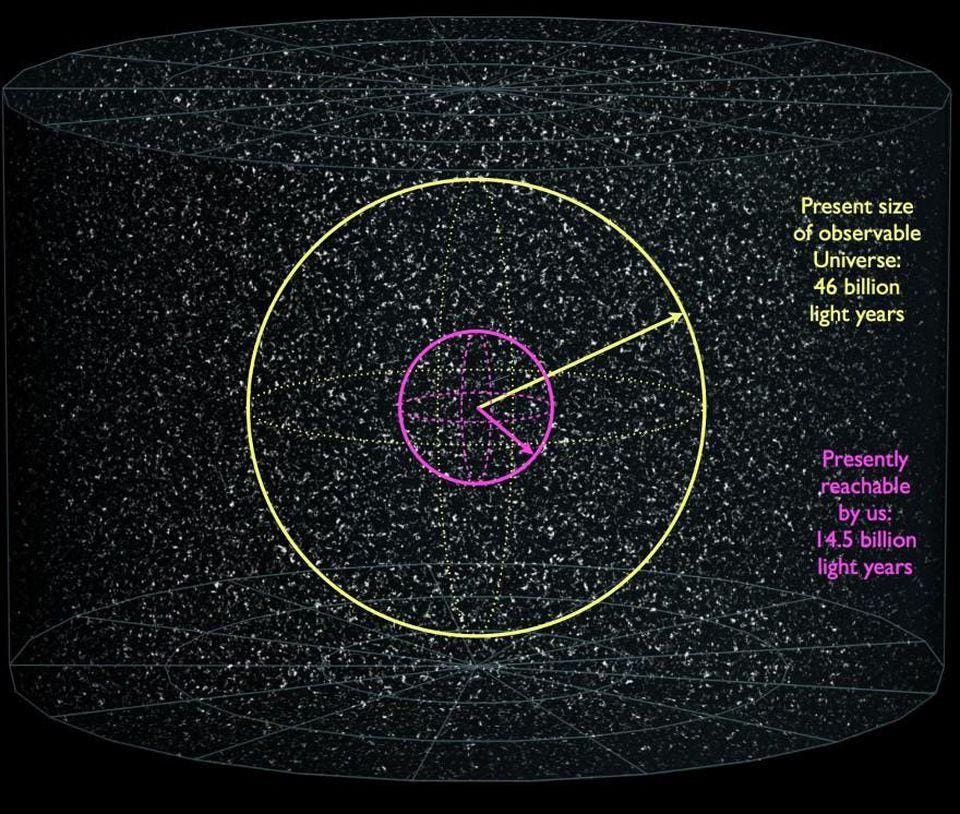 The observable (yellow) and reachable (magenta) portions of the Universe, which are what they are thanks to the expansion of space and the energy components of the Universe. 97% of the galaxies within our observable Universe are contained outside of the magenta circle; they are unreachable by us today, even in principle, although we can always view them owing to the properties of light and spacetime.E. SIEGEL, BASED ON WORK BY WIKIMEDIA COMMONS USERS AZCOLVIN 429 AND FRÉDÉRIC MICHEL

Our observable Universe, after beginning with a Big Bang 13.8 billion years ago, has been expanding ever since. 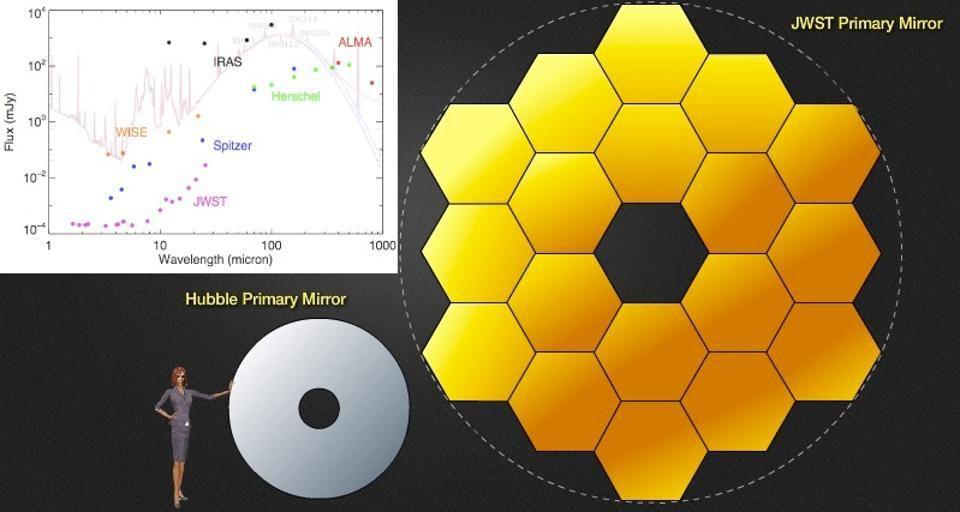 The James Webb Space Telescope vs. Hubble in size (main) and vs. an array of other telescopes (inset) in terms of wavelength and sensitivity. It should be able to see the truly first galaxies, even the ones that no other observatory can see. Its power is truly unprecedented.NASA / JWST SCIENCE TEAM

As our observational techniques and technology improve, these records will likely all be shattered by future astronomers.

Mostly Mute Monday tells the astronomical story of an object, discovery, or phenomenon in images, visuals, and no more than 200 words. Talk less; smile more.

I am a Ph.D. astrophysicist, author, and science communicator, who professes physics and astronomy at various colleges. I have won numerous awards for science writing since 2008 for my blog, Starts With A Bang, including the award for best science blog by the Institute of Ph…