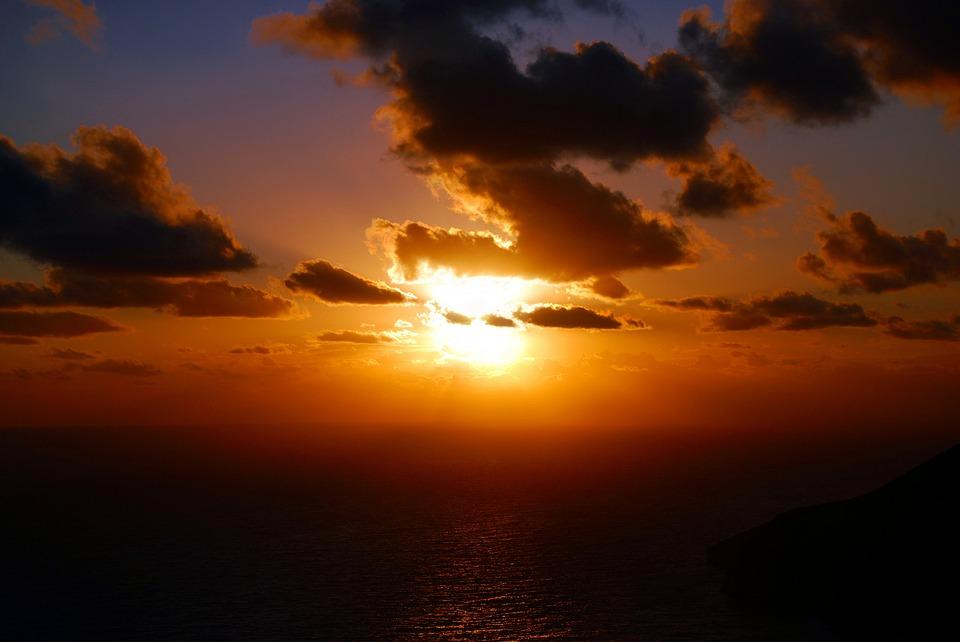 The Sun is the source of the overwhelming majority of light, heat, and energy on Earth’s surface, and is powered by nuclear fusion. But without the quantum rules that govern the Universe at a fundamental level, fusion wouldn’t be possible at all.PUBLIC DOMAIN

The greatest source of newly-produced energy in the Universe today is starlight. These large, massive, and incredibly common objects emit tremendous amounts of power through the smallest of processes: the nuclear fusion of subatomic particles. If you happen to be on a planet in orbit around such a star, it can provide you with all the energy necessary to facilitate complex chemical reactions, which is exactly what happens here, on the surface of Earth.

How does this happen? Deep inside the hearts of stars — including in our own Sun’s core — light elements are fused together under extreme conditions into heavier ones. At temperatures over about 4 million kelvin and at densities more than ten times that of solid lead, hydrogen nuclei (single protons) can fuse together in a chain reaction to form helium nuclei (two protons and two neutrons), releasing a tremendous amount of energy in the process. 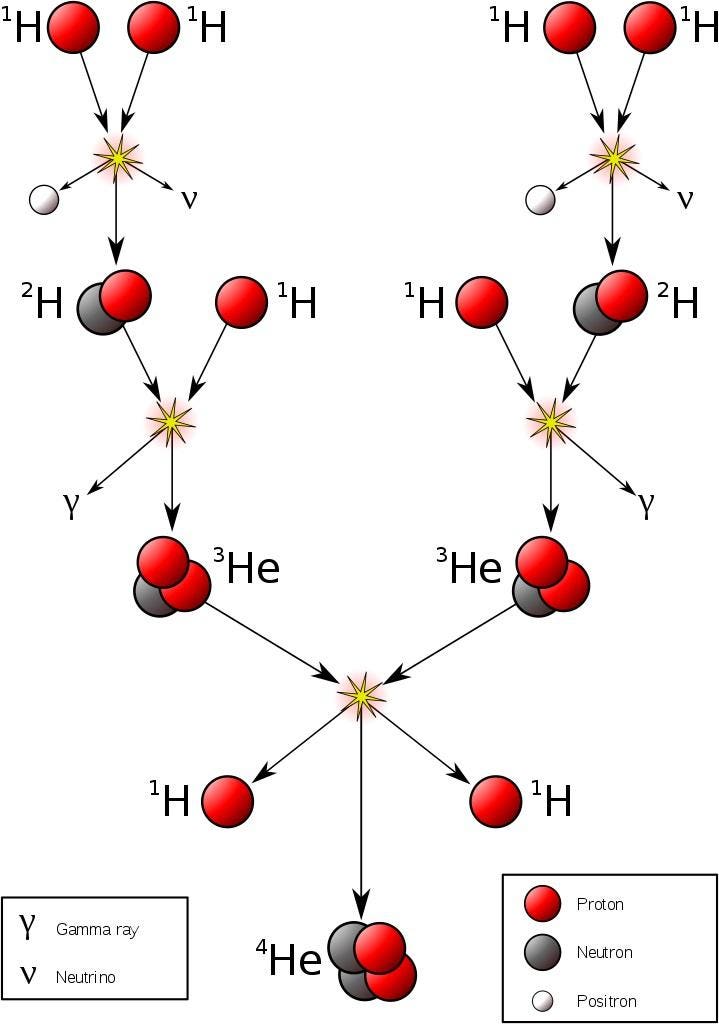 The most straightforward and lowest-energy version of the proton-proton chain, which produces helium-4 from initial hydrogen fuel. Note that only the fusion of deuterium and a proton produces helium from hydrogen; all other reactions either produce hydrogen or make helium from other isotopes of helium.SARANG / WIKIMEDIA COMMONS

At first glance, you might not think energy is released, since neutrons are ever so slightly more massive than protons: by about 0.1%. But when neutrons and protons are bound together into helium, the entire combination of four nucleons winds up being significantly less massive — by about 0.7% — than the individual, unbound constituents. This process enables nuclear fusion to release energy, and it’s this very process that powers the overwhelming majority of stars in the Universe, including our own Sun. It means that every time the Sun winds up fusing four protons into a helium-4 nucleus, it results in the net release of 28 MeV of energy, which comes about through the mass-energy conversion of Einstein’s E = mc2. 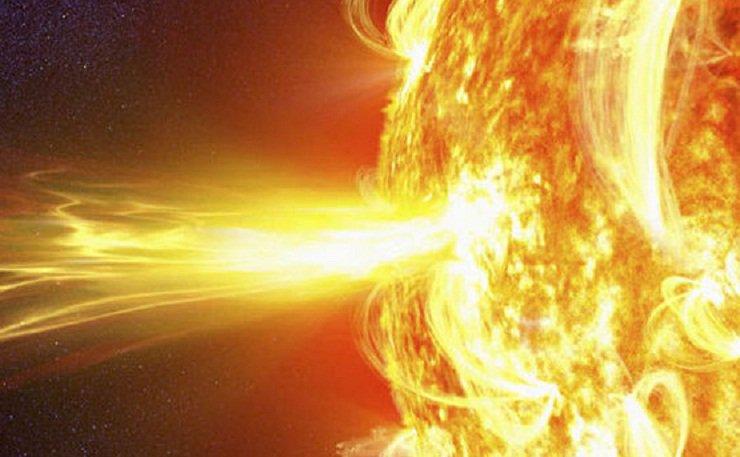 A solar flare from our Sun, which ejects matter out away from our parent star and into the Solar System, is dwarfed in terms of ‘mass loss’ by nuclear fusion, which has reduced the Sun’s mass by a total of 0.03% of its starting value: a loss equivalent to the mass of Saturn. E=mc^2, when you think about it, showcases how energetic this is, as the mass of Saturn multiplied by the speed of light (a large constant) squared leads to a tremendous amount of energy produced.NASA’S SOLAR DYNAMICS OBSERVATORY / GSFC

All told, by looking at the power output of the Sun, we measure that it emits a continuous 4 × 1026 Watts. Inside the Sun’s core, on average, a whopping 4 × 1038 protons fuse into helium-4 every second. Although this is a small amount of power-per-unit-volume — a human being metabolizing their food over the course of a day is more energetic than a human-sized volume of the Sun’s core undergoing fusion — the Sun is absolutely enormous.

Adding all of that energy together, and having it be emitted omnidirectionally on a continuous, steady basis, is what enables the Sun to power all the processes that life requires here on Earth.

The brightness distance relationship, and how the flux from a light source falls off as one over the distance squared. The Earth has the temperature that it does because of its distance from the Sun, which determines how much energy-per-unit-area is incident on our planet. The balance between the Sun’s output and the Earth’s distance is what makes life on our world possible.E. SIEGEL / BEYOND THE GALAXY

If you consider that there are some 1057 particles in the entire Sun, of which a little less than 10% are in the core, this might not sound so far-fetched. After all: 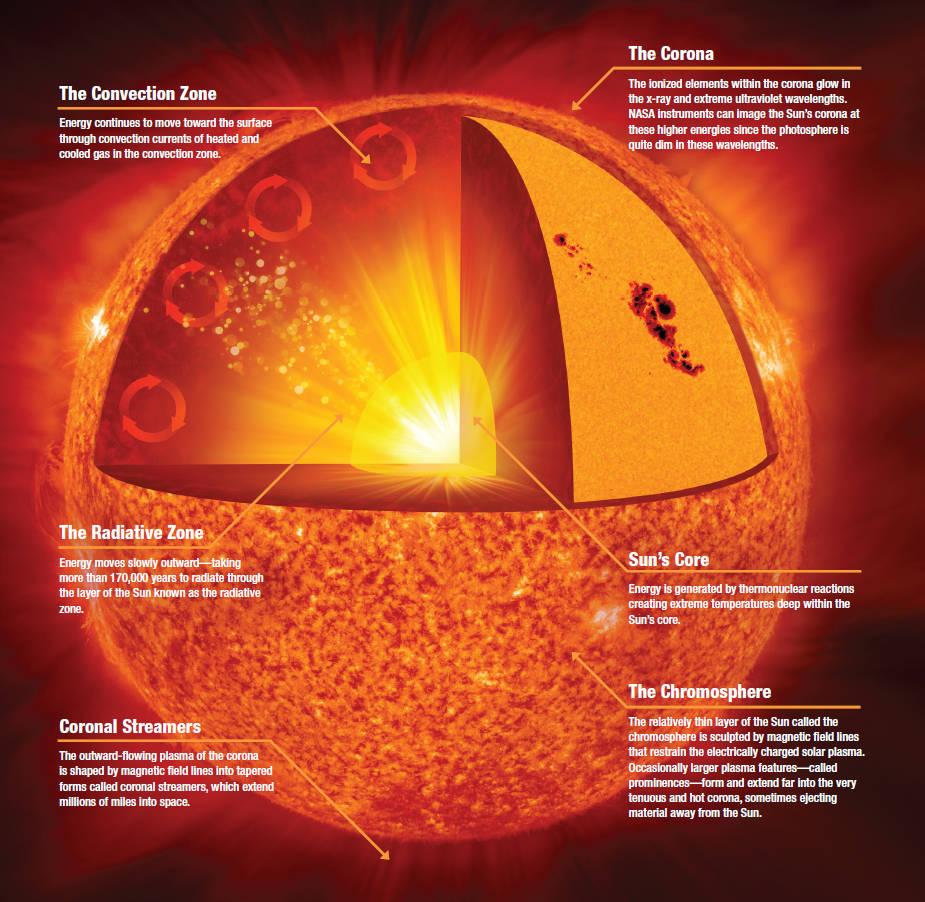 The anatomy of the Sun, including the inner core, which is the only place where fusion occurs. Even at the incredible temperatures of 15 million K, the maximum achieved in the Sun, the Sun produces less energy-per-unit-volume than a typical human body. The Sun’s volume, however, is large enough to contain over 10^28 full-grown humans, which is why even a low rate of energy production can lead to such an astronomical total energy output.NASA/JENNY MOTTAR

So even though most particles in the Sun don’t have enough energy to get us there, it would only take a tiny percentage fusing together to power the Sun as we see it. So we do our calculations, we calculate how the protons in the Sun’s core have their energy distributed, and we come up with a number for these proton-proton collisions with sufficient energy to undergo nuclear fusion.

That number is exactly zero.

The strong force, operating as it does because of the existence of ‘color charge’ and the exchange of gluons, is responsible for the force that holds atomic nuclei together. However, in order to fuse two protons into a deuteron, the first step in the proton-proton chain that fuses hydrogen into helium, one of the up quarks in a proton must be converted into a down quark, which can only occur via a weak (not strong) nuclear interaction.WIKIMEDIA COMMONS USER QASHQAIILOVE

The electric repulsion between the two positively charged particles is too great for even a single pair of protons to overcome it and fuse together with the energies in the Sun’s core. This problem only gets worse, mind you, when you consider that the Sun itself is more massive (and hotter in its core) than 95% of the stars in the Universe! In fact, three out of every four stars are M-class red dwarf stars, which achieve less than half of the Sun’s maximum core temperature.

The (modern) Morgan–Keenan spectral classification system, with the temperature range of each star class shown above it, in kelvin. The overwhelming majority of stars today are M-class stars, with only 1 known O- or B-class star within 25 parsecs. Our Sun is a G-class star, and more massive than 95% of all stars in the Universe.WIKIMEDIA COMMONS USER LUCASVB, ADDITIONS BY E. SIEGEL

Only 5% of the stars produced get as hot or hotter as our Sun does in its interior. And yet, nuclear fusion happens, the Sun and all the stars emit these tremendous amounts of power, and somehow, hydrogen gets converted into helium. The secret is that, at a fundamental level, these atomic nuclei don’t behave as particles alone, but rather as waves, too. Each proton is a quantum particle, containing a probability function that describes its location, enabling the two wavefunctions of interacting particles to overlap ever so slightly, even when the repulsive electric force would otherwise keep them entirely apart. 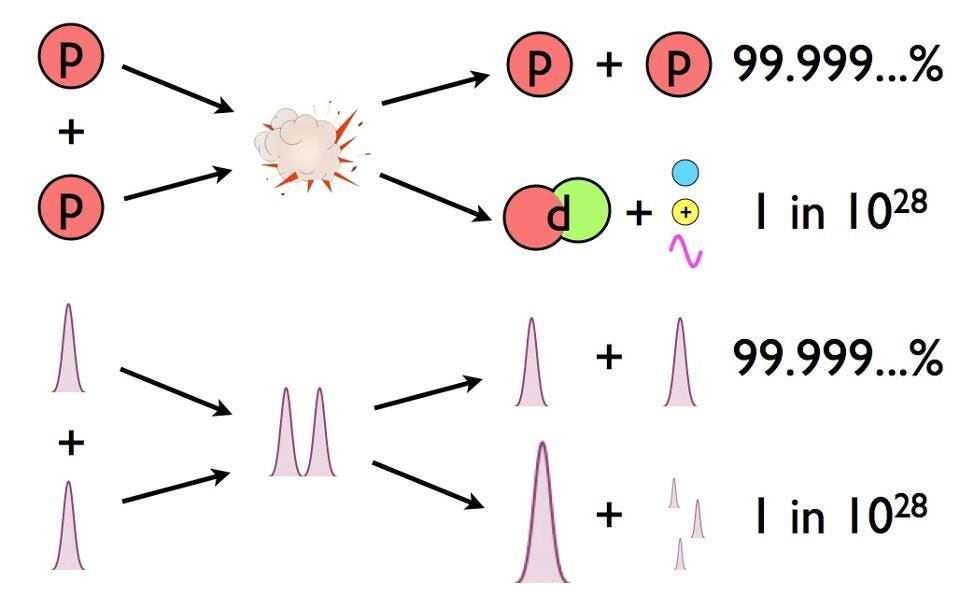 When two protons meet each other in the Sun, their wavefunctions overlap, allowing the temporary creation of helium-2: a diproton. Almost always, it simply splits back into two protons, but on very rare occasions, a stable deuteron (hydrogen-2) is produced, due to both quantum tunneling and the weak interaction.E. SIEGEL / BEYOND THE GALAXY

There’s always a chance that these particles can undergo quantum tunneling, and wind up in a more stable bound state (e.g., deuterium) that causes the release of this fusion energy, and allows the chain reaction to proceed. Even though the probability of quantum tunneling is very small for any particular proton-proton interaction, somewhere on the order of 1-in-1028, or the same as your odds of winning the Powerball lottery three times in a row, that ultra-rare interaction is enough to explain the entirety of where the Sun’s energy (and almost every star’s energy) comes from. 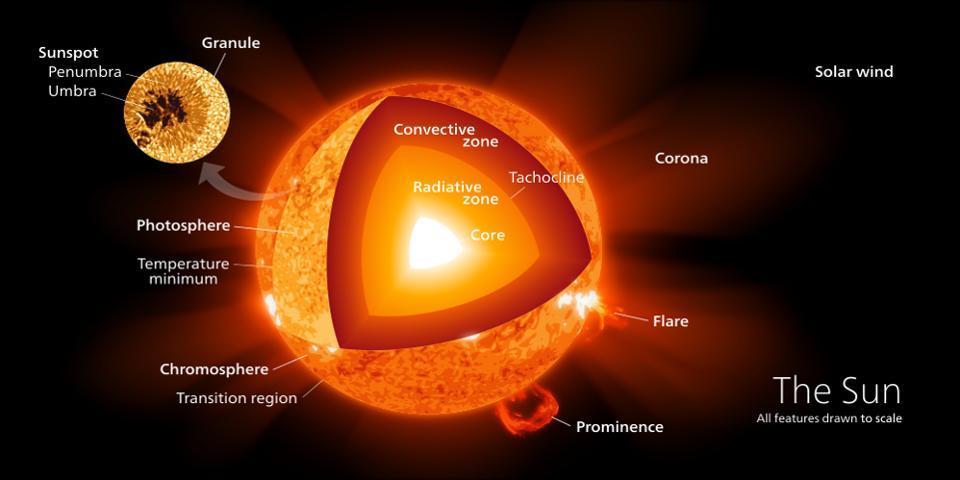 This cutaway showcases the various regions of the surface and interior of the Sun, including the core, which is where nuclear fusion occurs. As time goes on, the helium-containing region in the core expands and the maximum temperature increases, causing the Sun’s energy output to increase.WIKIMEDIA COMMONS USER KELVINSONG

At the levels of the individual quarks, the most difficult step is to fuse two protons into that deuterium nucleus, which is better known as a deuteron. The reason this is hard is because a deuteron isn’t made of two protons at all, but rather a proton and neutron fused together. A deuteron contains three up quarks and three down quarks; two protons contain four up quarks and two down quarks. The math is all wrong.

In order to get there, the quantum tunneling that takes place needs to undergo a weak interaction: converting an up quark into a down quark, which requires:

This can only happen through the weak nuclear force, which is oddly enough responsible for controlling the timescale of fusion reactions in practically all stars, including our Sun. The non-zero rarity of this occurring, on the order of 1-in-1028 for each proton-proton interaction in the Sun, is why the Sun shines at all. 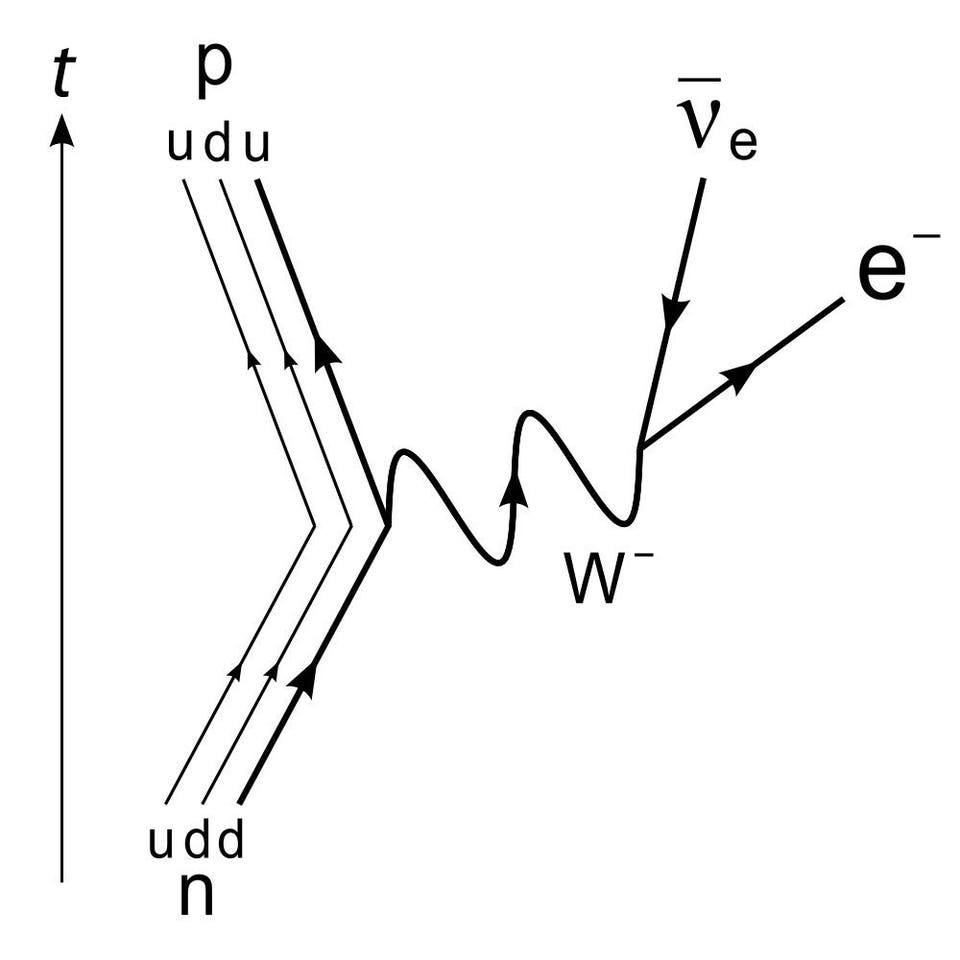 Under normal. low-energy conditions, a free neutron will decay into a proton by a weak interaction, where time flows in the upward direction, as shown here. At high enough energies, there’s a chance this reaction can run backwards: where a proton and either a positron or a neutrino can interact to produce a neutron, meaning that a proton-proton interaction has a chance to produce a deuteron. This is how that first critical step takes place for fusion inside the Sun.JOEL HOLDSWORTH

If it weren’t for the quantum nature of every particle in the Universe, and the fact that their positions are described by wavefunctions with an inherent quantum uncertainty to their position, this overlap that enables nuclear fusion to occur would never have happened. The overwhelming majority of today’s stars in the Universe would never have ignited, including our own. Rather than a world and a sky alight with the nuclear fires burning across the cosmos, our Universe would be desolate and frozen, with the vast majority of stars and solar systems unlit by anything other than a cold, rare, distant starlight.

It’s the power of quantum mechanics that allows the Sun to shine. In a fundamental way, if God didn’t play dice with the Universe, we’d never win the Powerball three times in a row. Yet with this randomness, we win all the time, to the continuous tune of hundreds of Yottawatts of power, and here we are.