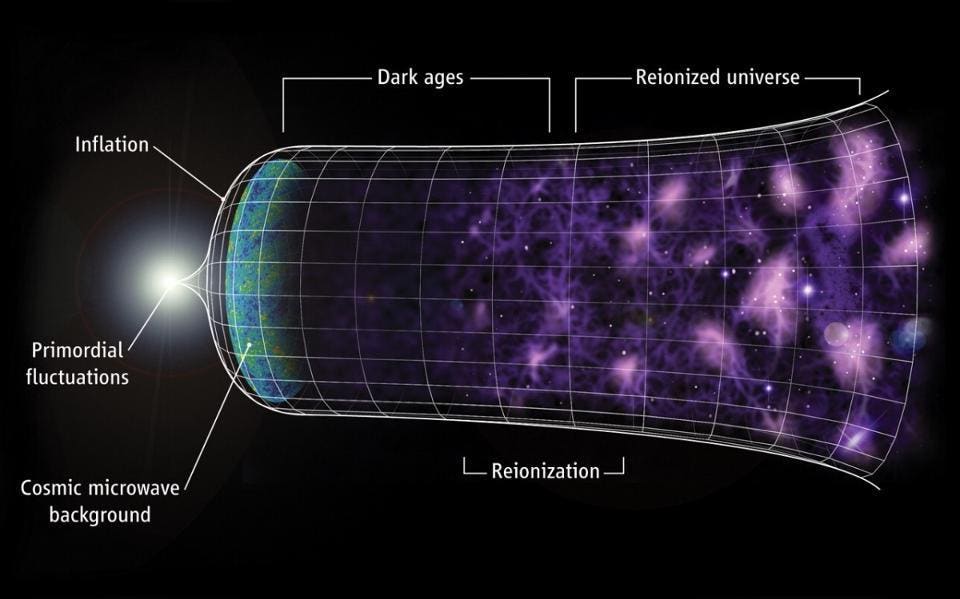 The expanding Universe, full of galaxies and the complex structure we observe today, arose from a smaller, hotter, denser, more uniform state. It took thousands of scientists working for hundreds of years for us to arrive at this picture, and yet the lack of a consensus on what the expansion rate actually is tells us that either something is dreadfully wrong, or we have an unidentified error somewhere.C. FAUCHER-GIGUÈRE, A. LIDZ, AND L. HERNQUIST, SCIENCE 319, 5859 (47)

The Universe is expanding, and every scientist in the field agrees with that. The observations overwhelmingly support that straightforward conclusion, and every alternative has failed to match its successes since the late 1920s. But in scientific endeavors, success cannot simply be qualitative; we need to understand, measure, and quantify the Universe’s expansion. We need to know how much the Universe is expanding by.

For generations, astronomers, astrophysicists and cosmologists attempted to refine our measurements of the rate of the Universe’s expansion: the Hubble constant. After many decades of debates, the Hubble Space Telescope key project appeared to solve the issue: 72 km/s/Mpc, with just a 10% uncertainty. But now, 17 years later, scientists can’t agree. One claims ~67 km/s/Mpc; the other claims ~73 km/s/Mpc, and the errors do not overlap. Something, or someone, is wrong, and we cannot figure out where.

The farther a galaxy is, the faster it expands away from us, and the more its light appears redshifted. A galaxy moving with the expanding Universe will be even a greater number of light years away, today, than the number of years (multiplied by the speed of light) that it took the light emitted from it to reach us. But how fast the Universe is expanding is something that astronomers using different techniques cannot agree on.LARRY MCNISH OF RASC CALGARY CENTER

The reason this is such a problem is because we have two major ways of measuring the expansion rate of the Universe: through the cosmic distance ladder and through looking at the signals originating from the earliest moments of the Big Bang. The two methods are extremely different.

The first method seems to be giving the higher figure of ~73 km/s/Mpc, consistently, while the second gives ~67 km/s/Mpc. 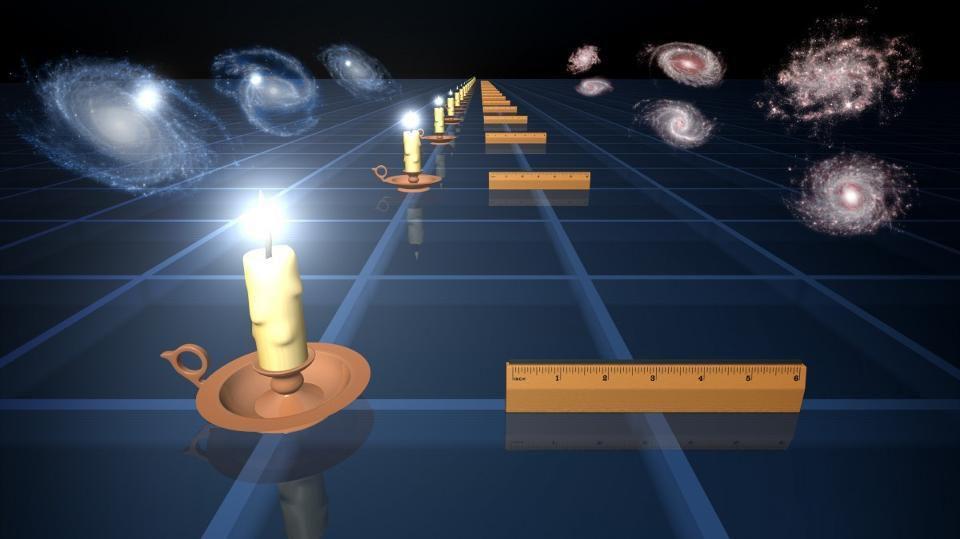 Standard candles (L) and standard rulers (R) are two different techniques astronomers use to measure the expansion of space at various times/distances in the past. Based on how quantities like luminosity or angular size change with distance, we can infer the expansion history of the Universe. Using the candle method is part of the distance ladder, yielding 73 km/s/Mpc. Using the ruler is part of the early signal method, yielding 67 km/s/Mpc. These values are inconsistent.NASA / JPL-CALTECH

This should trouble you deeply. If we understand the way the Universe works correctly, then every method we use to measure it should deliver the same properties and the same story about the cosmos we inhabit. Whether we use red giant stars or blue variable stars, rotating spiral galaxies or face-on spirals with fluctuating brightness, swarming elliptical galaxies or Type Ia supernovae, or the Cosmic Microwave Background or galaxy correlations, we should get an answer that’s consistent with a Universe having the same properties. 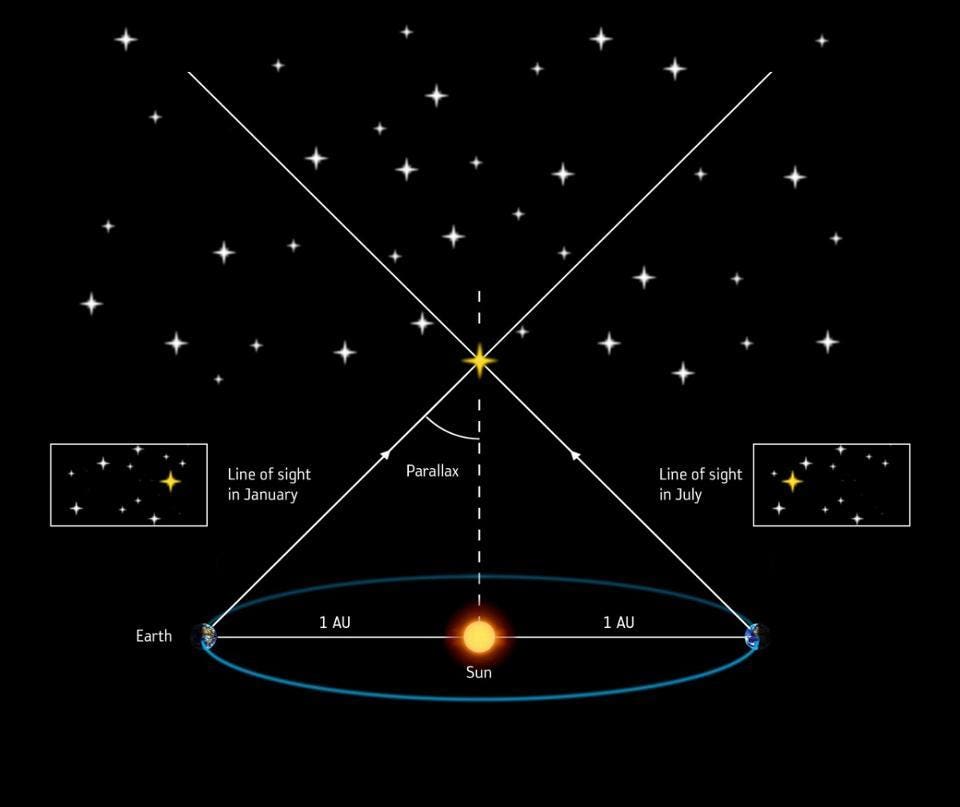 The parallax method, employed since telescopes became good enough in the 1800s, involves noting the apparent change in position of a nearby star relative to the more distant, background ones. There may be biases in this method due to the presence of masses we have not appropriately accounted for.ESA/ATG MEDIALAB

1.) The distance ladder: start with the stars in our own galaxy. Measure their distance using parallax, which is how a star’s apparent position shifts over the course of an Earth year. As our world moves around the Sun, the apparent position of a nearby star will shift relative to the background ones; the amount of shift tells us the star’s distance.

Some of those stars will be Cepheid variable stars, which display a specific relationship between their luminosity (intrinsic brightness) and their period of pulsation: Leavitt’s Law. Cepheids are abundant within our own galaxy, but can also be seen in distant galaxies. 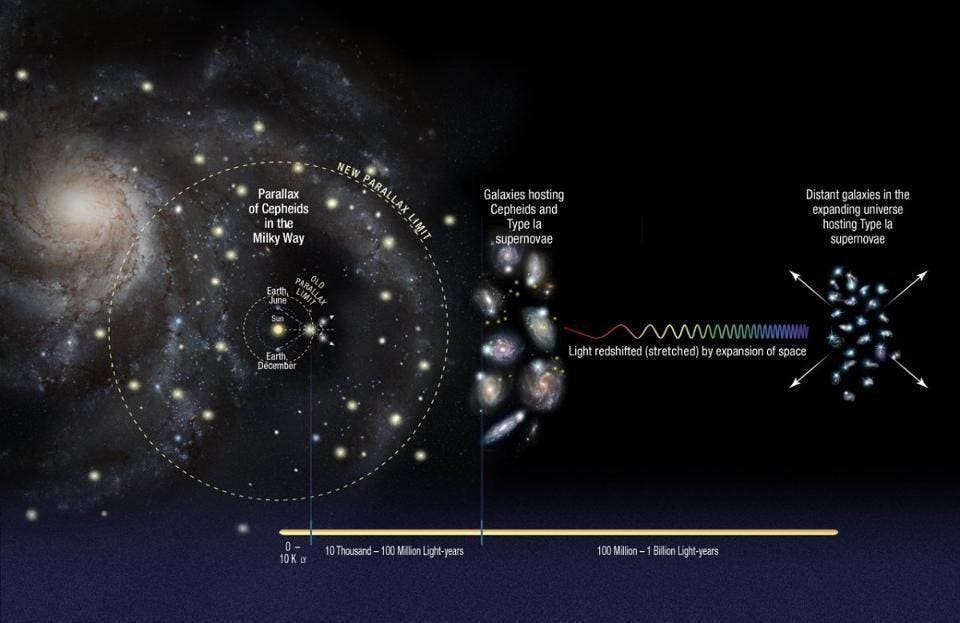 The construction of the cosmic distance ladder involves going from our Solar System to the stars to nearby galaxies to distant ones. Each “step” carries along its own uncertainties, especially the Cepheid variable and supernovae steps; it also would be biased towards higher or lower values if we lived in an underdense or overdense region.NASA, ESA, A. FEILD (STSCI), AND A. RIESS (STSCI/JHU)

And in some of these distant, Cepheid-containing galaxies, there are also Type Ia supernovae which have been observed to occur. These supernovae can be observed all throughout the Universe, from right here in our cosmic backyard to galaxies located many billions or even tens of billions of light years away. 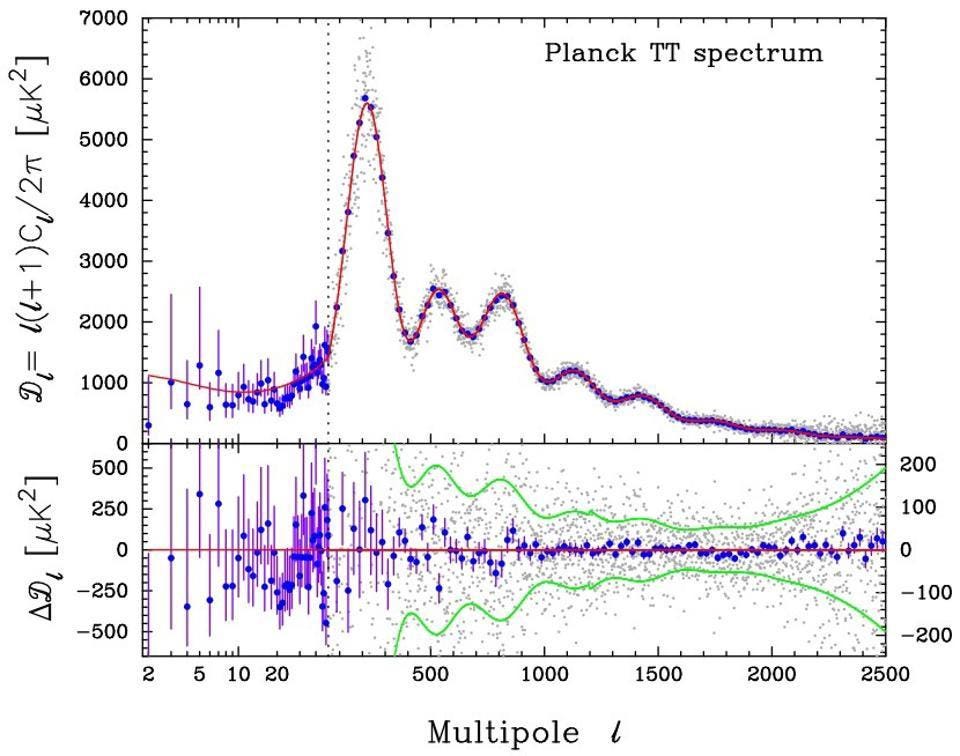 The pattern of acoustic peaks observed in the CMB from the Planck satellite effectively rules out a Universe that doesn’t contain dark matter, and also tightly constrains many other cosmological parameters.P.A.R. ADE ET AL. AND THE PLANCK COLLABORATION (2015)

2.) The early signals: alternatively, start with the Big Bang, and the knowledge that our Universe is filled with dark matter, dark energy, normal matter, neutrinos, and radiation.

The masses are going to attract one another and attempt to undergo gravitational collapse, with the denser regions attracting more and more of the surrounding matter. But the change in gravity leads to a pressure change, causing radiation to stream out of these regions, working to suppress gravitational growth.

The fun thing is this: the normal matter has an interaction cross-section with the radiation, but the dark matter doesn’t. This leads to a specific “acoustic pattern” where normal matter experiences these bounces and compressions from the radiation. 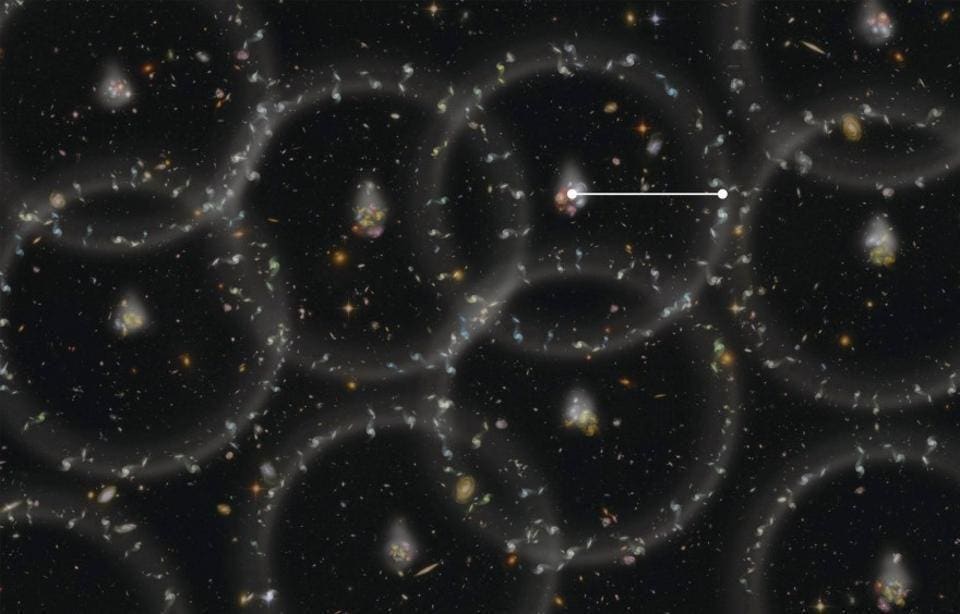 An illustration of clustering patterns due to Baryon Acoustic Oscillations, where the likelihood of finding a galaxy at a certain distance from any other galaxy is governed by the relationship between dark matter and normal matter. As the Universe expands, this characteristic distance expands as well, allowing us to measure the Hubble constant, the dark matter density, and even the scalar spectral index. The results agree with the CMB data, and a Universe made up of 27% dark matter, as opposed to 5% normal matter.ZOSIA ROSTOMIAN

This shows up with a particular set of peaks in the temperature fluctuations of the Cosmic Microwave Background, and a specific distance scale for where you’re more likely to find a galaxy than either closer or farther away. As the Universe expands, these acoustic scales change, which should lead to signals in both the Cosmic Microwave Background (two images up) and the scales at which galaxies cluster (one image up).

By measuring what these scales are and how they change with distance/redshift, we can also get an expansion rate for the Universe. While the distance ladder method gives a rate of about 73 ± 2 km/s/Mpc, both of these early signal methods give 67 ± 1 km/s/Mpc. The numbers are different, and they don’t overlap. 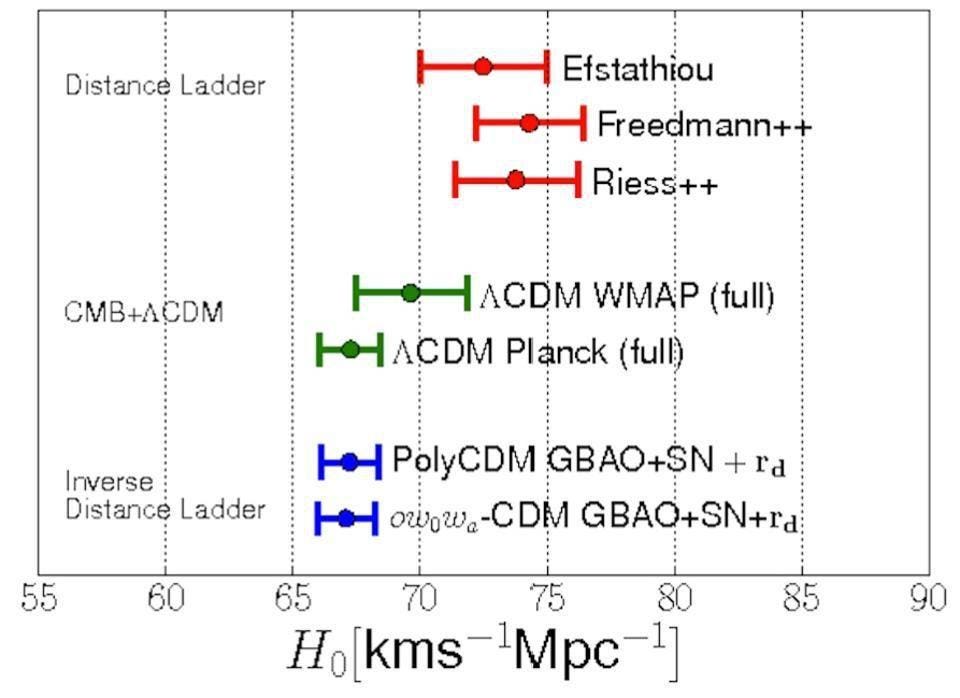 But these possibilities are the fantastic, spectacular, sensational ones. They might get the overwhelming majority of the press and prestige, as they’re imaginative and clever. But there’s also a much more mundane possibility that is far more likely: the Universe is simply the same everywhere, and one of the measurement techniques is inherently biased. 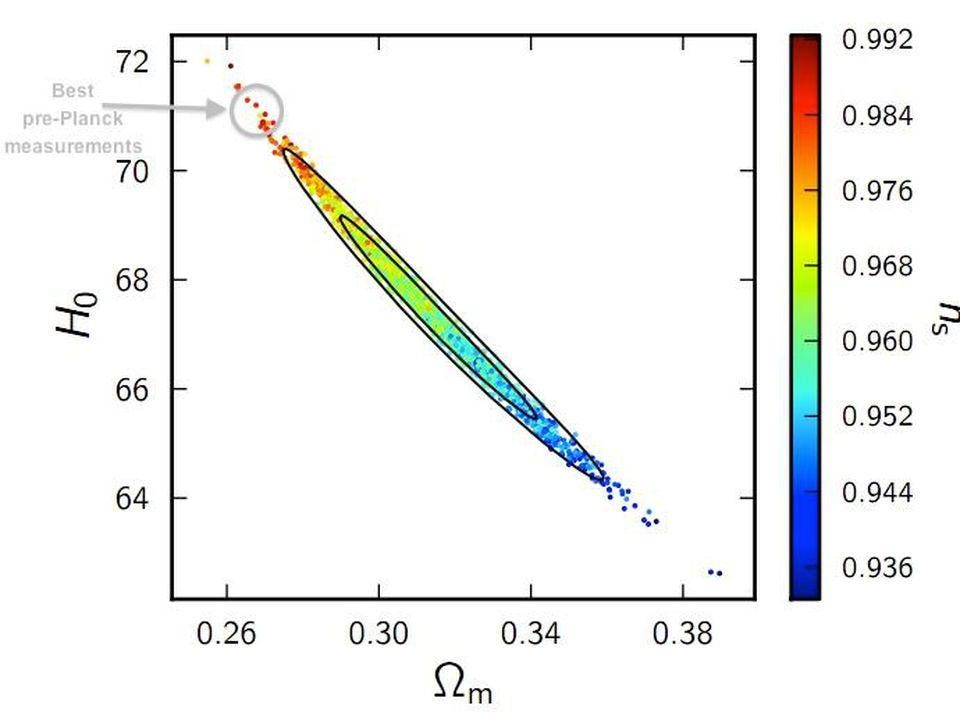 Before Planck, the best-fit to the data indicated a Hubble parameter of approximately 71 km/s/Mpc, but a value of approximately 70 or above would now be too great for both the dark matter density (x-axis) we’ve seen via other means and the scalar spectral index (right side of the y-axis) that we require for the large-scale structure of the Universe to make sense.P.A.R. ADE ET AL. AND THE PLANCK COLLABORATION (2015)

It’s hard to identify the potential biases in the early signal methods, because the measurements from WMAP, Planck, and the Sloan Digital Sky Survey are so precise. In the cosmic microwave background, for example, we have measured very well the matter density of the Universe (about 32% ± 2%) and the scalar spectral index (0.968 ± 0.010). With those measurements in place, it’s very difficult to get a figure for the Hubble constant that’s greater than about 69 km/s/Mpc, which is really the upper limit.

There may be errors there that bias us, but we have a hard time enumerating what they could be. 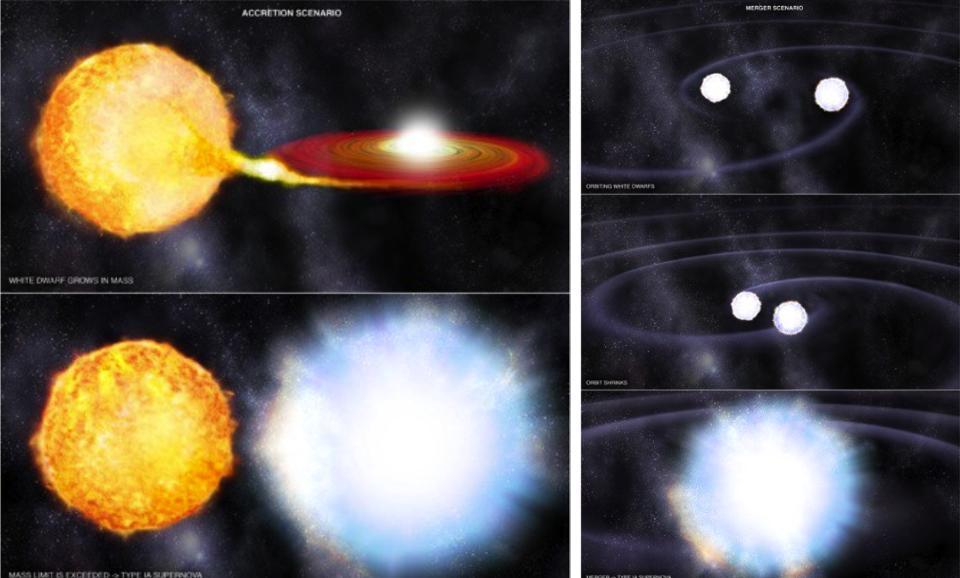 Two different ways to make a Type Ia supernova: the accretion scenario (L) and the merger scenario (R). It is not yet known which of these two mechanisms is more common in the creation of Type Ia supernova events, or if there is an undiscovered component to these explosions.NASA / CXC / M. WEISS

For the distance ladder method, however, they’re plentiful:

The discrepancy between these two different ways of measuring the expanding Universe may simply be a reflection of our overconfidence in how small our errors actually are.

The 3D reconstruction of 120,000 galaxies and their clustering properties, inferred from their redshift and large-scale structure formation. The data from these surveys allows us to infer the expansion rate of the Universe, which is consistent with the CMB measurements but not with the distance ladder measurements.JEREMY TINKER AND THE SDSS-III COLLABORATION

The question of how quickly the Universe is expanding is one that has troubled astronomers and astrophysicists since we first expansion was occurring at all. It’s an incredible achievement that multiple, independent methods yield answers that are consistent to within 10%, but they don’t agree with each other, and that’s troubling.

If there’s an error in parallax, Cepheids, or supernovae, the expansion rate may truly be on the low end: 67 km/s/Mpc. If so, the Universe will fall into line when we identify our mistake. But if the Cosmic Microwave Background group is mistaken, and the expansion rate is closer to 73 km/s/Mpc, it foretells a crisis in modern cosmology. The Universe cannot have the dark matter density and initial fluctuations 73 km/s/Mpc would imply.

Either one team has made an unidentified mistake, or our conception of the Universe needs a revolution. I’m betting on the former.