The Biggest Myth About Black Holes 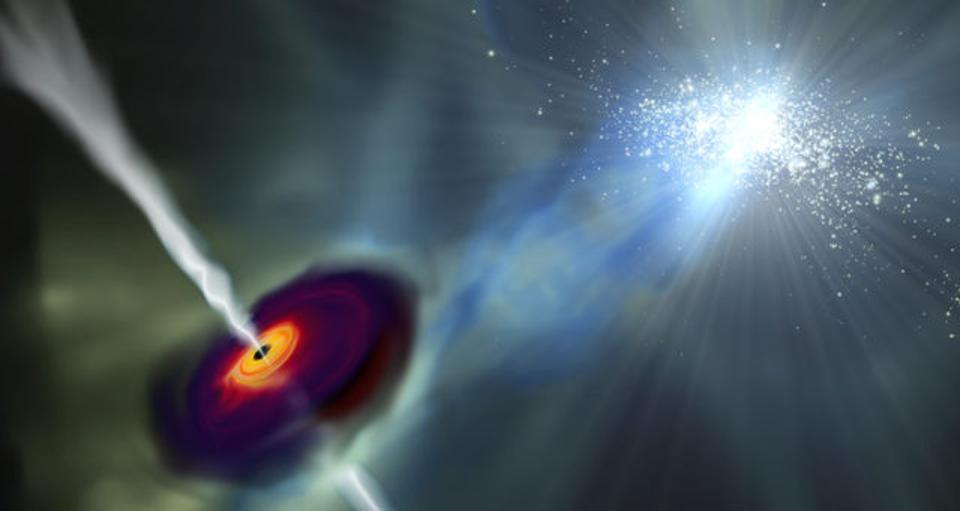 Black holes are regions of space where there’s so much mass in such a small volume that there exists an event horizon: a region from within which nothing, not even light, can escape. Yet this doesn’t necessarily mean that black holes suck matter in; they simply gravitate.J. WISE/GEORGIA INSTITUTE OF TECHNOLOGY AND J. REGAN/DUBLIN CITY UNIVERSITY

Black holes are some of the strangest, most wondrous objects in all the Universe. With huge amounts of mass concentrated into an extremely small volume, they inevitably collapse down to singularities, surrounded by event horizons from which nothing can escape. These are the densest objects in the entire Universe. Whenever anything comes too close to one, the forces from the black hole will tear it apart; when any matter, antimatter, or radiation crosses the event horizon, it simply falls down to the central singularity, growing the black hole and adding to its mass.

These properties about black holes are all true. But there’s an associated idea that’s absolute fiction: black holes suck surrounding matter into them. This couldn’t be further from the truth, and completely misrepresents how gravity works. The biggest myth about black holes is that they suck. Here’s the scientific truth. 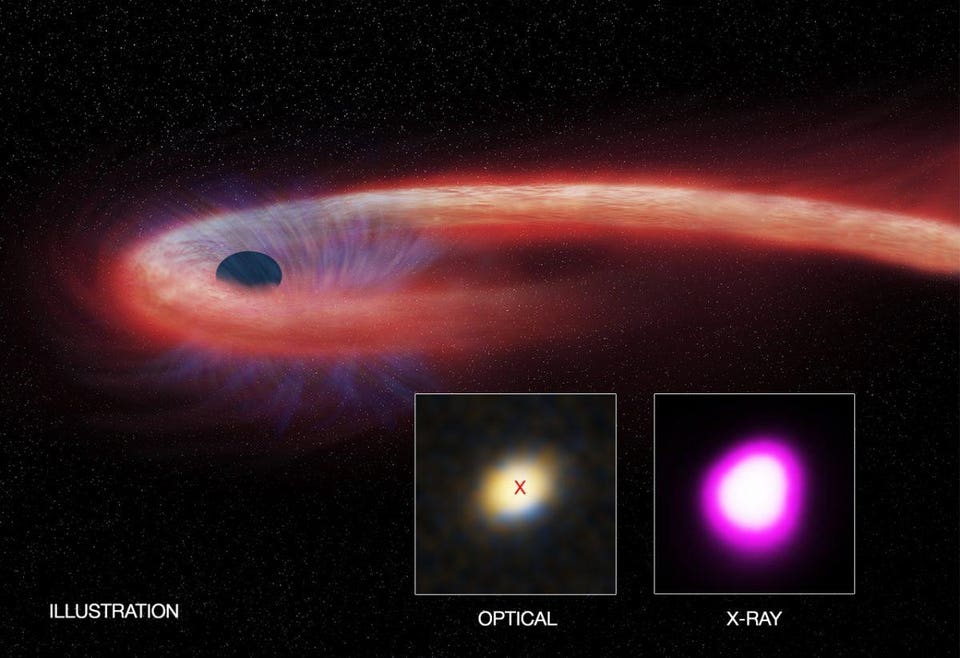 A black hole is famous for absorbing matter and having an event horizon from which nothing can escape,and for cannibalizing its neighbors. But there isn’t any ‘sucking’ going on to cause it, simply the disruption of matter and an occasional infall of material.X-RAY: NASA/CXC/UNH/D.LIN ET AL, OPTICAL: CFHT, ILLUSTRATION: NASA/CXC/M.WEISS 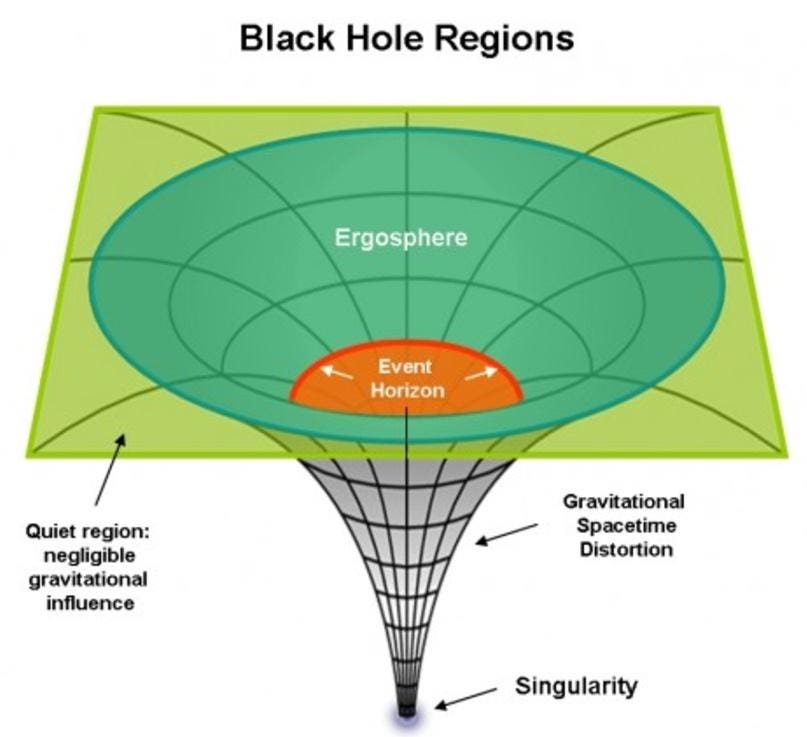 Once you cross the threshold to form a black hole, everything inside the event horizon crunches down to a singularity that is, at most, one-dimensional. No three-dimensional structures can survive intact.ASK THE VAN / UIUC PHYSICS DEPARTMENT

For objects outside the black hole, however, there’s still plenty of trouble. Because black holes are such massive objects, when you get close to one, you start to experience significant tidal forces. You might be most familiar with tidal forces from the Moon and how it interacts with Earth.

Sure, on average, you can treat the Moon as a point mass and the Earth as a point mass, separated by the relatively large distance of 380,000 kilometers or so. But in actuality, the Earth isn’t a point, but an object that occupies a real, given volume. Parts of the Earth will be closer to the Moon than others; parts will be farther away. The closer parts will experience a greater gravitational attraction than average; the more distant parts will experience a lesser attraction than average.

From anywhere on the surface of a physical object, there will be a force pulling it in the direction of an external gravitational mass. Different points along that object will experience slightly different forces, resulting in a net tidal force: the differences between the force on the individual points versus the average net force on the entire object.DEPARTMENT OF OCEANOGRAPHY, NAVAL POSTGRADUATE SCHOOL

But there’s more than just the fact that parts of the Earth are closer and parts are farther away from the Moon. Like all physical objects, the Earth is three-dimensional, which means the “top” and “bottom” areas of the Earth (from the Moon’s point of view) will get pulled inwards, towards the center of the Earth, relative to the portions located in the middle. 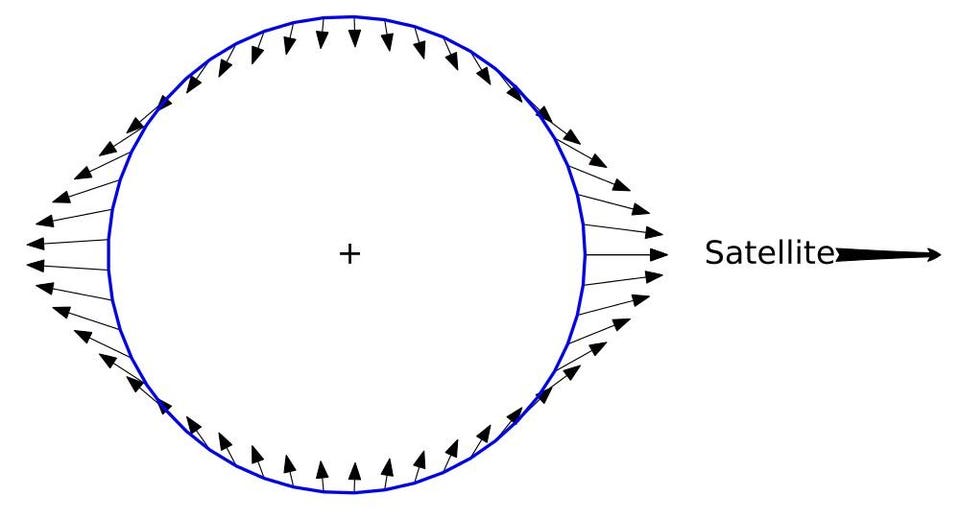 The force at the center of the object will equate to the average net force, while different points away from the center will experience differential net forces. This results in a ‘spaghettifying’ effect.KRISHNAVEDALA / WIKIMEDIA COMMONS

The closer you get to a massive object, the larger these tidal forces become; the tidal forces get larger even faster than the gravitational force does! Because black holes are both extremely massive and extremely compact, they generate the largest-known tidal forces in the Universe. This is why, as you approach a black hole, you find yourself getting “spaghettified,” or stretched into a thin, noodle-like shape.

Based on this, it’s easy to see why you’d expect black holes to suck you in: the closer you get to one, the stronger the attractive force of gravity gets and the stronger the tidal forces tearing you apart get. 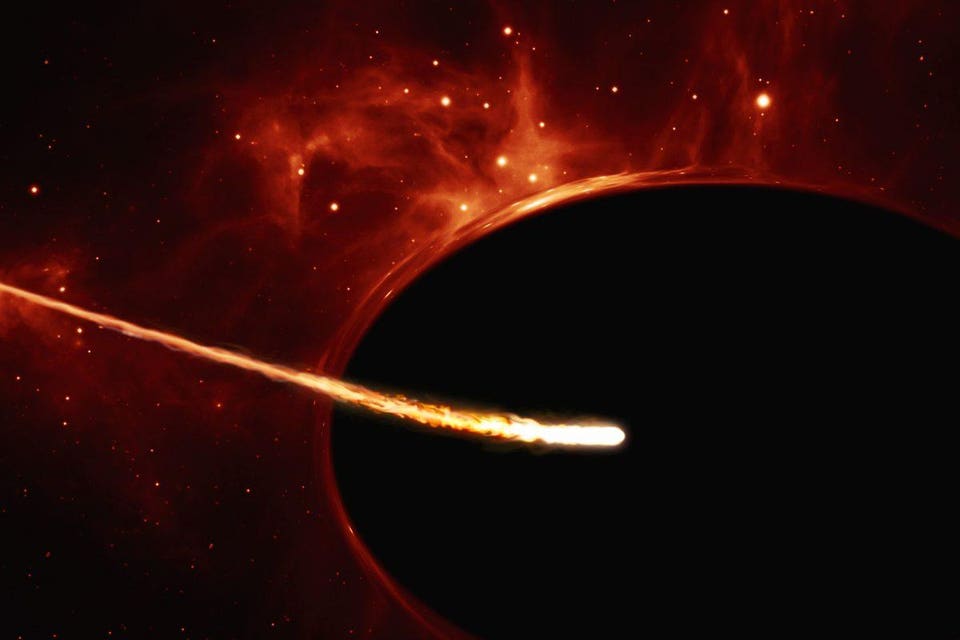 This artist’s impression depicts a Sun-like star being torn apart by tidal disruption as it nears a black hole. For an LHC-mass black hole, these forces are inconsequential, as they’re negligibly small, but for black holes like the type at our galaxy’s center, tidal forces close to the event horizon can be enormous.ESO, ESA/HUBBLE, M. KORNMESSER

Still, the idea that you’ll get sucked into a black hole remains a misconception, and a doozy of one at that. Every single particle that makes up an object affected by a black hole is still subject to the same laws of physics, including the gravitational curvature of spacetime generated by General Relativity.

While it’s true that the fabric of space is curved by the presence of mass, and that black holes offer the greatest concentration of mass anywhere in the Universe, it’s also true that the density of that mass doesn’t matter for how space is curved. If you were to replace the Sun with a white dwarf, neutron star, or black hole of the same exact mass, the gravitational force acting on Earth would be no different. It’s the total mass that curves the space around you; density has practically nothing to do with it. 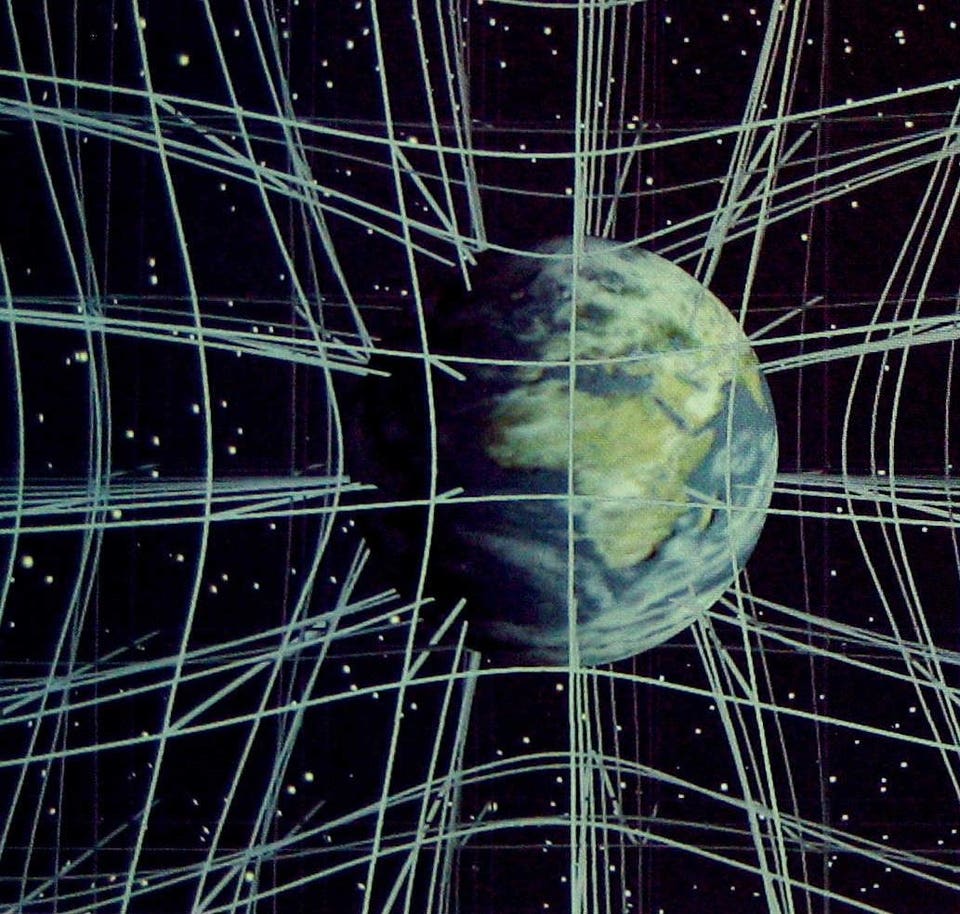 Instead of an empty, blank, three-dimensional grid, putting a mass down causes what would have been ‘straight’ lines to instead become curved by a specific amount. In General Relativity, we treat space and time as continuous, but all forms of energy, including but not limited to mass, contribute to spacetime curvature. If we were to replace Earth with a denser version, up to and including a singularity, the spacetime deformation shown here would be identical; only inside the Earth itself would a difference be notable.CHRISTOPHER VITALE OF NETWORKOLOGIES AND THE PRATT INSTITUTE

From a distance, a black hole is just like any other mass in the Universe. It’s only when you get extremely close — within a few Schwarzschild radii — that you start noticing the departures from Newtonian gravity. Still, the black hole simply acts as an attractor, and objects approaching it will make the same orbits they normally would: a circle, ellipse, parabola or hyperbola, to a very good approximation.

Because of the tidal forces, approaching objects might get torn apart, and because of the matter that’s accreted around the black hole in the form of an accretion disk, there might be additional effects present: magnetic fields and friction and heating. Some of the matter, given these additional interactions, is likely to be slowed down and eventually swallowed by the black hole, but the overwhelming majority would still escape. 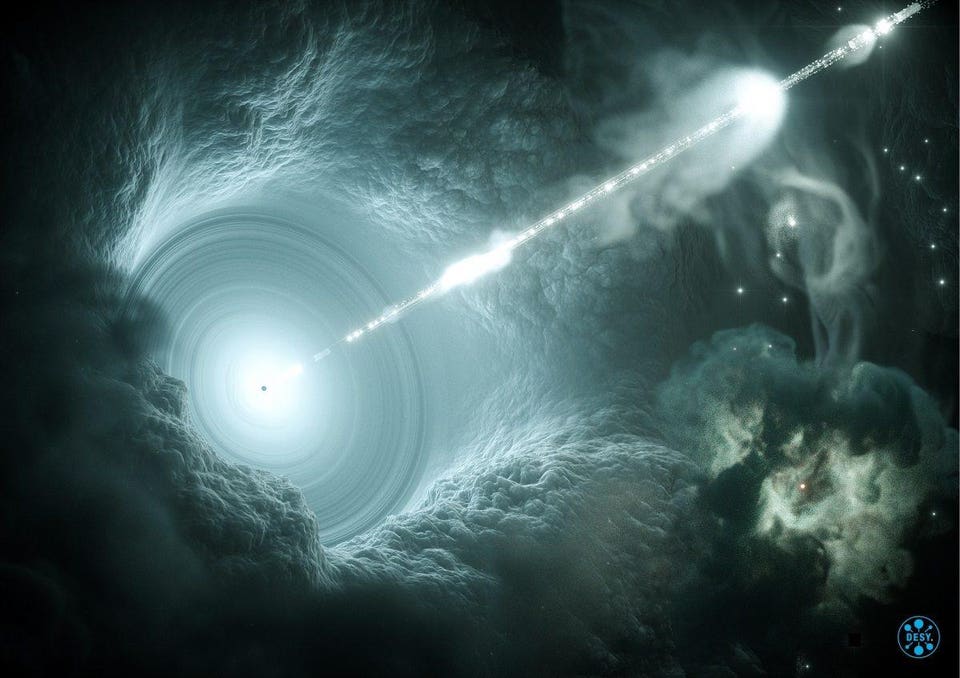 Artist’s impression of an active galactic nucleus. The supermassive black hole at the center of the accretion disk sends a narrow high-energy jet of matter into space, perpendicular to the disc. A blazar about 4 billion light years away is the origin of many of the highest-energy cosmic rays and neutrinos. Only matter from outside the black hole can leave the black hole; matter from inside the event horizon can never escape.DESY, SCIENCE COMMUNICATION LAB

The fact of the matter is that black holes aren’t sucking anything in; there’s no force that a black hole exerts that a normal object (like a moon, planet, or star) doesn’t exert. In the end, it’s all just gravity. The biggest difference is that black holes are denser than most objects, occupying a much smaller volume of space, and capable of being far more massive than any other single object. Saturn might be just fine orbiting our Sun, but if you were to replace the Sun with the black hole at the center of the Milky Way — a black hole that’s some 4,000,000 times as massive as the Sun — the tidal forces would be strong enough to break Saturn up into an enormous ring, where it would become part of the black hole’s accretion disk. Given enough friction, heating, and acceleration in the presence of the gravitational, electric, and magnetic fields that all the matter generates, eventually it would fall inside and get swallowed. 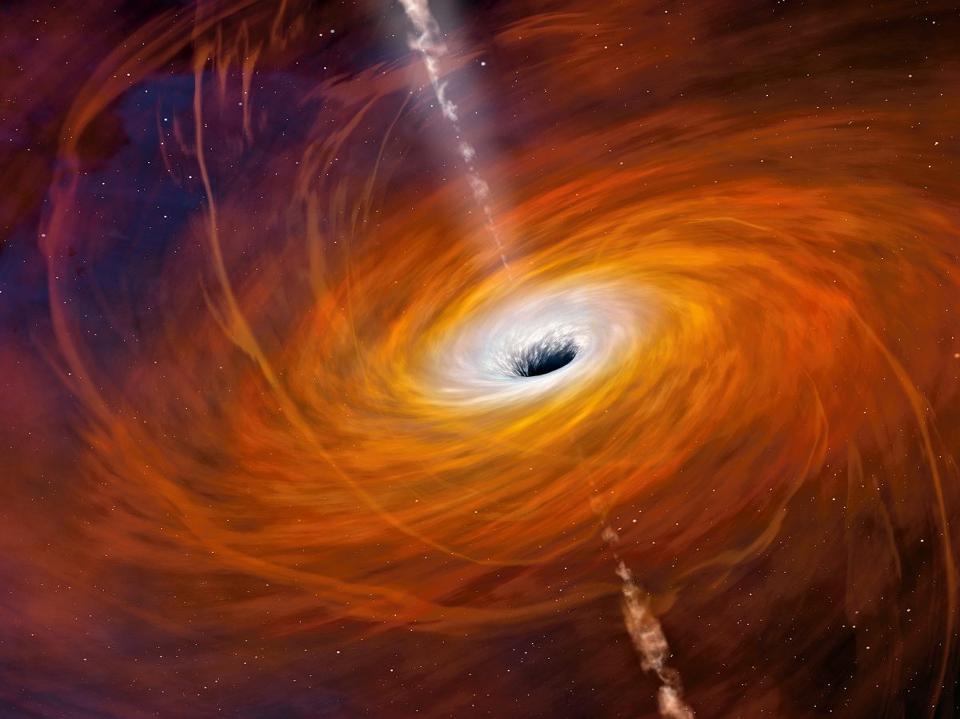 An illustration of an active black hole, one that accretes matter and accelerates a portion of it outwards in two perpendicular jets, is an outstanding descriptor of how quasars work. The matter that falls into a black hole, of any variety, will be responsible for additional growth in both mass and event-horizon-size for the black hole. Despite all the misconceptions out there, however, there is no ‘sucking in’ of external matter.MARK A. GARLICK

Black holes only appear to suck matter in because they’re so massive, and the combination of tidal forces and the matter already present around the black hole can tear external objects apart, where a certain fraction of torn-apart particles will experience enough of a drag force to be funneled into the accretion disk and eventually into the black hole itself. But black holes will be messy eaters; the overwhelming majority of matter that passes close to a black hole will be spit back out in some form or another. It’s only the small portion that falls inside the event horizon that will ever cause it to grow. 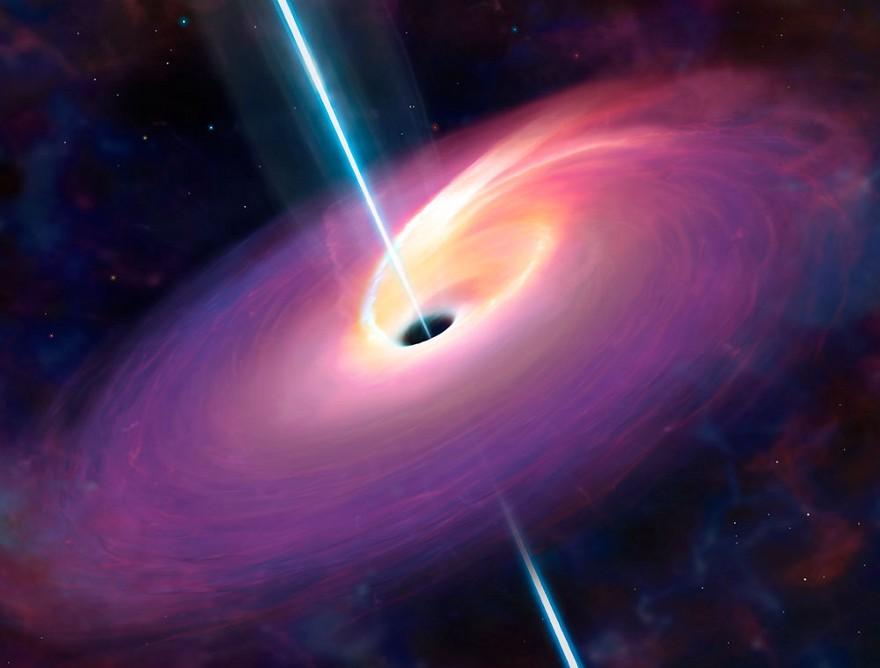 A black hole feeding off of an accretion disk. It’s friction, heating, and the interplay of charged particles in motion creating electromagnetic forces that can funnel mass inside the event horizon. But at no point does a black hole exert a sucking force; just a standard, run-of-the-mill gravitational one.MARK GARLICK (UNIVERSITY OF WARWICK)

If we replaced every mass in the Universe with an equivalent-mass black hole, and removed all the frictional material like accretion disks, very little would get sucked in at all. The only friction a particle would experience is due to its emission of gravitational radiation as it moves through the curved spacetime generated by the black hole. Only the material that formed interior to three times the event horizon radius — interior to the innermost stable circular orbit (ISCO) in relativity — would inexorably get “sucked” in, due to the behavior of Einstein’s theory itself. Compared to what actually falls into the event horizon in our physical reality, these effects are negligible.

In the end, we’d only have the force of gravity, and the curved spacetime that would result from the presence of these masses. The idea that black holes suck anything in is the biggest myth about them. They grow due to gravitation, and nothing more. In this Universe, that’s more than enough.