Top 10 Highlights Of What 2019 Will Hold For Science 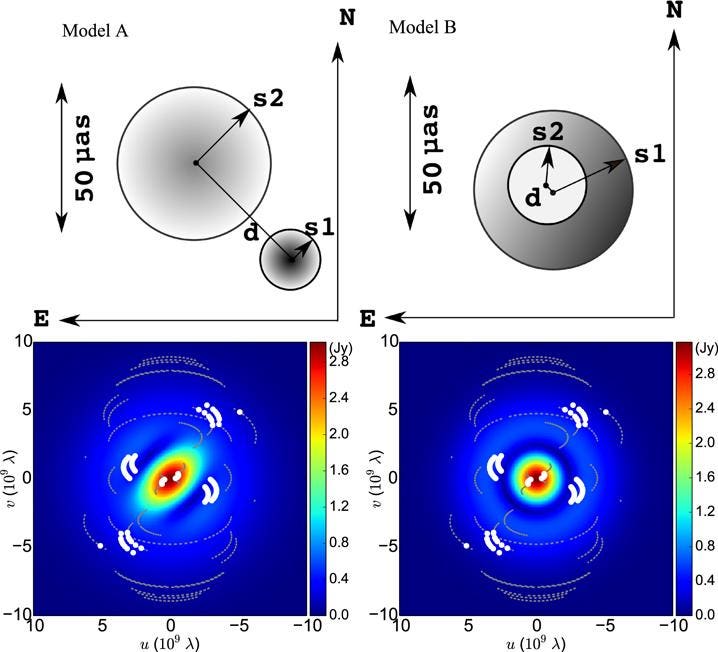 Two of the possible models that can successfully fit the Event Horizon Telescope data thus far, as of earlier in 2018. Both show an off-center, asymmetric event horizon that’s enlarged versus the Schwarzschild radius, consistent with the predictions of Einstein’s General Relativity. A full image has not yet been released to the general public, but is expected in 2019.R.-S. LU ET AL, APJ 859, 1

Every year, unexpected scientific discoveries challenge what we know. 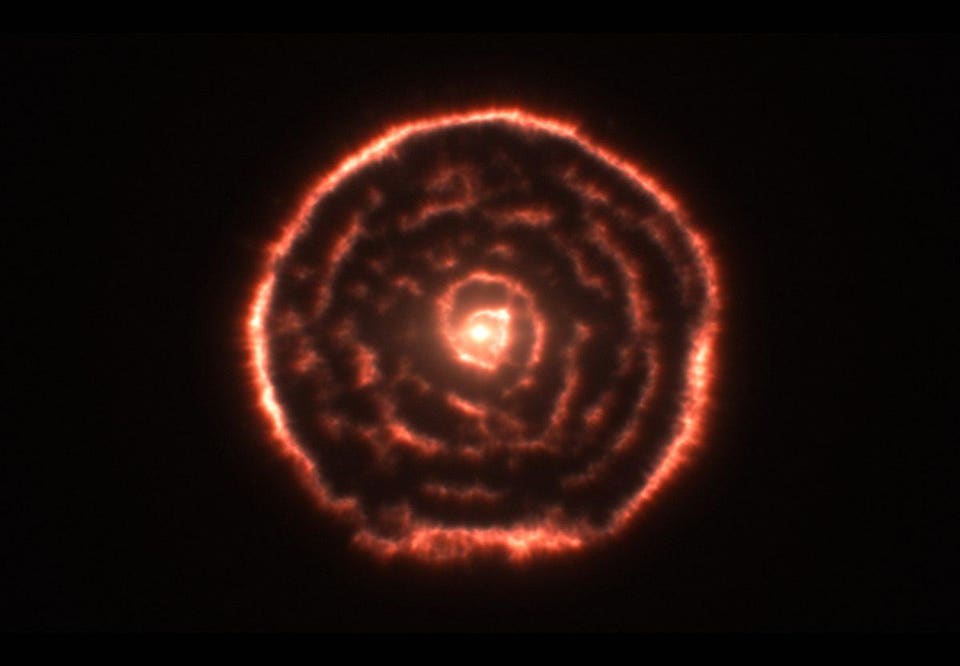 Observations using the Atacama Large Millimeter/submillimeter Array (ALMA) have revealed an unexpected spiral structure in the material around the old star R Sculptoris. This feature has never been seen before and is probably caused by a hidden companion star orbiting the star, one of the many unexpected scientific results to emerge from ALMA.ALMA (ESO/NAOJ/NRAO)/M. MAERCKER ET AL.

But there’s plenty to anticipate that’s fully expected, too. 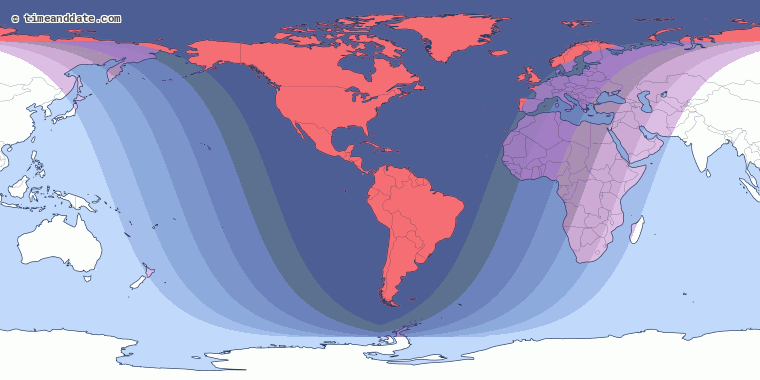 The area shown in red, here, will get to observe the total lunar eclipse of 2019 in January from Earth. This includes everyone in North and South America with clear skies.TIMEANDDATE.COM

Here are 10 surefire highlights coming in 2019. 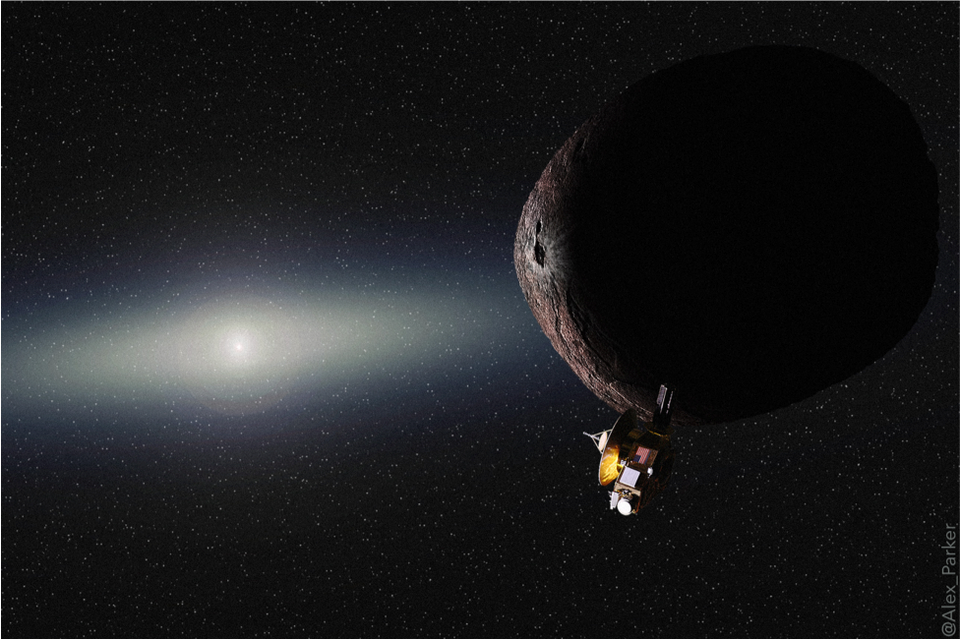 On January 1st, 2019, shortly after the switch into the new year, New Horizons will make its close pass of Ultima Thule. Its nature, appearance, and composition will all be determined in 2019.NASA/JHUAPL/SWRI/ALEX PARKER 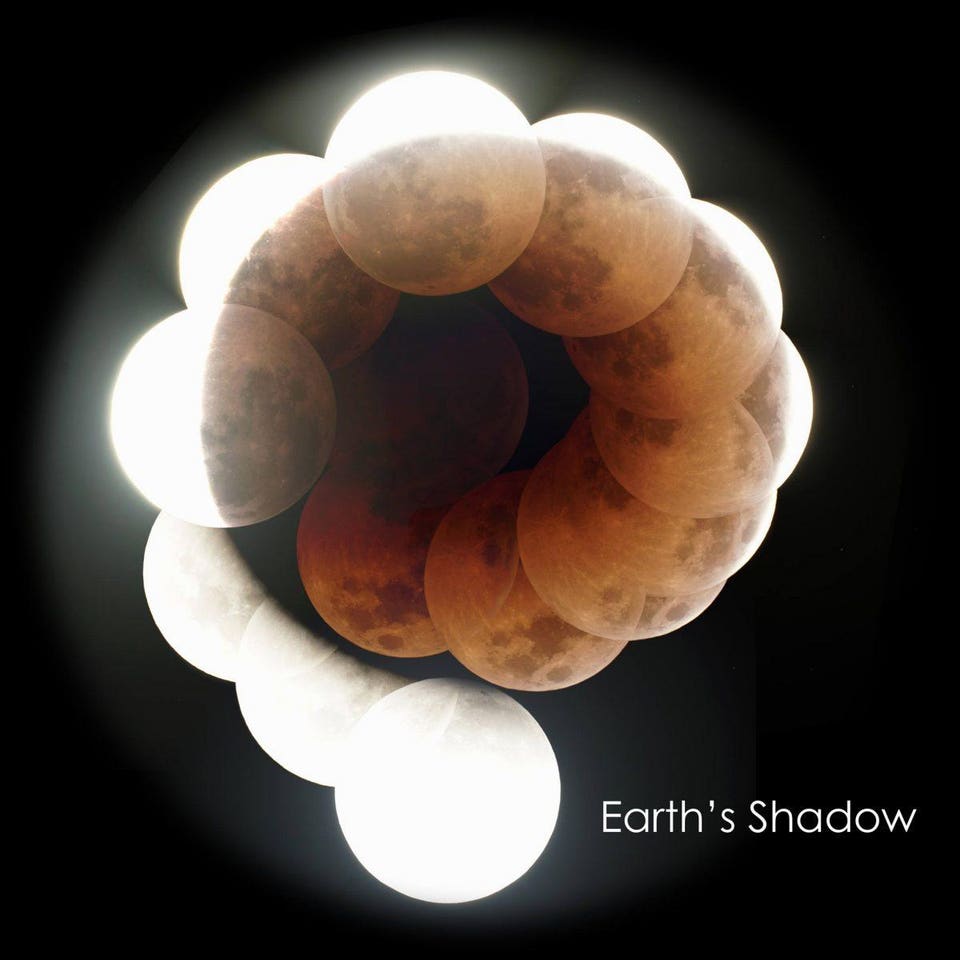 By digitally stitching together a series of images during the July 27th, 2018 lunar eclipse, Tom Harradine was able to demonstrate the relative size of Earth’s shadow on the Moon to the size of the apogee Moon itself. The January 20/21, 2019 eclipse will occur with the moon at perigee, resulting in a different-sized apparent shadow.TOM HARRADINE, VIA FACEBOOK, WITH PERMISSION

9.) A supermoon lunar eclipse, visible on January 20/21, includes all of North and South America. 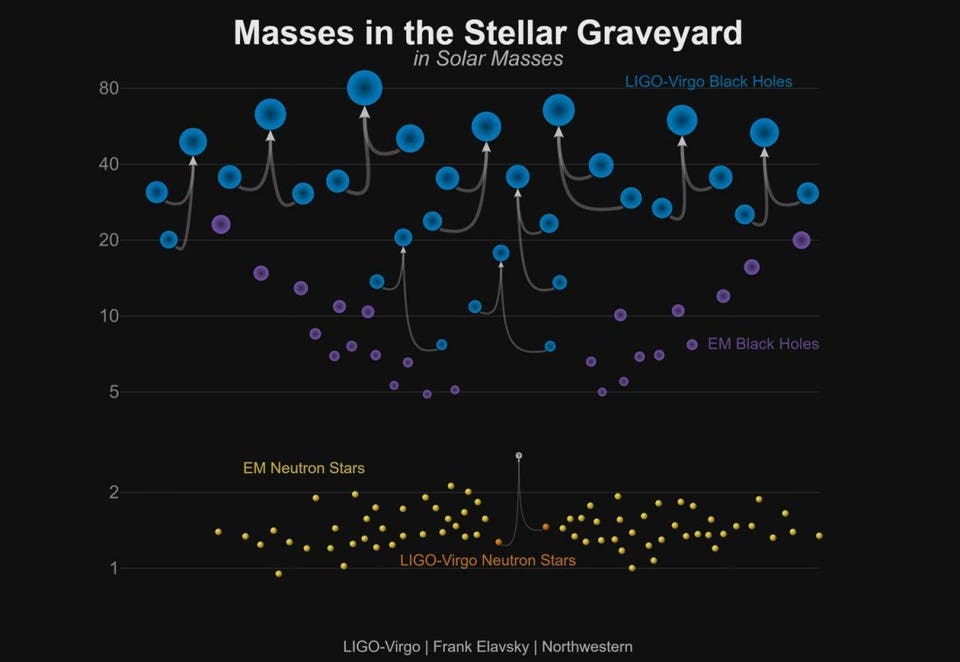 LIGO and Virgo have discovered a new population of black holes with masses that are larger than what had been seen before with X-ray studies alone (purple). This plot shows the masses of all ten confident binary black hole mergers detected by LIGO/Virgo (blue), along with the one neutron star-neutron star merger seen (orange). LIGO/Virgo, with the upgrade in sensitivity, should detect multiple mergers every week.LIGO/VIRGO/NORTHWESTERN UNIV./FRANK ELAVSKY 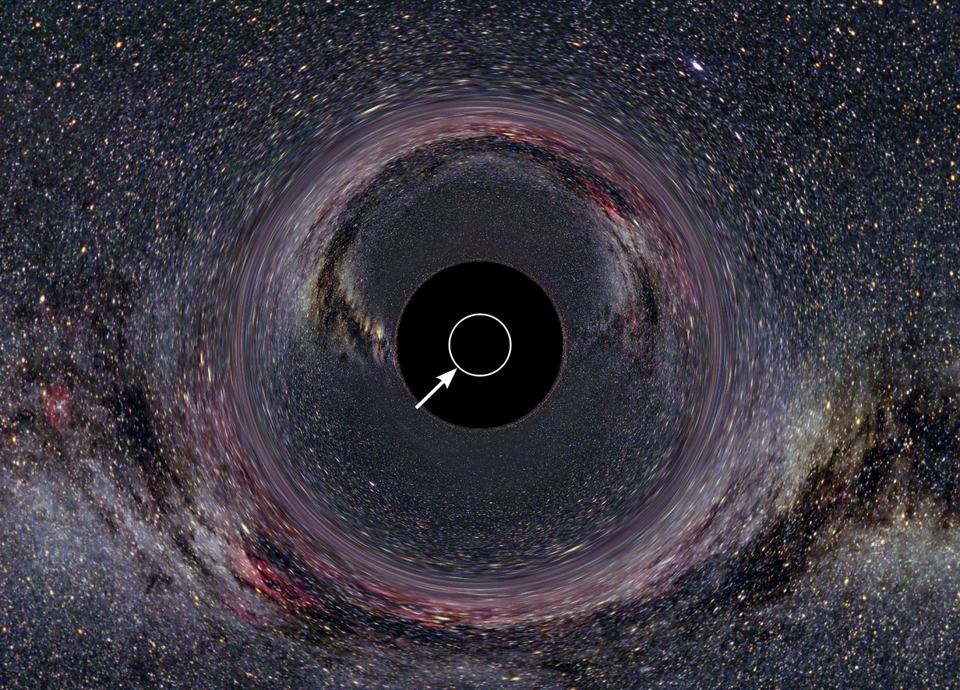 The black hole at the center of our Milky Way, simulated here, is the largest one seen from Earth’s perspective. The Event Horizon Telescope should, in 2019, come out with their first image of what this central black hole’s event horizon looks like, while the one at the center of M87, the second largest, ought to be visible as well with this technology. The white circle represents the Schwarzschild radius of the black hole.UTE KRAUS, PHYSICS EDUCATION GROUP KRAUS, UNIVERSITÄT HILDESHEIM; BACKGROUND: AXEL MELLINGER

7.) The Event Horizon Telescope should release the first (and second) images of a black hole’s event horizon.

6.) The Parker Solar Probe will make two close approaches to the Sun, teaching us how stars work in situ.

SpaceX (left) and Boeing (right) capsules are both slated to launch to the ISS in 2019, carrying crew members and marking the first time that a US-launched rocket carried humans into space since the Space Shuttle Atlantis’ final flight in 2011.NASA

5.) The United States will launch their first crewed missions to space since 2011’s final Space Shuttle, via SpaceX and Boeing. 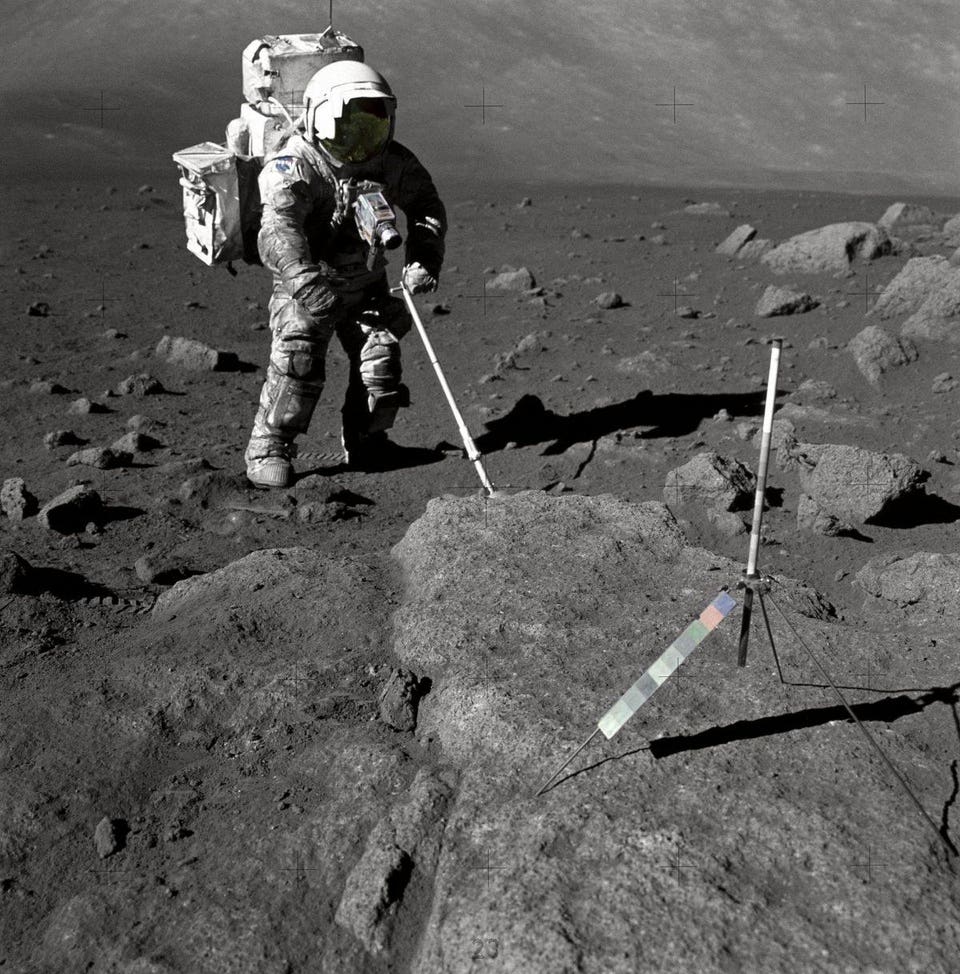 Harrison Schmitt, one of the Apollo 17 astronauts, uses a thin metal pole to get a core sample on the surface of the Moon. Rocks brought back from the Apollo missions taught us tremendous amounts about the Moon’s geological history, including from the region shown here: Taurus-Littrow Valley. There have been no sample return missions, crewed or uncrewed, since 1976.NASA / APOLLO 17

4.) China’s Chang’e-5 will become the first mission since 1976 to collect and return samples from the Moon.

The planned timeline of the Large Hadron Collider’s runs and upgrades. Note that only a few percent of the total anticipated data is currently in hand; approximately 50-fold more is expected over the lifetime of the LHC.HILUMI LHC PLAN / CERN / LHC / HL-LHC PLAN

3.) The LHC will begin upgrading their magnets, pushing protons to collision energies of 14 TeV. 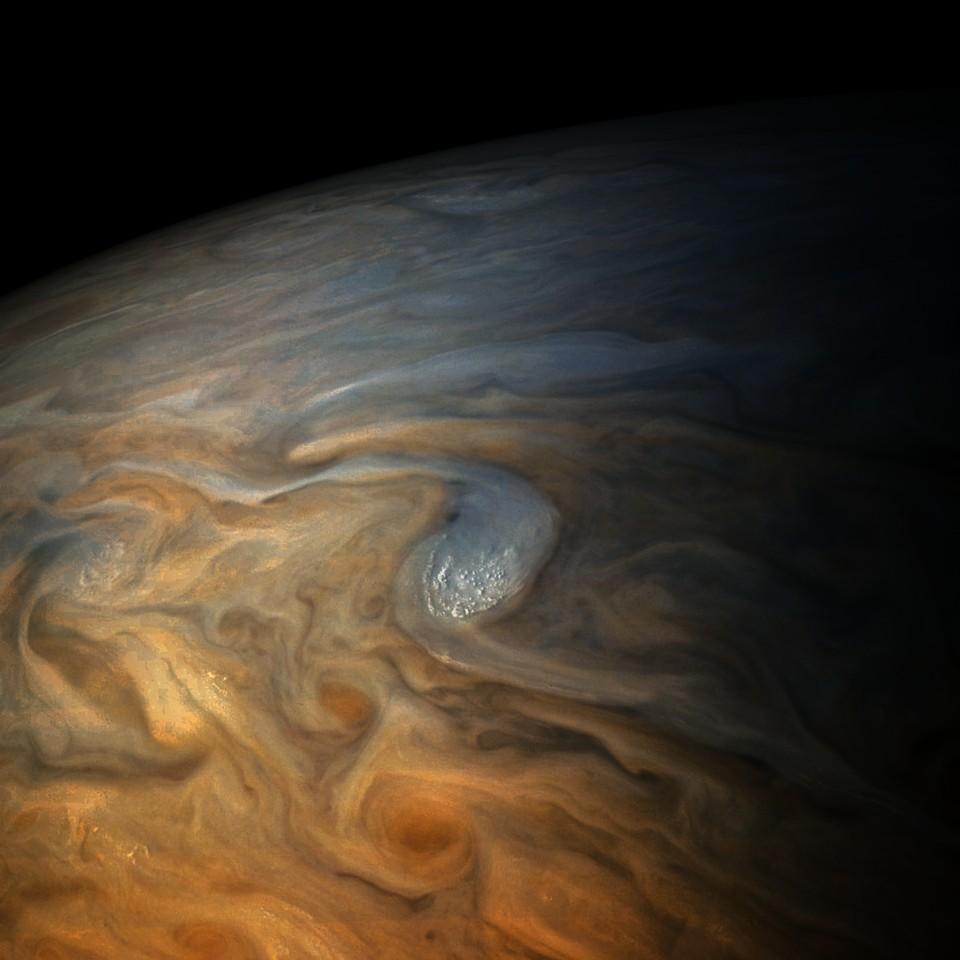 An image of Jupiter’s cloudtops as seen during a 2017 close pass (perijove) encounter of Jupiter with the Juno probe, stitched together to provide a partial view of the planet.NASA/SWRI/MSSS/GERALD EICHSTADT/SEAN DORAN

2.) NASA’s Juno has successfully imaged all of Jupiter, and could release a superior Jovian map. 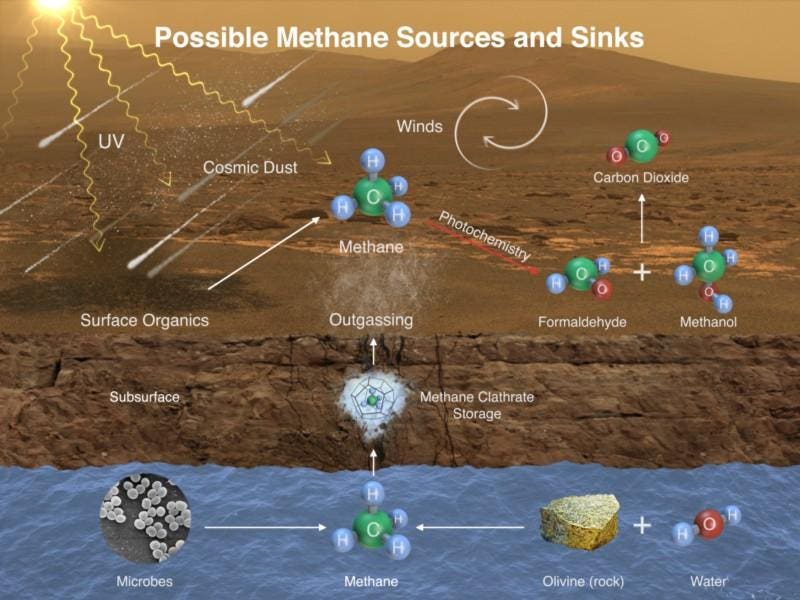 There are multiple potential pathways for methane to be produced on Mars, including the biological and geological. It’s also possible that both contribute.NASA/JPL-CALTECH/ESA/DLR/FU-BERLIN/MSSS

1.) ExoMars and Curiosity will team up to observe trace gases like methane. 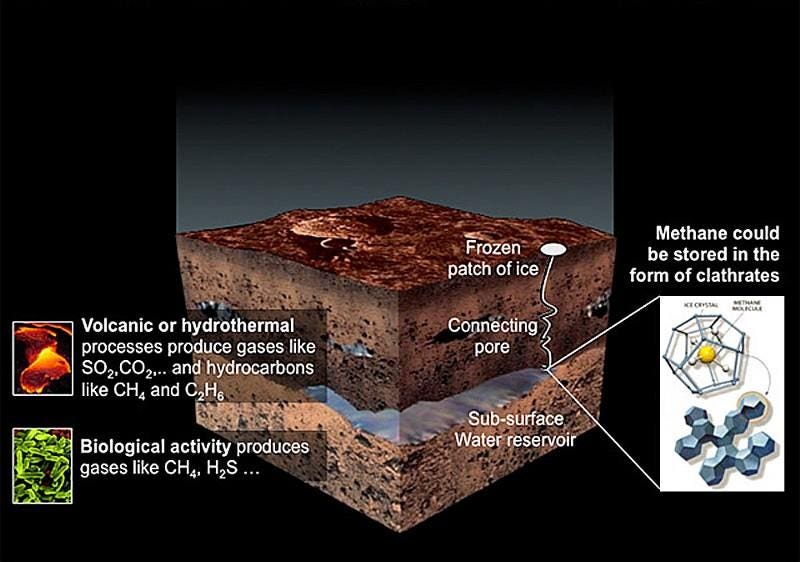 The most likely explanation for methane-producing activities on Mars include geological activity like hydrothermal water flows, which are almost a given if Mars is geologically active (which it appears to be) and has subsurface water (which it does). But we cannot rule out biology yet, either.METHANE WORKSHOP, FRASCATI ITALY, VILLANUEVA ET AL. 2009, ESA MEDIALAB, NASA