A new report by Fleet Carma has revealed volume deliveries of the Tesla Model 3 in Canada over the last two quarters have helped boost electric vehicle (EV) sales in the country to a new record high. Surpassing 13,000 units during the last quarter, EV sales now represent over 8% of new car sales in Canada (via Electrek). 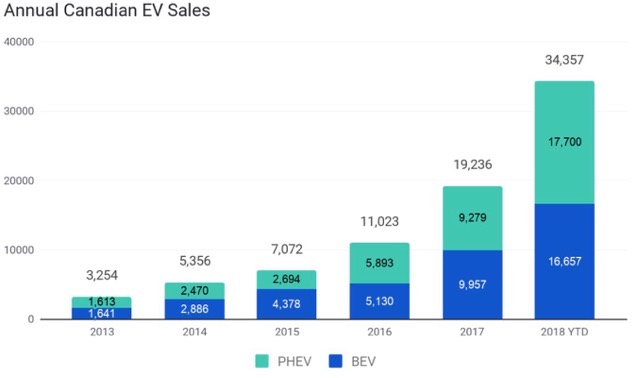 The source notes that EV sales in the country have seen an impressive 166% increase in the past one year, pushing the total number of electric vehicles sold in 2018 to more than 35,000 units. At the current growth rate, Canada is speculated to add more EVs in 2018 than it did over the last 3 years combined:

The start of volume deliveries of the Tesla Model 3 over the last two quarters made a big difference this year in Canada. Tesla delivered almost 5,000 Model 3 in the country over the past 6 months and the vehicle remained the best selling plug-in during the last quarter, according to Fleet Carma’s numbers.

Tesla also contributed with Model X and Model S deliveries, which were both up over the last 3 months – now taking the 4th and 5th spots in the country.

While Ontario ending its EV incentive program is expected to have a significant impact on the situation, as it has added more EVs than any other province in 2018, Quebec and British Columbia are, however, still going strong.