How a key protein boosts memory, learning in the adult brain

A protein called netrin may boost learning and memory by strengthening neural connections in the adult brain.

This is according to recent research led by the Montreal Neurological Institute and Hospital (The Neuro), a teaching and research institute of McGill University in Canada.

Scientists already knew that netrin is essential for the development of the embryonic and infant brain, where it helps make connections between brain cells, or neurons.

The recent research reveals that the protein also strengthens those neural connections, or synapses, in the adult brain’s hippocampus, an area that is involved in memory and learning.

The journal Cell Reports recently published a paper on the study, which the team conducted on cells from developing and adult rat brains.

“It was a mystery,” comments senior study author Dr. Timothy E. Kennedy, who runs a research laboratory at The Neuro, “why neurons would continue making netrin in the adult brain after all the connections had already been made in infancy.”

According to Dr. Kennedy, the scientists saw that a neuron releases netrin when it becomes active. The protein strengthens the connection to a neighboring neuron by signaling the two neurons to “make the synapse stronger.”

The recent study follows a long train of work that started nearly 7 decades ago when Donald Hebb, a psychology professor at McGill University, proposed his ideas of how the brain learns and makes memories.

What later acquired the title Hebbian Theory, his ideas aimed to explain how neural circuits develop as a result of experience. 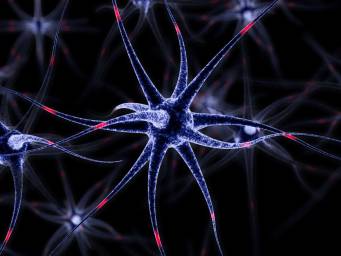 Hebb maintained that the strength or weakness of synaptic connections depends on how often they are used: the more they are used, the stronger and faster they become.

In his 1949 book The Organization of Behavior: A Neuropsychological Theory, he described how he imagined the process of synapse strengthening. When one neuron is close enough to another and keeps firing it, “some growth process or metabolic change takes place in one or both cells.”

“We’re saying,” explains Dr. Kennedy, “that this new molecular mechanism, which we discovered 69 years later, is central to this theory.”

It was the publication in 1957 of a groundbreaking paper by Brenda Milner, who completed a doctorate at The Neuro under Hebb’s supervision, that introduced the idea that the brain’s hippocampus plays a crucial role in some types of memory and learning.

“If you boil it down to one molecule,” Dr. Kennedy continues, “the regulated release of netrin is essential for the kind of synaptic changes that underlie the changes in the neuron that are involved in learning and memory, which was what Milner was talking about.”

He and his colleagues also observed that, in order to strengthen the synapses, netrin has to be released into “extracellular space.”

This made them wonder what additional opportunities to interact with other neurons this might provide.

Gene studies have implicated netrin involvement in diseases that destroy brain tissue, including amyotrophic lateral sclerosis, Parkinson’s disease, and Alzheimer’s disease. However, these have not identified any underlying mechanisms.

Overall, the work markedly advances our understanding of how the brain forms and stores memories, says the team.

Dr. Kennedy suggests that an ideal way to preserve memory function would be to have drugs that target molecular activity at synapses.

Recent studies of the adult brain have uncovered many inactive synaptic connections. There is nothing wrong with them — they are just “turned off, like light bulbs,” he explains.

He speculates that there might be “a reservoir of synapses that can be used to change the strength of connections between neurons.”

If that proves to be the case, he and his colleagues believe that they have “found a molecular mechanism to turn on those synapses.”

With such ideas in mind, they now plan to find out what happens to neurons when they supply or deprive them of netrin.