How you react to stress may predict brain health

Our emotional response to a daily stressful situation, such as being stuck in traffic, may affect our brain health, particularly in old age.

Prolonged chronic stress can lead to a wide range of adverse health consequences, from diabetes, heart disease, and sexual dysfunction, to mental health conditions, such as depression, burnout, post-traumatic stress disorder (PTSD), and even schizophrenia.

Zooming in on the effects that stress has on the brain, recent studies have suggested that high levels of the stress hormone cortisol may impair memory.

But how do small, daily stressors affect the aging brain? New research, led by Robert Stawski, an associate professor in the College of Public Health and Human Sciences at Oregon’s State University in Corvallis, suggests that it is not so much the stressful events in themselves, but our reactions to them that harm our brain health.

Specifically, Stawski and colleagues examined how seniors’ response to everyday stressors, such as a traffic jam, affects their cognitive health.

Stawski and colleagues examined 111 seniors aged between 65 and 95 for 2.5 years. Throughout the study period, the researchers evaluated the participants’ cognitive health using standardized assessments every 6 months.

Some of these assessments included asking the seniors to look at two sets of numbers and then say if the same numbers appeared in the two sets, albeit in a different order.

Previous studies have suggested that performance in these tests is an indicator of so-called response time inconsistency — a marker of impaired cognitive processing and poor brain health. 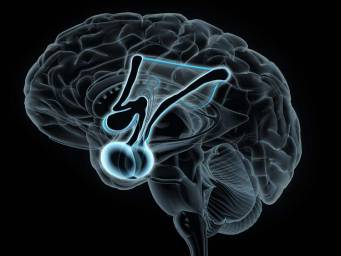 Stress-regulating brain area larger in depression, bipolar
The left hypothalamus may play a key role in these mental health conditions.

The seniors rated their feelings during a stressful moment using a range of positive and negative emotions, as well as a scale of intensity. Finally, they also completed a checklist on physical symptoms.

Overall, the study found that people whose response to daily stressors involved more negative emotions and were of higher intensity had higher inconsistencies in their response time, suggesting poorer mental focus and brain health.

The research also revealed significant age differences. For instance, the older participants — who were in their late 70s and up to their late 90s — were most affected. That is, their high-stress reactivity correlated strongly with worse cognitive performance.

However, for those in their late 60s to mid-70s, more stress seemed to benefit their cognitive health. “These relatively younger participants may have a more active lifestyle to begin with, more social and professional engagement, which could sharpen their mental functioning,” Stawski speculates.

The study’s lead investigator adds that older seniors should pay more attention to their emotional response to daily stressors and try to reduce their stress where possible to preserve their cognitive health well into old age.

“We can’t get rid of daily stressors completely,” Stawski says, “[b]ut endowing people with the skills to weather stressors when they happen could pay dividends in cognitive health.”

“These results confirm that people’s daily emotions and how they respond to their stressors play an important role in cognitive health […] It’s not the stressor itself that contributes to mental declines, but how a person responds that affects the brain.”

The findings are highly relevant, adds Stawski, given that the population aged 80 and above is the “world’s fastest growing age group.” Indeed, a report issued by the National Institutes of Aging in 2009 found that the world’s “oldest-old” are “the fastest growing component of many national populations.”

In this context, brain health and cognition are particularly important, as the prevalence of Alzheimer’s disease and other forms of dementia are on the rise globally, along with the aging population.