This is how your brain predicts future events

A new study explores how the brain can anticipate events, and what happens to this mechanism in some neurodegenerative conditions.

Anticipatory timing is, in part, what allows us to make the most appropriate decisions in a very dynamic world.

But what does this process rely on?

A new study conducted by researchers from the University of California, Berkeley, explains that, in anticipating an occurrence, the human brain counts on two distinct systems.

“Whether it’s sports, music, speech or even allocating attention, our study suggests that timing is not a unified process, but that there are two distinct ways in which we make temporal predictions and these depend on different parts of the brain,” says lead study author Assaf Breska, a postdoctoral researcher in neuroscience.

“Together,” states senior study author Prof. Richard Ivry, “these brain systems allow us to not just exist in the moment, but to also actively anticipate the future.”

One system, the researchers found, allows us to anticipate future occurrences based on our past experiences, while another system is based on the identification of rhythmic patterns.

How do these two systems work, however? Do they “kick in” at different times, depending on the context to which we need to respond?

Answering this question, the study authors believe, could also help us better understand how the brain works in different neurodegenerative conditions.

In turn, this would allow specialists to come up with better strategies to care for people living with such a condition.

The brain regions tasked with ‘timing’

In the recent study — the findings of which now appear in the journal PNAS — the scientists worked with people with either Parkinson’s disease or cerebellar degeneration.

Both of these conditions are characterized by problems with coordination and balance, though they seem to affect different regions of the brain.

While Parkinson’s impacts neural pathways in the basal ganglia, which is a region embedded deep inside the cerebral cortex, in cerebellar degeneration, it is nerve cells in the cerebellum that progressively die.

The researchers compared the ways in which people with each condition used temporal cues to respond to different tests. 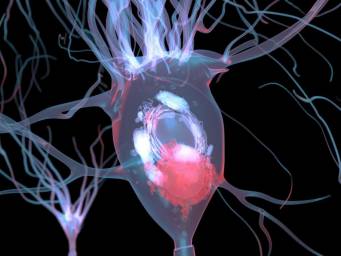 All of the study participants responded to two different sequences of colored squares flashing out on a computer screen. In the first exercise, the colored squares succeeded one another at a steady, rhythmic pace.

In the second exercise, the colored squares succeeded one another in a different pattern that did not follow the same steady rhythm.

During these tests, the researchers observed that participants with Parkinson’s disease tended to perform better on the complex pattern exercise, while those with cerebellar degeneration responded better to the rhythmic succession test.

These findings allowed the team to identify which brain areas were linked to which anticipatory timing system. The authors concluded that rhythmic timing corresponds to the basal ganglia, whereas interval timing — based on memories of previous experience — corresponds to the cerebellum.

Importantly, the researchers add, this challenges previous theories suggesting that anticipatory timing is the result of a monolithic system.

“Our results suggest at least two different ways in which the brain has evolved to anticipate the future,” explains Breska.

“A rhythm-based system is sensitive to periodic events in the world such as is inherent in speech and music. And an interval system provides a more general anticipatory ability, sensitive to temporal regularities even in the absence of a rhythmic signal.”

Also, the authors add, the study suggests that should one of these two systems stop working properly, the brain may actually be able to rely on the other one for anticipatory timing. This may have important implications for how specialists manage the care of people with Parkinson’s disease or cerebellar degeneration.

“Our study identifies not only the anticipatory contexts in which these neurological patients are impaired, but also the contexts in which they have no difficulty, suggesting we could modify their environments to make it easier for them to interact with the world in face of their symptoms,” notes Breska.

The researchers believe that some ways of assisting people in coping with damage to one of the two “timing” systems in the brain could include apps and computer games designed to train the brain, as well as deep brain stimulation techniques.