In 1993, two papers reported observations of an astronomical phenomenon called gravitational microlensing. The results showed that microlensing could be used to probe the elusive dark matter that is thought to pervade the Universe.

One of the biggest mysteries in astronomy is the nature of dark matter, which is thought to account for about 85% of the matter and 25% of the total energy in the Universe1. There are several strong pieces of evidence for dark matter2. In particular, spiral galaxies such as the Milky Way have flat rotation curves3 — graphs that show the orbital speed of stars as a function of their distance from the galactic centre. This property indicates that spiral galaxies are surrounded by large quantities of unseen matter. Dark matter has not yet been detected directly, so its identity is still unknown. But 25 years ago, Alcock et al.4 and Aubourg et al.5 reported observations in Nature that paved the way to a better understanding of its properties.

In 1986, the Polish astronomer Bohdan Paczyński suggested an observational test6 to determine whether dark matter present in the halo of our Galaxy is composed of astronomical bodies such as small stars, brown dwarfs, neutron stars or black holes. Such bodies are intrinsically faint and would therefore be difficult to see in the Galactic halo from Earth.

According to Einstein’s general theory of relativity, these massive compact halo objects (MACHOs) could act as lenses, focusing light and amplifying the observed brightness of stars in nearby galaxies (Fig. 1). This phenomenon, called gravitational microlensing, is sensitive to even low-mass lenses. Paczyński therefore proposed that, by monitoring stars in nearby galaxies, astronomers could look for microlensing events and verify whether MACHOs can account for dark matter.

Conceptually, this test is simple. But in practice, it requires millions of stars to be monitored over a period of years. The reason is that the microlensing events have an extremely low probability of being detected, because the star, the MACHO and the observer all need to be aligned. At that time, it was a challenge to observe such a huge number of stars, accurately measure their brightness and analyse the resulting data. 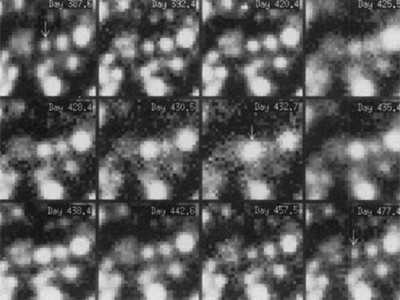 Read the paper: Possible gravitational microlensing of a star in the Large Magellanic Cloud

In October 1993, Alcock et al. and Aubourg et al.independently announced the first candidates for microlensing events caused by dark objects in the Galactic halo. Alcock and colleagues used a dedicated 1.27-metre-diameter telescope. The telescope was equipped with two charge-coupled device (CCD) cameras that had a field of view of 0.5 square degrees, which was considered large at that time. The authors spent a year monitoring 1.8 million stars in a nearby galaxy known as the Large Magellanic Cloud, and discovered one microlensing candidate. By contrast, Aubourg and colleagues used photographic plates that had a field of view of about 25 square degrees. They monitored 3 million stars in the Large Magellanic Cloud for more than three years, and detected two microlensing candidates.

The candidates all had fairly symmetrical light curves — plots that show the observed brightness of a star as a function of time (Fig. 1). Both teams obtained light curves in two different colours (blue and red) and found that the shapes of these plots were extremely similar. Such symmetrical and achromatic light curves are in agreement with what is expected for microlensing events.

However, the light curves of the two candidates obtained using photographic plates had a low signal-to-noise ratio. And for all three candidates, there was incomplete coverage of the brightening event, especially close to the peak brightness. Furthermore, although the frequency of the observed candidates was consistent with theoretical predictions, their low number prevented any firm confirmation that the light curves were products of microlensing — rather than light curves of a previously unseen class of astronomical object of varying brightness. 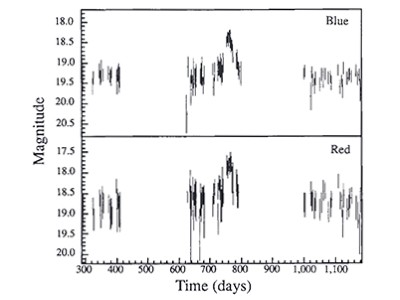 Read the paper: Evidence for gravitational microlensing by dark objects in the Galactic halo

Despite these limitations, the potential discovery of microlensing by dark objects in the Galactic halo was spectacular. It demonstrated the feasibility of using microlensing to detect extremely faint stellar-mass or sub-stellar-mass bodies in the Galactic halo and, as a result, the feasibility of verifying whether dark matter in spiral galaxies is composed of such bodies. The microlensing surveys showed that it was possible to monitor millions of stars over years and to analyse the resulting enormous data sets, which was a breakthrough in observational astronomy.

Motivated by the work of Alcock et al. and Aubourg et al., microlensing surveys improved enormously over the following 25 years, reaching capabilities to observe about 1 billion stars per night7. The huge data sets of high-quality light-curve data revolutionized many fields of astronomy — for example, the study of pulsating stars, extrasolar planets and star formation8,9. Moreover, millions of objects of varying brightness and thousands of microlensing events were detected, mostly in the direction of the Galactic bulge (a spherical structure near the centre of our Galaxy).

However, on the basis of observations of 35 million stars over eight years, only four microlensing events in the direction of the Large Magellanic Cloud were detected10. If these signals were caused by MACHOs, the contribution of these objects to the mass of the Galactic halo must be low (a few per cent). But the more likely explanation of these detections does not involve MACHOs at all, and relies on the lensing of stars in the Large Magellanic Cloud by other objects in this galaxy.

Either way, MACHOs cannot account for all of the dark matter in spiral galaxies, and the identity of this mysterious matter remains unknown. The microlensing experiments ultimately gave a negative result. However, they have had a huge impact on many fields of modern astrophysics and have provided a lot of excitement and stimulation for the whole astronomical community.