A team of neuroscientists recently reached a historic neuroanatomical milestone.

Since ancient times, there has been exploration of the anatomy of the human brain and its functions. However, the discovery of the different types of cells in the human brain is largely a result of more recent history.

The foundation for modern neuroanatomy was established by Santiago Ramón y Cajal, a Spanish neuroscientist and recipient of the 1906 Nobel Prize in Physiology or Medicine, with his volume of research titled “Textura del Sistema Nervioso del Hombre y los Vertebrados” created during 1899-1904. Fast forward to over a century later, another historic neuroanatomical milestone has been achieved by a global team of neuroscientists — the discovery a new type of human brain cell, called the rosehip neuron.

Scientists from around the world collaborated on this historic discovery and published “Transcriptomic and morphophysiological evidence for a specialized human cortical GABAergic cell type” in Nature Neuroscience in 2018. Researchers from the University of Szeged, the Allen Institute for Brain Science, the J. Craig Venter Institute, the Hungarian Academy of Sciences, Illumina, and the University of California, San Diego, are affiliated with this landmark study.

In the discovery, the research team identified a specialized GABAergic neuron sub-type in the human cortex based on scientific evidence from physiology, morphology and transcriptomics. In the research, the postmortem brains from two men in their 50s were studied. They used unbiased single-nucleus RNA sequencing to find 10 GABAergic interneuron subtypes with combinatorial gene signatures in layer 1 of the human cerebral cortex.

The team found a group of compact human interneurons, with bushy branching, and axonal boutons that resemble large rosehips, the bulbous fruit of rose plants, in the human brain. Rosehip neurons are inhibitory neurons. Inhibitory interneurons help slow or cease excitation. When inhibitory neurons are activated, they release GABA, a neurotransmitter that hyperpolarizes the postsynaptic neurons. GABAergic neurons make up an estimated 20-25% of all neurons in the human cortex.

The study does not conclude that rosehip neurons are unique to humans only — additional research would be required to prove or disprove that hypothesis.  However, similar anatomical features have not been found in rodents, only in humans thus far. This neuroanatomical difference may explain in part why neuroscience studies conducted using rodents have may different outcomes from those done with human brain tissue. Now that rosehip neurons have been discovered, researchers plan to look in other areas of the human brain for its presence. 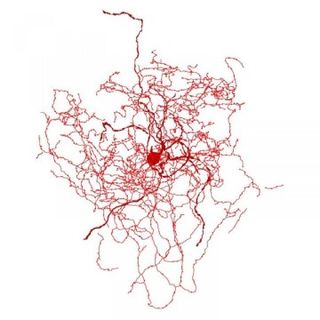