Scientists at the Cern nuclear physics lab near Geneva are investigating whether a bizarre and unexpected new particle popped into existence during experiments at the Large Hadron Collider.

Researchers on the machine’s multipurpose Compact Muon Solenoid (CMS) detector have spotted curious bumps in their data that may be the calling card of an unknown particle that has more than twice the mass of a carbon atom.

The prospect of such a mysterious particle has baffled physicists as much as it has excited them. At the moment, none of their favoured theories of realityinclude the particle, though many theorists are now hard at work on models that do.

“I’d say theorists are excited and experimentalists are very sceptical,” said Alexandre Nikitenko, a theorist on the CMS team who worked on the data. “As a physicist I must be very critical, but as the author of this analysis I must have some optimism too.”

Senior scientists at the lab have scheduled a talk this Thursday at which Nikitenko and his colleague Yotam Soreq will discuss the work. They will describe how they spotted the bumps in CMS data while searching for evidence of a lighter cousin of the Higgs boson, the elusive particle that was discovered at the LHC in 2012.

The Large Hadron Collider creates particles by smashing subatomic protons into one another at close to the speed of light. When the protons meet, the energy in the collision is converted into mass, and so particles, in line with Einstein’s equation, E=mc2.

Many particles created in the LHC are highly unstable and immediately decay into lighter, more stable particles such as photons and electrons. It is by looking for an excess of these particles, apparent as a bump in the data, that physicists tend to find new particles. For example, one way the Higgs boson betrayed its existence was through the unusually high number of photons recorded in collisions in which the particle was made.

But particle physics is no easy pursuit. To the endless frustration of its practitioners, bumps in data produced by nothing more than statistical fluctuations pop up all the time. The best way to distinguish between these and Nobel prize-winning discoveries is to analyse more and more data: statistical flukes always vanish with time.

In two separate analyses, the CMS team found data that pointed to a build-up of muons, or heavy electrons, in their detector. If real, the data indicates a new particle with a mass of 28GeV or 1 billion electron volts, slightly less than a quarter of the mass of a Higgs boson. Whatever it is, it is not the particle Nikitenko and his colleagues were looking for.

To complicate matters further, the bumps were more pronounced in the LHC’s low energy collisions than in more energetic collisions the machine performed after an upgrade. That could be explained, said Nikitenko, if more “background” particles are produced at higher energies that then obscure the signal.

Because the analysis is so time-consuming, it could take the CMS team another year to confirm or rule out the existence of a new particle. But Karl Jakobs, spokesperson for the Cern team that works on Atlas, the LHC’s other multipurpose detector, said it was checking its own data for signs of the proposed particle. “We are working on a similar analysis of the Atlas data, however I cannot yet give you a timeline when the results will become public,” he said.

For Atlas to cross-check the result was “crucial”, Nikitenko said. “If it is confirmed by Atlas it will be the real thing. It will be really something terribly new.”

One independent study has already reported potential evidence for the particle. Arno Heister, a former member of the CMS team who knew about the bumps in the data, analysed older results collected by Aleph, a detector on Cern’s previous particle accelerator known as the Large Electron-Positron Collider (LEP). He found a similar bump at 30GeV. “This excess, if real, is something very unexpected,” he told the Guardian. 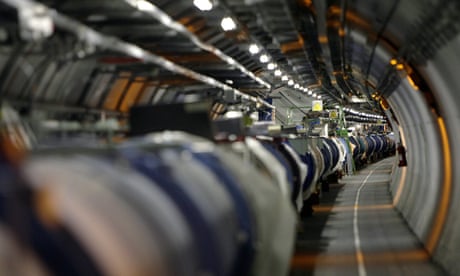 Georg Weiglein, a theorist on the German Electron-Synchrotron machine (DESY) said it will be hard to come up with a model that has a particle like the one the CMS bump calls for. “This does not exclude the possibility that such a signal could actually exist. On the contrary, it would be even more exciting if a signal were observed that does not seem to fit into our present models,” he said. “Further experimental information is eagerly awaited.”

Michelangelo Mangano, a researcher at Cern, said: “Of course theorists are always happy when some anomaly shows up in the data. And I am confident many colleagues have started looking into this. However it is a bit early to get excited.”

“Given that Atlas has yet to release their analysis, and given that much more data is on tape even for CMS, it is clear that the effect will soon be confirmed or diluted away,” he said.