Thalmic Labs, a high-profile Kitchener startup, will soon be fitting people with the company’s new smart glasses called Focals at their two boutique showrooms: one in Toronto and another in Brooklyn. – Ian Willms , Special to the Waterloo Region Record 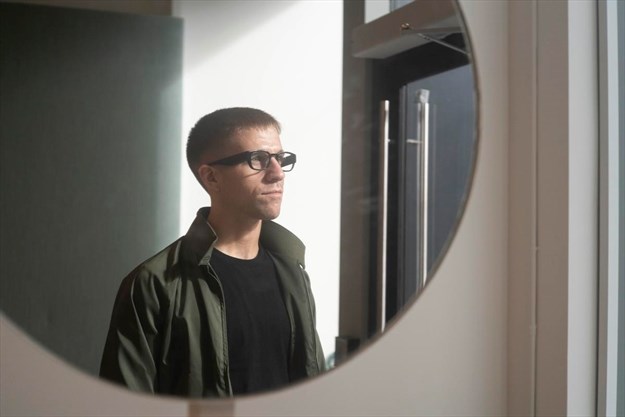 Aaron Grant, one of the co-founders of Thalmic Labs, is wearing a pair of the company’s new smart glasses called Focals. They are all betting Focals are the smart glasses that people will actually want to wear every day. – Ian Willms , Special to the Waterloo Region Record

KITCHENER — Thalmic Labs and the Myo are out. North Inc. and Focals are in.

One of this region’s high-profile startups announced Tuesday it will make and sell the next generation of smart glasses it has secretly developed during the past four years. It will also stop making and selling the Myo armband, which turns electrical signals from moving muscles into computer commands.

The three founders — Stephen Lake, Matthew Bailey and Aaron Grant — always said they were about finding new ways to interact with computers. And they are betting Focals are the smart glasses that people will actually want to wear every day.

Embedded within the right lens is a circle-shaped piece of holographic film. They are the first company to do that. A tiny projector beam hits that holographic film and it bounces to the back of the eye, the retina, where the images are displayed. There is no screen. Nobody around you can see the content you are viewing.

Along with this new product is a new brand — North Inc., and two boutique showrooms for Focals, one in Toronto and another in Brooklyn.

“We did not dislike the name Thalmic, but it wasn’t a name that we came up with and carefully considered in the context of building a great, long-lasting, global consumer brand,” said Grant in an interview inside a gleaming, white showroom on Ossington Avenue where his company will soon be fitting people with smart glasses that sell for $1,299.

They wanted to rebrand with a name that is easy to say, easy to spell.

“But also has some meaning behind it,” said Grant. “North can refer to us being in Canada, from the north. The idea of the North Star. There are a lot of things that can tie in there, and we just think it is a great name to go forward with.”

Consumers call them smart glasses. The tech sector talks about heads-up displays. No matter what you call them, it is a computer you wear on your face, and so far nobody has produced one with widespread consumer appeal.

Earlier this year Intel pulled its smart glasses, Vaunt, from the market.

Masters of the grape

After huge amount of hype, Google Glass was shelved. The devices looked clunky and sparked bar fights when people did not want to be recorded. The Google product led to a new pejorative — Glasshole.

Grant said North’s research and development team studied what happened to earlier versions at other companies.

“And it taught us some important lessons,” said Grant. “Take a design-first approach, that would be a big one for sure.”

Focals come in two styles — classic and round. And three colours — black, tortoise and grey. Each pair must be custom fitted to the user’s face. So, the company is opening two showrooms — 113 Ossington Ave. in Toronto and 178 Court St. in the Cobble Hill section of Brooklyn.

Focals are designed to look stylish, and the technology unobtrusive. No one ever called Google Glass stylish.

“We think that is absolutely necessary for a product like this to be successful,” said Grant.

He is wearing a pair of black Focals. He can quickly see the date and time, read and respond to text messages, glance at weather forecasts, see calendar notifications and reminders, get directions, communicate with Amazon’s home assistant Alexa and summon an Uber.

He controls the smart glasses with his voice or a small toggle at the side of a ring on his index finger. Focals are linked to the user’s smartphone with Bluetooth.

“Early on in this process of growing the team to focus on this product we hired an eyewear designer from an eyewear company, not technology background,” said Grant.

The eyewear designer — Marie Stipancik from Clearly Contacts — was hired. Her design team worked closely with the engineers.

“There is lots of back and forth there and figuring out how to make this happen, but we made it very clear that the design of these is kind of paramount,” said Grant.

Thalmic Labs was founded in 2012. After raising $134.5 million, it quickly became one of the leading startups in this region, and now has nearly 500 employees.

Preorders for Focals can be placed online. Buyers must visit the North showrooms in Toronto and Brooklyn to be fitted. The showrooms will open early in November and will have fitting booths equipped with 11 cameras.

The cameras will scan the faces of buyers to produce a 3D model so the Focals are a custom fit. Focals can be made with clear glass or prescription lenses for the same price. Focals can also be worn with contacts.

A proper fit is critical because of the technology — a tiny projector bounces a beam off one lens and into the user’s eye.

“You don’t really have a screen, there is no rectangular screen here, just information, pixels lit up, you don’t see anything else around that,” said Grant.

“So it is very different than any other screen or display you have seen before,” said Grant. “It is not a screen. It’s showing you information when you need it, where you need it and then getting out of your way.”

Research and development began shortly after the company moved into its headquarters on Charles Street in downtown Kitchener. Originally, it hoped to apply its new technology for controlling computers to the next generation of personal devices.

“The next generation did not end up happening, and was not anywhere on the horizon,” said Grant.

So they decided to concentrate on creating and bringing to market the first pair of all day, every day smart glasses. As progress was made, they approached every high-tech contract manufacturer in the world with designs and specs for different parts.

“And they looked at our drawings and said: ‘You guys are crazy, there is no way, this can’t be done, these tolerances are ridiculous, this is not going to happen,'” said Grant.

So they bought a used production line from BlackBerry, and started manufacturing Focals out of a plant on Roger Street in Waterloo.

“This is really just the beginning of the road for Focals,” said Grant. “We are really excited as a company about where we can take this product.”

Future updates could include the ability to send and receive video, or display sheet music for a musician or the text of a speech for a public presentation.

North opened showrooms on Ossington Avenue and in Cobble Hill in Brooklyn because of the people who live there.

Both neighbourhoods have early adopters, and advocates for new tech, he said.

“Part of the reason for starting out in Toronto and Brooklyn, and rolling out really slowly, is that we have the opportunity to learn from those early users and iterate on that, and make the product even better than it is today,” said Grant.