Thought black holes were donut-shaped? It turns out they’re more like deadly fountains

Japanese boffins argue for a new spin on astrophysics 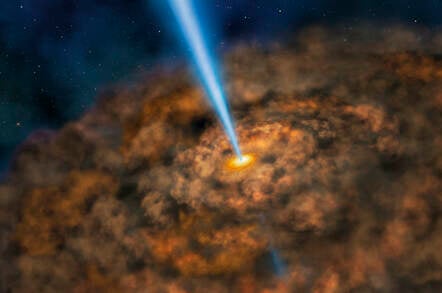 Black holes aren’t shaped like donuts after all, and actually look like water fountains instead, according to new research.

“Previous theoretical models set a priori assumptions of rigid donuts,” said Keiichi Wada, a theoretical physics professor at Kagoshima University, Japan. Scientists believed that as surrounding matter is sucked into the void, it piles up around the black hole creating a donut-like structure.

A paper published in The Astrophysical Journal, however, shows that the particles of gas gush out and are not rigidly held in place in an accretion disk. The researchers examined a supermassive black hole in the Circinus Galaxy, 14 million light-years away from Earth, using ALMA (Atacama Large Millimeter/submillimeter Array), an astronomical interferometers made up of 66 radio telescopes. The galaxy contains an active galactic nucleus (AGN), a luminous source of energy that is created from greedy black holes gobbling matter.

They compared their findings with a model of the black hole simulated using a supercomputer. “Rather than starting from assumptions, our simulation started from the physical equations and showed for the first time that the gas circulation naturally forms a donut. Our simulation can also explain various observational features of the system.”

That ‘donut’, however, isn’t rigid. Instead, it’s made up lots of different gaseous parts. Cold molecular gas getting sucked into black hole creates an accretion disk. As it edges closer to the abyss, the gas heats up and the molecules are ionized. The atoms are deflected above and below the disk and come crashing back down onto it, like water being sprayed from a fountain. A big killer fountain. 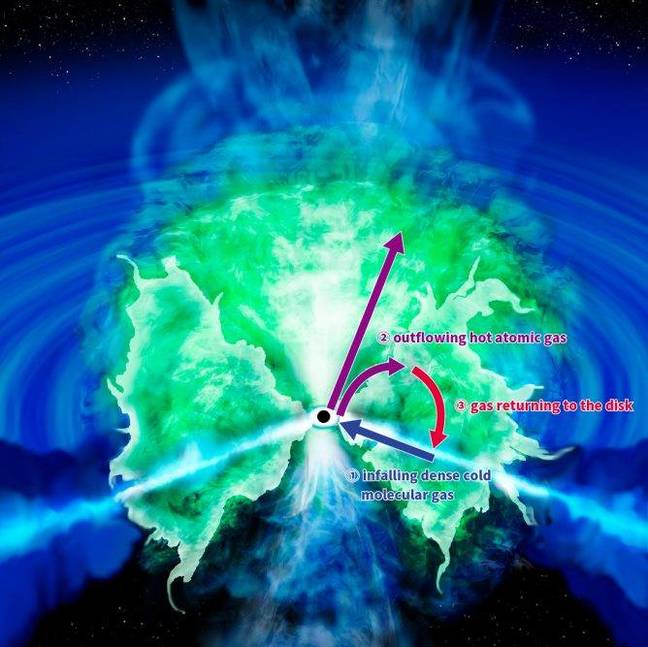 “Through comparisons with our model predictions based on the radiation-driven fountain scheme, we indicate that atomic outflows are the driver of the geometrical thickness of the atomic disk. This supports the validity of the radiation-driven fountain scheme in the vicinity of this AGN, which would explain the longstanding mystery of the physical origin of the AGN torus,” the paper’s abstract said.