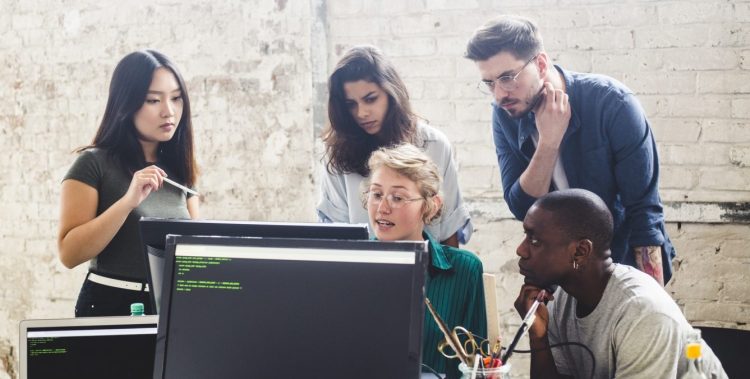 No-code platforms, which let users create apps leveraging tools that don’t require programming knowledge, are gaining popularity in the enterprise as their value becomes apparent. According to a 2021 TechRepublic survey, 47% of employees said that they currently use low-code — a version of no-code that involves minimal programming — and no-code solutions in their organizations, with 20% saying that they intend to adopt technology in the next 12 months. Markets and Markets predicts that by 2030, the global low-code and no-code development platform market will hit $187 billion in revenue. And by 2024, it’ll account for more than 65% of application development activity, Gartner anticipates.

One of the promises of no-code is improved automation. Specifically, proponents point to its potential to support “hyperautomation,” a term coined by Gartner to describe the concept that companies use to identify, vet, and automate business processes. Automation Anywhere, a software automation vendor, estimates that 70% to 80% of a typical rules-based process could automate by a no-code or low-code platform.Unmute

A relatively new company, Skael, offers a no-code platform focused on this type of automation. After launching in 2016, San Francisco, California-based Skael’s customer base expanded to teams at brands including Google, Asurion, and the San Diego Housing commission. Reflecting the growth — and investors’ general enthusiasm — Skael today announced that it raised $38 million in a series A financing round led by RTP Global with participation from Bonfire Ventures and Dell Technologies Capital, bringing the company’s total to $42 million.

“Automation is the fastest-growing enterprise technology segment, and its demand is only increasing due to a combination of macroeconomic factors,” Nadimpalli told VentureBeat via email. “It’s typical to measure return on investment in years, requiring very specific technical resources — both software and people — to design, develop, deploy, manage, and train end-to-end automation strategies … [But] implemented well, automation serves the enterprise purpose of business continuance [and unlocking growth.]”

Beyond this, Skael claims its platform can process PDFs and text-based documents such as contracts, training materials, and HR policies to search for answers to, “open domain” questions through “cognitive search.” Cognitive search — a technology that’s gained increased attention recently, prompting tech giants including Microsoft, Amazon, and Google to invest in its development — uses AI to ingest, understand, organize, and query digital content from multiple data sources at once.

“Modern-day work for the vast majority of the world is a copy-and-paste of the industrial revolution, burning employees out in jobs that have very little need for human intelligence, ingenuity, or creativity,” Nadimpalli told VentureBeat via email. “Instead of wrapping people around process and then around technology, it should be the other way around, with technology wrapped around people — [and] with process as the middle layer … Skael’s platform [pushes] out the design, development and deployment of digital employees to non-technical users, [resulting] in more engaged human employees and customers [whose] time is now spent on more purposeful and engaging work.”

The future of hyperautomation platforms like 75-employee Skael’s looks bright when considering the growing appetite for automation solutions. According to a 2022 survey commissioned by UiPath, an automation vendor and Automation Anywhere rival, 78% of companies say that they’re likely to invest or increase their investments in automation. A 2020 Zappier poll shows that about 40% of employees believe automation saves their business money.

But companies looking to embrace no-code automation face challenges on the road to deployment. A 2019 Appian survey found less than half of organizations have deployed intelligent automation — despite seeing the value in it. The top reasons they cited were struggling to adapt with the technology, failing to understand how AI would change anything, difficulty integrating automation with existing IT deployments, and the need to change IT culture and app development practices.

“Organizations in every region and industry are automating at least some business processes, yet only a slight majority have succeeded at meeting their targets,” McKinsey analysts wrote in a 2018 report. “[Specific] practices best support a successful automation effort: making automation a strategic priority, deploying technologies systematically, decentralizing governance, ensuring the IT functions’ involvement, internalizing automation’s costs and benefits, and prioritizing workforce management.”

“[We had] $7 million in annual recurring revenue in fiscal year 2021 and plan to grow over 240% in 2022,” Nadimpalli said. “The pandemic has driven unprecedented levels of introspection in human history, causing the so-called ‘great resignation’ on a global level. Suddenly, investments that raise employee satisfaction and engagement have a directly measurable return on investment, especially if they can be deployed in weeks versus months — [like Skael.]”